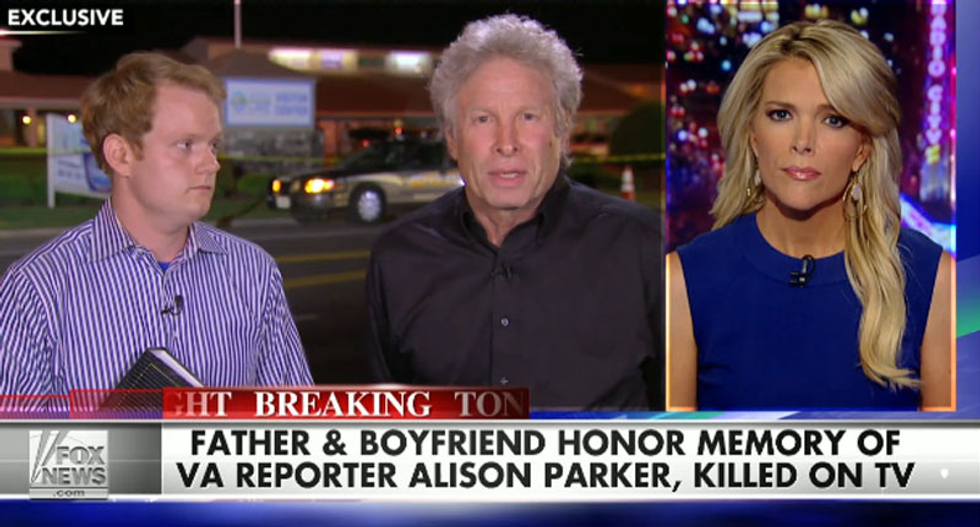 The father and boyfriend of slain journalist Alison Parker took to pro-gun Fox News on Wednesday night and vowed to push for policy changes that would prevent "crazy" people from getting guns.

Parker, 24, was gunned down while live on air Wednesday morning by Vester Flanagan, a former co-worker. Flanagan posted what appeared to be first-person video of himself shooting and killing Parker and photographer Adam Ward while they were reporting on tourism in Virginia. Vicki Gardner, a chamber of commerce official being interviewed by the WDBJ team, was wounded.

Flanagan posted an apparent confession on Twitter before leading authorities on a pursuit, then taking his own life.

Choking back tears at times and standing a short distance from the site of Flanagan's attack on his daughter, Andy Parker said pushing for legislation that requires background checks and closes loopholes in gun purchases will be his life's mission from now on.

Chris Hurst, Parker's boyfriend and WDBJ anchor, told host Megyn Kelly not to give any credence to Flanagan's accusation that Parker had made "racist comments," saying no one at the station had ever been intentionally rude or discriminatory toward him.

"Clearly, someone who has decided to premeditated, take action and kill two people in cold blood and try to kill a third is not someone who is making rational and lucid thoughts when he issues what you are identifying as a manifesto," Hurst told Kelly. "So I don't think you can take anything that he said in any of his writings and take it as something that is to be believed."

Andy Parker added that Flanagan was a "crazy man that got a gun and that's part two of where we're going."

Hurst then pointed out that he has reported on mental health issues since last year, and that it's important not to be quick to label Flanagan and avoid discriminating against people with mental health problems.

"But clearly something went wrong here, between him leaving our station and being able to purchase a gun and commit a premeditated act," Hurst said.

The men balked when Kelly began talking about the speculation that Ward had purposely turned his camera on Flanagan before succumbing to his injuries.

He went on to say that at 24, Parker lived a "great life" and loved what she did, and was extremely happy.

"I'm not going to let this issue drop," Parker continued. "We have got to do something about crazy people getting guns. And the problem that you guys have is that... next week it isn't going to be a story any more and everybody's going to forget it. But you mark my words, my mission in life... I'm going to do something -- whatever it takes to get gun legislation to shame...legislators into doing something about closing loopholes and background checks and making sure crazy people don't get guns."

It's Alison's legacy, he said.