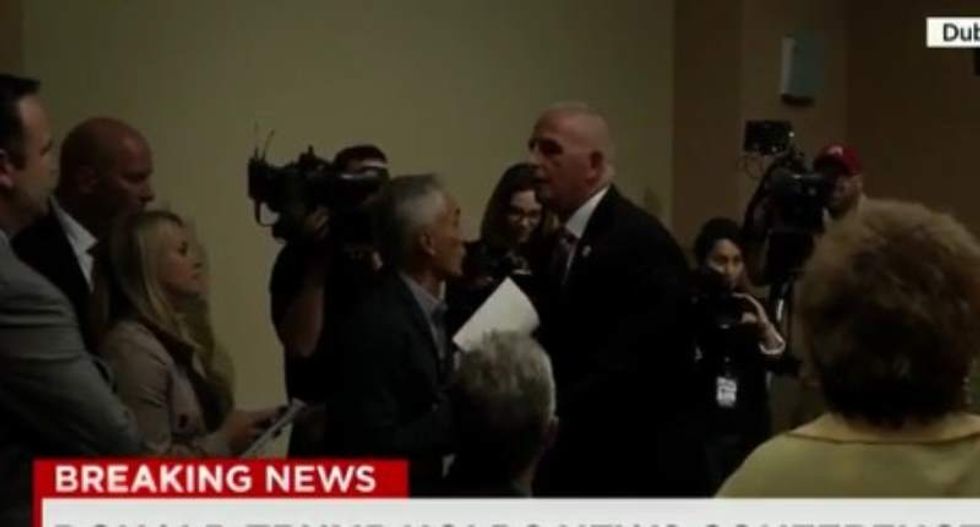 Fusion anchor Jorge Ramos is forced out of a press conference for GOP presidential candidate Donald Trump on Aug. 25, 2015. [CNN]

Fusion anchor Jorge Ramos was forcibly removed from a Donald Trump press conference on Tuesday after the GOP presidential candidate refused to take his question.

CNN posted footage of the encounter, in which Ramos attempted to ask Trump about his notion of deporting all of the country's 11 million undocumented immigrants. Trump refused to call on Ramos and took another question, before motioning to a security guard to remove Ramos.

"Go back to Univision," Trump tells Ramos as the host is being removed. Trump later reportedly called Ramos "a very emotional person."

Ramos has been critical of Trump for pushing the idea of mass deportations, saying the plan was impractical and referring to him as the "loudest voice of intolerance, hatred and division" in the country.

Vox reported on Tuesday that, despite Trump's assurances that he would win heavy support from Latino voters, his approval rating within that voting bloc currently stands at -51.

Update, 7:13 p.m. EST: CNN reported that Ramos was let back into the press conference, and allowed to ask his question.

Update, 7:15 p.m. EST: The Des Moines Register noted that it was also barred from attending the press conference. The newspaper, the largest in Iowa, was also shut out from covering Trump's appearance at the state fair earlier this month.

The video can be seen below.

Footage of the incident has also been posted online, and can be seen here.