Activist DeRay Mckesson destroys Jeb over ‘free stuff’ comment: ‘He hasn’t earned the stuff that he has’ 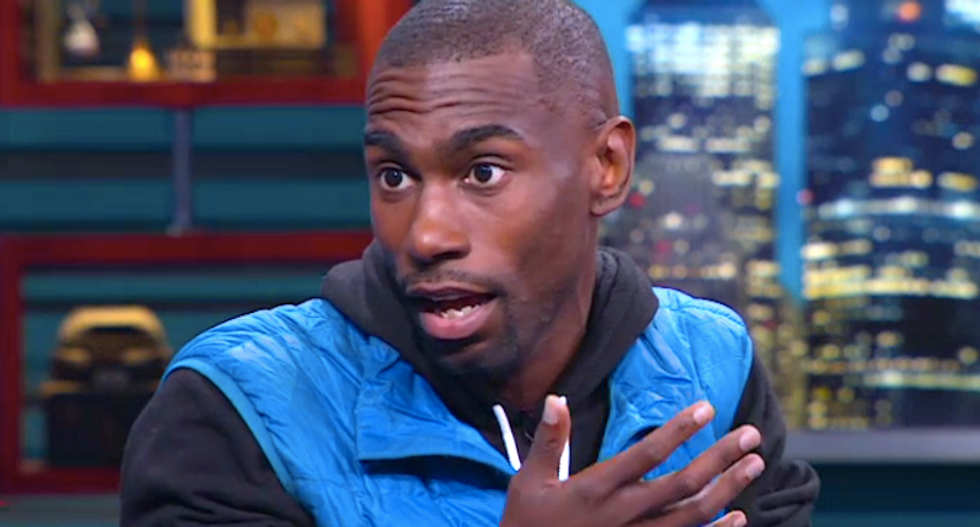 The "Nightly Show" host and his panelists agreed that was hard to hear from the wealthy son of one president and the brother of another.

"I never watched a black protest and heard, 'No free stuff, no peace,'" said "Nightly Show" contributor Mike Yard. "You don't hear that sh*t. We're usually asking for expensive stuff, like justice and equal rights and whatnot."

"I must be blacklisted from the blacklist, because I ain't never got sh*t," Yard said.

McKesson said Bush had ignored his own personal history.

"If free means you've gotten something you haven't paid for, he comes from a legacy -- he hasn't earned the stuff that he has," Mckesson said.

Wilmore asked the panelists why they thought black voters were perceived as having a "quid pro quo" arrangement with Democratic politicians.

"What we've seen from the Republicans is that they haven't talked about race beyond immigration, that there's, like, literally no language there yet," Mckesson said. "They talk as if history just didn't exist. They, like, sort of start history where they want it to, in a way that erases all the people that pay with their lives. Nothing has been free. I think that all the people who died, who were the enslaved and everybody else, wouldn't say that any of this would be free."

Mckesson said he and other activists had met with Sen. Bernie Sanders (I-VT), and he said they were scheduled to meet soon with fellow Democratic candidate Hillary Clinton.

"Hopefully we'll be meeting with the staff of the (Republican National Committee), as well," he said.

Wilmore and the panelists were baffled that Bush implied that black Americans had no aspirations, pointing to the hit TV show "Empire" and basically every rap song.

"We got everything in the world on that song -- there's my yacht, that's my mansion," Yard joked. "That's some aspirational sh*t right there."

Rory Albanese, a "Nightly Show" contributor, said racism was built into the foundations of United States history, and whites still benefit from that institutional imbalance.

"The whole history of the country is, we got here and just, like, slaughtered a whole bunch of people that lived here and stole people to build all our sh*t," said Albanese, who is white. "It's, like, no racism in any of that. What are you talking about? The whole thing is racism."

They brought up GOP presidential candidate Ben Carson's recent attacks on Muslims, which not only haven't hurt him in the polls but have boosted his campaign donations.

"They talk about, like, God, family and country -- but it's God until it's about poor people, it's family until family is, like, same-sex and inclusive, and it's country until it involves black people," Mckesson said.

Wilmore asked Mckesson how he felt when white people co-opted the Black Lives Matter message by insisting that all lives matter.

"If all lives mattered, we wouldn't be in the streets, right?" Mckesson said. "If black people didn't have to fight for their rights like this, we wouldn't be here, so we know that it is, like, an ahistorical way of thinking about justice in this country. All lives have never mattered, which is why people like Mike Brown and Freddie Gray are not here."