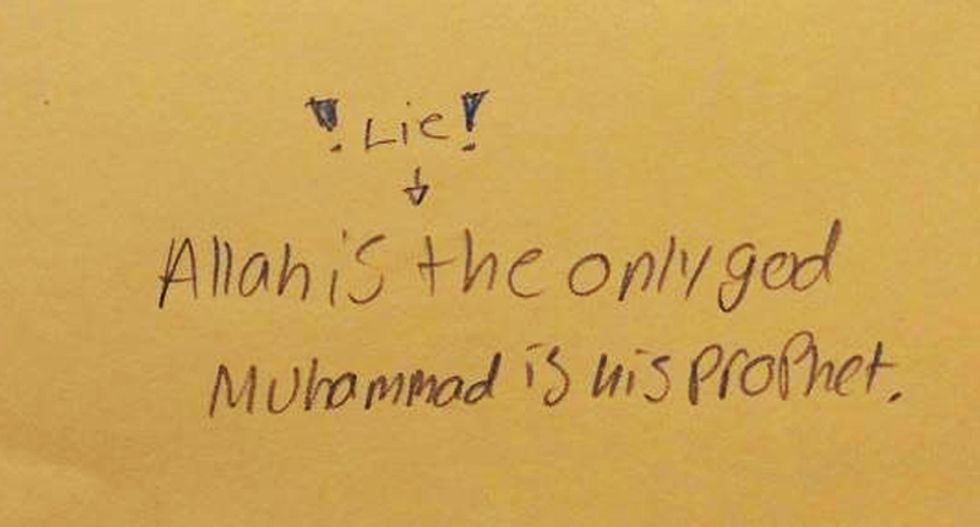 A concerned mom has riled up parents of students attending a Tennessee middle school, saying the local school is forcing their children to make a "profession of Islamic faith" while studying Islam in a seventh grade social studies class, reports the Spring Hill News.

On a Sept. 1 Facebook post, Brandee Porterfield stated that her 7th grade daughter's social studies class "has been studying Islam, including its religious doctrines, for 3 weeks. They skipped the whole chapter on Christianity because 'it is not in the state standards.'"

To prove her point, Porterfield included pictures of her daughter's homework, with a portion reading: "Allah is the only god. Muhammad is his prophet." Above the writing someone noted "Lie" bracketed by two exclamation points, with an arrow pointing at the quote.

According to Porterfield the students are "learning and writing the shahada, which is the Muslim creed or profession of faith," and that her children will not be taking part "no matter the consequences."

Jan Hanvey, the Maury County Public Schools middle school supervisor, explained that the students were learning about the Five Pillars of Islam during a one-day segment of the seventh-grade curriculum - not three weeks as Porterfiled stated - and it was intended to give students the basics of the religion.

“It’s part of history,” Hanvey stated while making subtle dig at the Facebook post that stirred up local parents. "Children need to know the ‘why,’ and they need to be able to learn and know where to find the facts, instead of going by what they hear or what they see on the Internet.”

In a written statement, Maury County Director of Schools Chris Marczak wrote: "For this last section on the Islamic World this past week, our educators had students complete an assignment that had an emphasis on Islamic Faith. The assignment covered some sensitive topics that are of importance to Islamic religion and caused some confusion around whether we are asking students to believe in or simply understand the religion. It is our job as a public school system to educate our students on world history in order to be ready to compete in a global society, not to endorse one religion over another or indoctrinate."