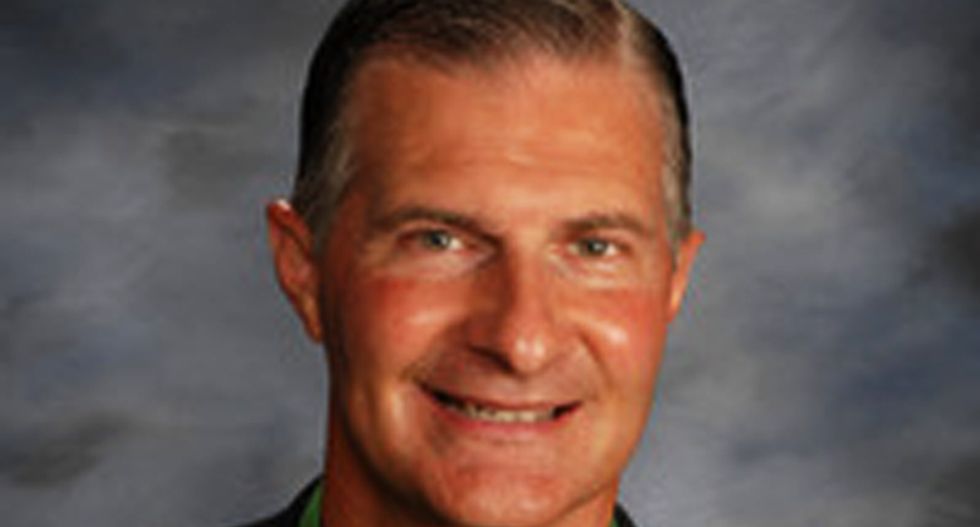 A high school principal in Texas --already under fire for conducting daily Bible readings with his students -- has been accused of harassing a whistle-blower teacher for going to the cops about a fellow teacher sexually assaulting a student, reports the Dallas Morning News.

According to former teacher MariBeth Thomas, Prosper High principal Greg Wright called her on the carpet for turning to the police after a student confided in her that a teacher had been touching her and making sexual advances.

In a lawsuit filed against the school district, Thomas claims Wright was upset with her for going to the police, saying he viewed news of the molestation as a public relations issue.

“I’m all about the team. I’m all about PR and how this high school looks, and we’re going to take care of this young lady, and we’re going to do it in a confidential manner to protect her, to protect all parties that are involved,” Wright said during a March meeting in his office that was recorded. “That’s why we have an internal police department to take care of these serious situations.”

“You don’t ever go outside the parameters of Prosper ISD police,” Wright told Thomas, adding that, if allegations got out, then the media would be alerted.

According to the teen who went to Thomas, the unidentified teacher touched her thighs while insisting that he "liked" her when she was alone with him during a tutoring session.The high school junior reportedly said she immediately got up and left the room.

Thomas states that after being reprimanded by Wright, she received her first bad evaluation and was excluded from meetings. According to her attorney,  she also received harassing texts from colleagues.

According to Prosper ISD  assistant superintendent, Michael Goddard, principal Wright did nothing wrong, stating that district internal security should have been given the opportunity to investigate before bringing in outside authorities.

“Was it an uncomfortable meeting? Absolutely. Was she reprimanded? No,” Goddard said. “I think there could have been softer ways to handle it, sure. But the message of making sure we have the correct information before moving forward was important.”

Goddard did not address whether the teacher is still at the school.

Principal Wright already has his hands full after receiving a letter from the Freedom from Religion Foundation accusing him of reading from the Bible to students at the their morning "See You At The Pole" prayer sessions. According to the Friendly Atheist, Wright is reportedly planning a Christian "First Priority" club that, according to a parent writing on Facebook, "will meet twice per month in the auditorium. They will sing, pray and praise."

Added the parent: "He’s encouraging students to be proactive and make their daily walk with Christ a priority."