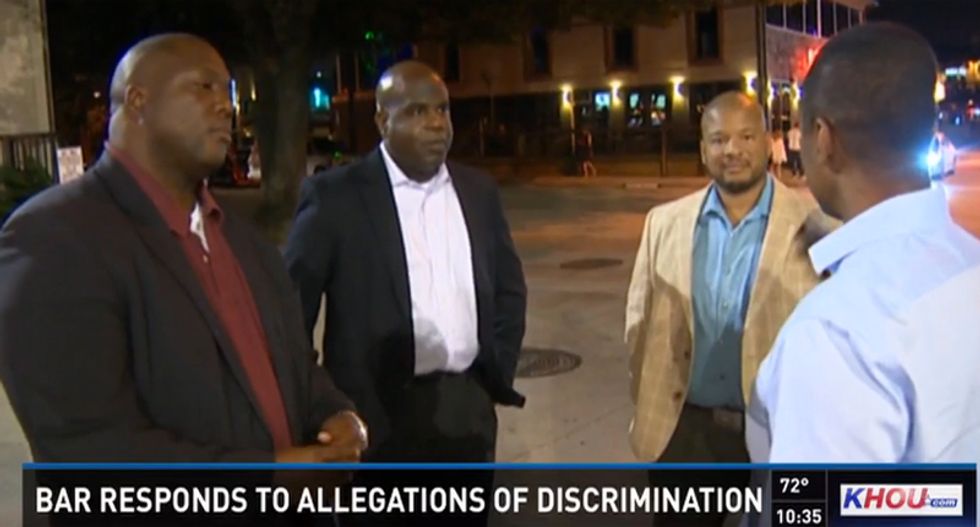 A popular bar in Houston is under fire after three black men attempted to enter and were told they needed to pay a $20 cover charge as they saw white people getting in for free, KHOU reported.

Brandon Ball, a private attorney in Houston posted on his personal Facebook page that he and two friends attempted to go into the Gaslamp bar last Friday night, only to be told there was a $20 cover.

The three decided to go to a nearby bar rather than pay the cover charge, but as they were leaving they noticed white people were being allowed into the Gaslamp without paying while other potential black patrons were being asked for the $20 cover.

"Ken, Dan, and I went back and watched from across the street as the guys who were working the front door of The Gaslamp (pictured) allowed white people to come in one after the other. Every black person who we watched try to go in was told there was a $20 cover or that their attire was not proper. One black guy was told that he could not get in because he had on Polo Boots," Ball wrote. "Dan spoke to several people who were told there was a $20 cover and they pretty much all said the same thing. It was not just blacks they were charging. It was people of both Asian and Latin descent."

After taking pictures of the two doormen, Ball said that one of them -- identified as Mike Ross -- threatened him saying he hoped he didn't run into him on the streets "because it would be a problem."

After posting his story on Facebook, Ball received a note from Ross asking him to quit sharing his name, saying his step dad is black and that he is "the furthest thing from racist or prejudice (sic)."

"This is 2015 and we're supposed to be living in post racial America but this is what's going on," said Ken Piggee, who accompanied Ball along with Dan Scarborough.

After Ball's post went viral, an attorney for the bar said the men were attempting to access a VIP section where the cover is required. The men dispute that saying they just wanted to go inside the main bar for a drink.

In his Facebook post, Ball pointed out why he found it necessary to bring up the slight.

"Why does this matter to me? Why is this important? If I have to answer that please just move along. This post is not meant for you," he wrote. "This event occurred in the late night of Sept. 11th. A day in which we as a country are supposed to come together. But events like this just tells us how far apart we are."

He added in an interview, "The Gaslamp is an example of the things that need to change all over America, not just here.Hopefully the post puts a little dent in that."

Watch video, courtesy of KHOU, below.