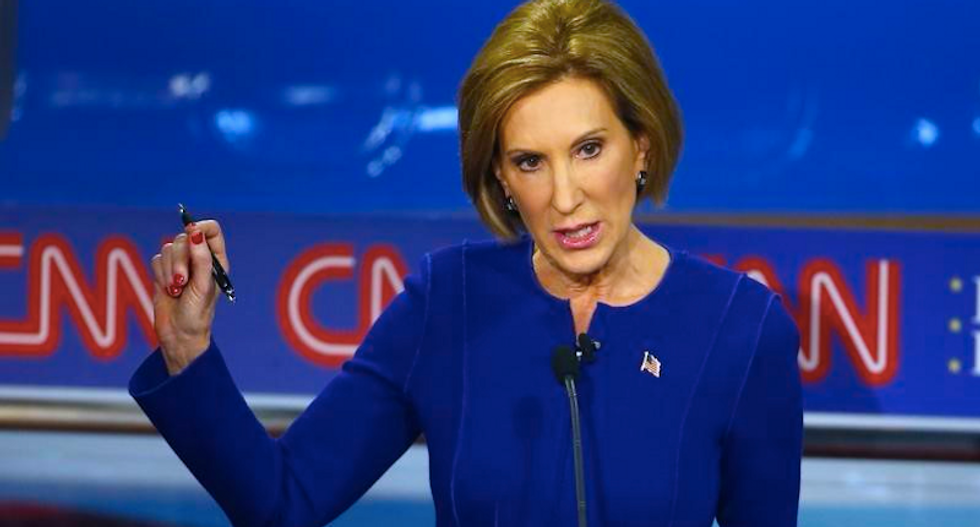 Republican front-runner Donald Trump came under heavy attack from his rivals in a contentious U.S. presidential debate on Wednesday, and former Hewlett-Packard chief executive Carly Fiorina emerged from the back of the pack to lead the charge.

Fiorina, a late addition to the second prime-time debate of the 2016 Republican White House race, made her presence felt as one of Trump's strongest challengers in a crowded field anxious to pile on the real-estate mogul and former reality-TV star.

With Trump shooting to a big lead in opinion polls, the other 10 candidates struggled at times to get attention on the crowded stage barely four months before the first nominating contest for the November 2016 election.

Unlike last month's first debate, when most of the contenders shied away from directly challenging Trump, several of them engaged him in sometimes fierce personal exchanges.

But Trump drew a sharp rebuke from Fiorina for his recent comment in an interview that voters might not back her because of her face.

Twitter later reported that Fiorina's response to Trump on her looks was the most tweeted moment of the debate. Facebook also registered the exchange as its top social moment, and said Trump and Fiorina were the top candidates discussed on Facebook during the debate.

Fiorina has been rising in the polls and was sharing the stage with the leading candidates for the first time after a strong performance in the first "undercard" debate for low-polling candidates last month.

At one point, she noted Trump's companies had filed for bankruptcy four times and asked, "Why should we trust you?"

Bush, a frequent target of Trump's jibes for his "low-energy" campaign, criticized the billionaire for his past friendliness with Democrats and for trying to get involved in casino gambling in Florida.

"He asked Florida to have casino gambling and we said no," Bush said. Trump shrugged his shoulders dismissively and denied trying to get into the casino industry in Florida. "Wrong ... Jeb, come on." Trump added: "More energy tonight? I like that."

Bush, an establishment Republican, has been overshadowed by Trump's bomb-throwing rhetoric but had promised to be more aggressive in the debate.

When Trump noted he was the only person on the stage who had disagreed with the decision to go to war in Iraq, Bush leaped to the defense of his brother, who ordered the invasion.

"He kept us safe," Bush said. Trump responded: "Do you feel safer now? I don't feel so safe."

Trump also took aim at Paul, saying he did not even belong on the stage because of his low standing in the polls. Paul, a senator from Kentucky, criticized Trump for his "sophomoric" criticisms of people's appearance.

"I never attacked him on his looks, and believe me there's plenty of material there," Trump said.

A Reuters breakdown of speaking times in the debate showed Trump led the way with more than 19 minutes, Bush was second with nearly 16 minutes and Fiorina was third with 13 minutes and 43 seconds. Wisconsin Governor Scott Walker was the least talkative candidate, speaking for only 8 minutes and 30 seconds.

At one point, New Jersey Governor Chris Christie, renowned for his sometimes brusque and bullying style, derided the "childish back-and-forth" and called on the candidates to be more substantive.

Reuters/Ipsos opinion polling before the debate showed Trump leading the 2016 race among Republicans with 32 percent. Retired neurosurgeon Ben Carson was second at 15 percent. Bush was in third place at 9 percent as his campaign struggled to take off.

The Republicans disagreed on whether the government should be shut down in order to cut funds for the women's health group Planned Parenthood and condemned President Barack Obama's nuclear deal with Iran.

Cruz, a U.S. senator from Texas, said the nuclear deal with Iran should be ripped up, but Paul said it should be enforced because Congress had not been able to stop it.

On Planned Parenthood, Kasich said it would not be worthwhile to risk a government shutdown as some Republicans in Congress have proposed in order to strip federal funding for the women's health group.

"I would not be for shutting the government down, because I don't think it's going to work out," Kasich said.

Cruz, who led the effort to shut down the government over funding for Obamacare, said, "We need to stop surrendering and start standing for our principles."

Before the prime-time encounter, Rick Santorum, Bobby Jindal, Lindsey Graham and Pataki participated in the "undercard" debate for those candidates who did not poll strongly enough to qualify for the main event.

Trump and Bush shared a moment of comity near the end of the debate when each of the candidates was asked what code name he or she would suggest the Secret Service use for them if they were elected president.

"Eveready," Bush said, using the name of an American battery maker. Looking at Trump standing next to him, Bush added: "It's high-energy, Donald." As the audience laughed and applauded, Bush and Trump, both smiling, slapped hands together.

Asked what his code name should be, Trump said "Humble" to further laughter from the audience.