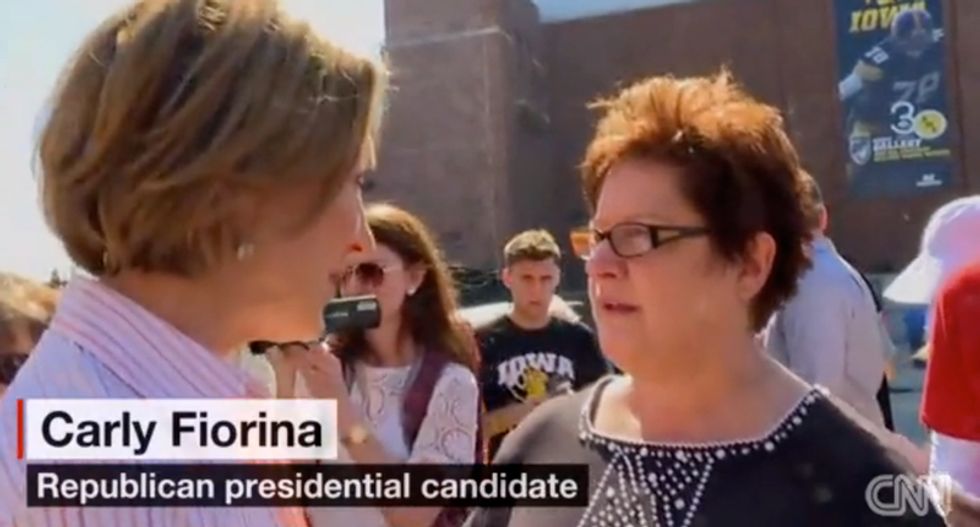 Carly Fiorina is confronted by a Planned Parenthood supporter (CNN)

The Republican presidential candidate Carly Fiorina met with protests as she attended a University of Iowa football game tailgate rally on Saturday.

Those who chanted and held up placards were supporters of Planned Parenthood, the organization at the center of a controversy over videos, which purport to show offering fetal body parts for sale.

The protest, in Iowa City, was the culmination of a weeklong back and forth between the women’s health organization and the only woman seeking the Republican nomination for president, over remarks made by Fiorina about the content of the videos.

“I-O-W-A, women’s rights are here to stay!” shouted one woman – who was dressed as a packet of birth control pills – outside Kinnick Stadium. “Women are watching and we vote!”

The Fiorina campaign said it was “happy [protesters] are bringing more attention to the videos”.

Last week, Fiorina emerged from the second Republican debate as a strong contender in the now 15-strong field. The event in Simi Valley, California, was the former Hewlett-Packard chief executive’s first chance to share a stage with other leading candidates including Donald Trump, Jeb Bush and Marco Rubio. She took the opportunity to defend herself and to slam Trump over his perceived sexism , and emerged triumphant.

“Anyone who has watched this video tape, I dare Hillary Clinton, Barack Obama, to watch these tapes,” she said. “Watch a fully formed fetus on the table, its heart beating, its legs kicking, while someone says we have to keep it alive to harvest its brain.”

Fact-checkers and news reports subsequently pointed out that Fiorina’s remark was not accurate, but the candidate has refused to retract the remark or apologize to Planned Parenthood.

At the Heritage Action policy summit in South Carolina, she said: “Honestly, I went on national television the morning after the debate, and [ABC anchor] George Stephanopoulos told me I was mistaken, that the tape doesn’t exist, that the images aren’t real.

Three days after the debate, the CARLY for America Super Pac released a video that paired Fiorina’s debate answer with a graphic video of a fetus. Dawn Laguens, executive director of the Planned Parenthood Action Fund, wrote a letter to Fiorina insisting that the video did not “show what you have claimed”.

“This fraudulent video is beneath a serious candidate for the presidency, and you should take it down immediately,” she wrote.

Since campaigns and Super Pacs are not allowed to coordinate, the Fiorina campaign has declined to interfere.

On Thursday, Fiorina visited a Christian pregnancy center in South Carolina. With an ultrasound in the background, she told Lacey Thomas, an expecting mother, “it’s good when people know what 17 weeks look like.”

Later, Fiorina told reporters: “liberals and progressives will spend inordinate amounts of time and money protecting fish, frogs and flies.” Such people, she said, “do not think a 17-week-old, a 20-week-old, a 24-week-old is worth saving”.

“This, ladies and gentlemen, is hypocrisy, and it goes to the core of the character of our nation,” she said, according to the New York Times .

The controversy has resonated strongly with both Fiorina’s supporters and her opponents.

On Saturday in Iowa about a dozen Planned Parenthood supporters, wearing pink shirts, mingled with Fiorina supporters who were decked out in red. At one point, an elderly man making his way through the crowd was caught on camera pushing a female Fiorina supporter. Security officials, wearing purple shirts, attempted to keep the peace.

Planned Parenthood sent a “cheerleading squad”, comprising patients and advocates, to greet her in Iowa.

“ Let them protest ,” Fiorina said, according to a CNN reporter Betsy Klein.

In a statement, Planned Parenthood attacked “patently false statements regarding an already heavily manipulated video” and added that “her lie is dangerous for women’s access to preventative healthcare.”

In an email to the Guardian, deputy campaign manager Sarah Isgur Flores said the Fiorina camp welcomed the demonstration.

“We’re happy they are bringing more attention to the videos,” the statement said, “which show planned parenthood butchering babies and selling their organs.”

Watch an ABC News report on this event below: