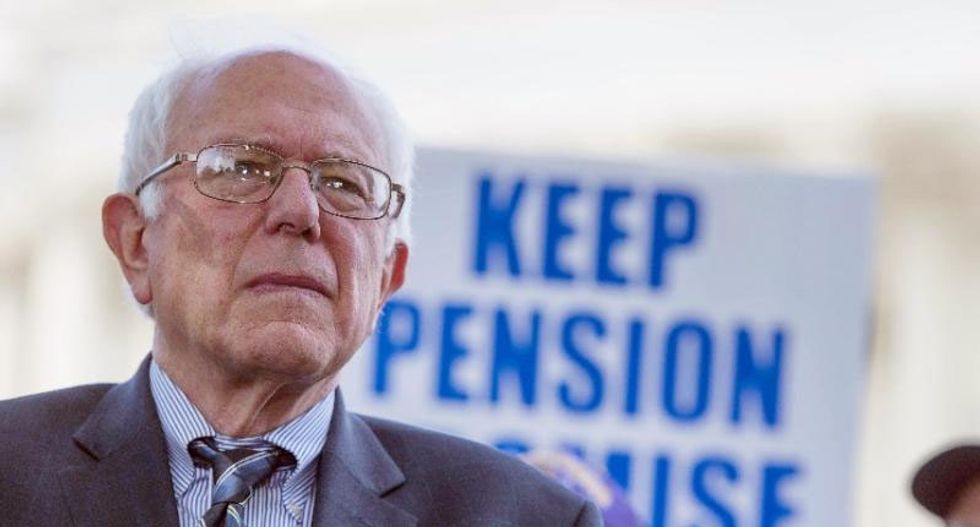 Bernie Sanders has taken a slim lead over Democratic presidential frontrunner Hillary Clinton in Iowa, while Donald Trump extended his domination over the rest of the Republican field, polls show (AFP Photo/Jim Watson)

Bernie Sanders is as much an insurgent as Jesse Jackson was, according to Cornel West, who worked for both Jackson campaigns and is now the socialist Democratic presidential candidate’s most high-profile black backer.

“Absolutely, no doubt about it,” the academic and campaigner told the Guardian. “There are some similarities and elective affinities.”

Jackson ran unsuccessfully for the Democratic nomination in 1984 and 1988, winning 6.6m votes and 11 states in his second campaign, and his run was “historic”, West said.

But “the Sanders campaign is even more progressive than Jackson’s were, because his critique of Wall Street is more direct,” West said in an interview last week.

What Jackson had – and Sanders does not – was strong black support. But, said West, “that’s what we are going to get – once black people find out who Brother Sanders is”.

West said he thought African Americans would rally behind the white guy from the Ben and Jerry’s state who is not “a household name” when they discovered he was for economic reforms such as free tuition at public universities, single payer healthcare and “closing tax loopholes for oligarchs”, he said.

“In my mind, the leaders of the Black Lives Matter movement will recognize that Brother Bernie is much stronger on people, on economic justice, and on racism than any other candidates,” West said.

Related: Bernie Sanders's ability to rally black supporters may be critical to his success

Sanders met in Washington last week with racial justice activists who called for him to get more specific with his proposals for community and criminal justice reform, even as the senator introduced new legislation to phase out private prisons. But the leaders of Black Lives Matter will not endorse a presidential candidate in 2016, one of its founders said over the weekend.

Black Americans “take great pride in [Obama]”, West acknowledged. “Most black people have recognized that Barack Obama was a great symbolic victory. I do, too,” he said – sounding much less harsh than he did when he accused the president of being a “counterfeit” to people “looking for John Coltrane” only to get “Kenny G in brown skin”.

But he said he thought that they would also “recognize that [Obama] didn’t fight institutional racism for six and a half years”. And West pointed out there was a higher rate of black child poverty now than when Obama came into office, and that black unemployment remained twice that of whites – which was why he thought Sanders’ ambitious economic arguments might appeal to black voters.

Not everyone in the black community has been swayed: representatives Charles Rangel and Sheila Jackson Lee were among only six of the 46 members of the Congressional Black Caucus who recently chose to meet with Sanders, and a lot of them have historically supported Clinton, whoappeared at the group’s annual awards gala with Obama on Saturday.

But movements such as Black Lives Matter and the affiliated Campaign Zero are pushing black voters, as The New Jim Crow author Michelle Alexander noted on Facebook , to understand that they are not beholden to anyone, that “we have a choice [about who they support]. We are not checkmated.”

Sanders’s campaign is more often compared to Obama’s in 2008 – when the Illinois senator surprised Clinton and the political establishment by pulling off an unexpected victory – than to Jackson’s. But Obama’s campaigns, unlike those of Jackson, always tried to remain more “post-racial” than racial, more above the fray of politics than in the weeds of naked liberal wonkery.

Before this summer, Sanders was open to the charge that critiquing racism was absent from his critiques of capitalism. But then Black Lives Matter activists interrupted him in August, and he responded by listening to their point of view. He has recently added the words “end institutional racism” to his stump speech on the trail.

Sanders may not win the long fight. But he has overtaken Clinton in Iowa and New Hampshire and is eating into her lead nationwide.

West acknowledges there are areas of difference between him and Sanders – for example, on Israel.

West – who said he believed “we’ve got to respond to the Israeli occupation of Palestine that way we’d respond to the Palestinian occupation of the Jews” – endorses the movement to boycott Israel . Like most Democratic politicians, Sanders supports Israel and a two-state solution, although he skipped Benjamin Netanyahu’s address to Congress and supported the Iran sanctions deal .

But West said he and Sanders “fundamentally agree that a precious Israeli baby is as valued as a precious Palestinian baby” as a “moral and spiritual issue”.

Taking Donald Trump seriously as “the anti-establishment candidate”, West said he thought the US was “going to wind up with Sanders versus Trump. And he’s going to crush Donald Trump”.

Sanders himself might not have all the rhetorical flair Jackson had when he stood, black and defiant in the era of Ronald Reagan and Margaret Thatcher. But judging from Sanders’ selection of West as his surrogate black id, and considering the way he has met with the Black Lives Matter movement without being defensive, there may be more similarities and affinities between Brother Bernie and Brother Jesse than meet the eye.