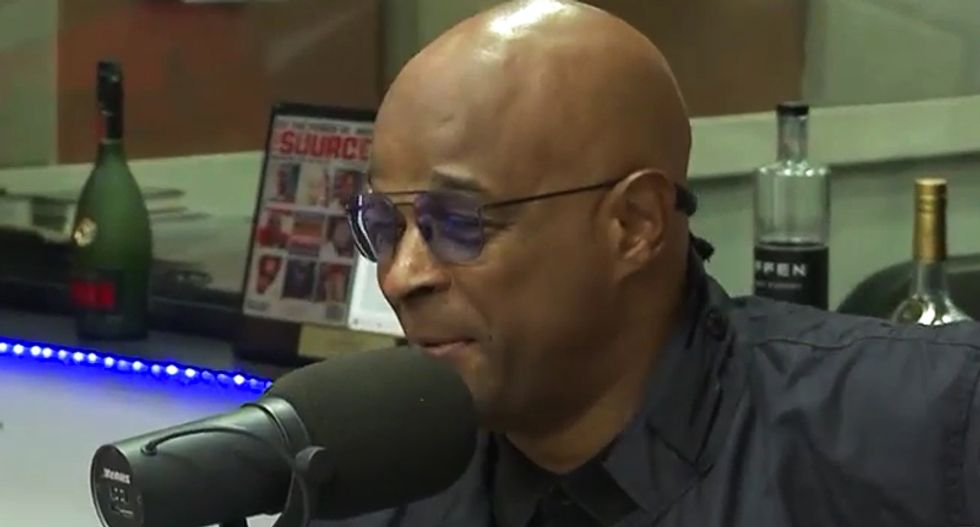 Damon Wayans uttered the most disturbing defense of Bill Cosby yet after he appeared on Power 105.1's The Breakfast Club and claimed that Cosby couldn't have assaulted his accusers because they weren't attractive enough to be raped.

“How big is his penis that it gives you amnesia for 40 years? If you listen to them talk, they go, ‘Well, the first time…’ The first time? Bitch, how many times did it happen? Just listen to what they’re saying and some of them really is unrape-able. You just look at them and go, ‘You don’t want that. Get outta here.’”

The fact that Wayans thinks it's acceptable to call alleged rape victims "bitches" and also seemed to be clueless about the numerous women who came forward with the allegations decades ago, shows that he has no interest in the facts of the story. He made up his mind from the beginning that no amount of evidence would change his unwavering support for Cosby.

Even a 2005 deposition revealed that Cobsy confessed to purchasing Quaaludes with the intention of drugging young women he wanted to have sex with. But washed up clowns like Wayans still refuse to accept the reality of the dozens of women who came forward with detailed stories of their alleged rapes.

“What’s the joy of banging someone that’s asleep," he said at one point during the interview, not realizing that he can't comprehend anything outside of his own deluded perspective.

Wayan's statements didn't stop there. The vast majority of the women who came forward are not looking to file any civil suits, meaning that they're not looking to "cash in." In fact, speaking out has only led to speculative commentary from tone-deaf individuals like Wayans. But the former comedian still thinks the entire controversy is about a "money hustle," that Cosby should give a deposition on.

“If I was him, I would divorce my wife, give her all my money, and then I would go do a deposition. I would light one of them three-hour cigars. I’d have some wine and maybe a quaalude, and I would just go off, because I don’t believe that he was raping."

Wayans defending Cosby is one thing, but the language and reasoning he used to get his point across is truly disgusting. Running his mouth and calling these women unattractive money-hustlers is beyond ludicrous.

The most telling part about all of this is that he obviously feels empowered to use that type of rhetoric. It makes one wonder how he speaks about these matters behind closed doors, especially if he's willing to be unbelievably misogynistic in public. It's also laughable that he considers himself the arbiter of who is and isn't attractive enough to be sexually assaulted or raped.

Wayans demonstrates how little he knows about the difficulty powerless women have in coming forward with rape accusations against an incredibly powerful man that the entire country loved. Most of the 40 plus women who have come forward were allegedly assaulted when they were in their early 20s, and had absolutely no power at all. The first alleged rape occurred in the 1960s, when there was a much more nonchalant attitude toward rape allegations in the country. There wasn't a single moment where Wayans thought about the realities these women faced, or the difficulty they're probably facing now with backwards thinking idiots stating their ill-informed opinions on-air.