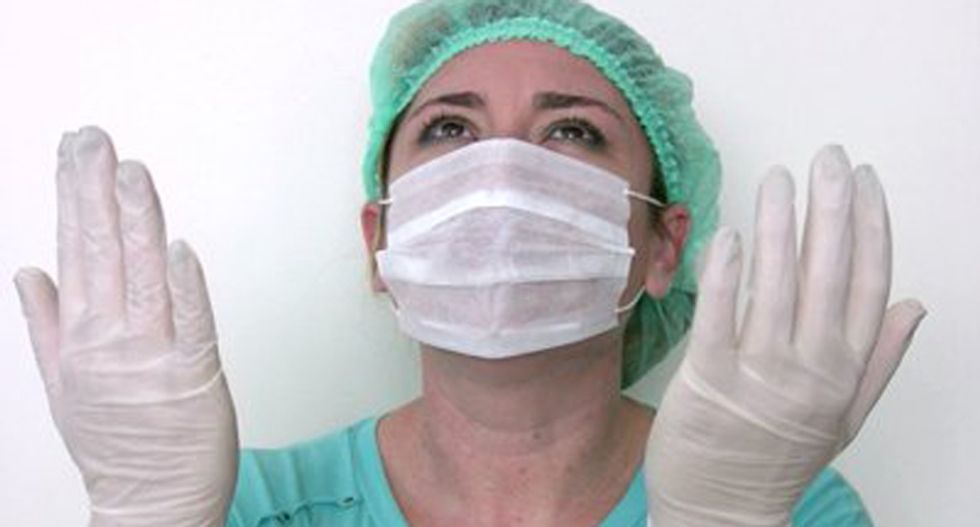 A doctor prays before surgery (Shutterstock)

Picture this: You wake up far too early one morning because your hand is intensely painful and you don’t know why. When the pain gets worse, you go to the ER. The attending doctor, a gray haired man, examines you, draws blood, and then tells you an unusual flesh eating infection in your finger is putting your health at risk. He recommends amputating the hand immediately before the infection causes more harm. What he doesn’t tell you is that at this early stage the simple injection of a state-of-the art antibiotic would solve the problem. Why the omission? His hospital is managed by a self-described religious healthcare ministry that forbids the use of antibiotics.

Across the U.S., religious healthcare corporations are absorbing  once secular and independent hospitals and in the process imposing  religious restrictions that sometimes pit standard medical practice against theology. To the best of my knowledge, no religious system that is licensed to serve the general public forbids the use of antibiotics. But facilities under the direct or indirect control of Catholic bishops are providing maternity care that is tantamount to unwarranted amputation.

Recently a woman was traveling across the Midwest when she developed abdominal pain. She and her husband went to the nearest hospital, where she was diagnosed with a potentially fatal ectopic pregnancy. The doctors recommended immediate surgery to remove the fallopian tube containing the misplaced embryo, a procedure that would reduce by half her future chances of conceiving a child. They failed to mention that a simple injection of Methotrexate could solve the problem, leaving her fertility intact. (In fact, at a secular hospital she found on her smart phone, it subsequently did.) Why the omission? The Catholic hospital where she got diagnosed was subject to the “Ethical and Religious Directives” of the Catholic bishops, which state, “In case of extrauterine pregnancy, no intervention is morally licit which constitutes a direct abortion.”

According to Catholic moralists, an injection that destroys an ectopic embryo is a direct abortion, while removing the part of a woman’s reproductive system containing the embryo is not. While this may sound strange (or abhorrent) to outsiders, it has its own internal logic, outlined by Father Tad Pacholczyk at the National Catholic Bioethics Center. Catholic ethics ultimately are determined by theologically based perceptions of what actions God approves and doesn’t approve. While compassion does matter, the end goal is to improve the spiritual standing or righteousness of the person performing the action. These theological dictates may or may not align with the questions that govern secular medical ethics and practice: how to minimize harm and suffering or maximize wellbeing while respecting patient autonomy.

In 2010, a pregnant Nicaraguan woman with metastatic cancer was denied treatment because chemotherapy could harm her fetus, which doctors refused to remove. Though many Protestants disagree, Catholic theology treats any product of conception as a fully formed human being, with rights equal to a woman from the moment of conception whether or not there is any possibility of it actually becoming a person. This means that abortion is an inherently bad action, regardless of outcomes. Nicaraguan law, rooted in this theology, prohibits all abortion even when a woman’s life is at stake. In 2012, a 16-year-old Dominican girl also was denied treatment for weeks while doctors debated whether chemotherapy would constitute an abortion. She eventually miscarried and later died.

Christianity traditionally has regarded women as vessels—vessels for evil and for babies. For Adam was formed first, then Eve. And Adam was not the one deceived; it was the woman who was deceived and became a sinner. But women will be saved through childbearing—if they continue in faith, love and holiness with propriety (1 Timothy 2: 13-15). As a consequence, Catholic rules addressing reproduction are particularly convoluted, and sometimes patients pay the price:

A Catholic doctor at a Catholic hospital went against my daughter’s wishes and signed consent to have a hysterectomy because of severe endometriosis. One ovary had already exploded. My daughter had never intended or desired children nor was she in a suitable situation to have a child. She was single, in her late 20s. When she awoke from surgery she learned that the doctor had over-ridden her wishes and consent in an attempt to save her fertility. The operation was botched, leaving my daughter on permanent disability, in pain, with even more health problems than she’d had before. – Comment at Truthout

Secular medical ethics evolved to promote patient welfare and autonomy. As better treatment options become available, providers are expected to keep their skills and knowledge up to date so that they can provide accurate information about the range of options and offer the services most likely to create the best health outcomes for patients. Violation of these norms is considered malpractice.

Medical malpractice can be defined as: “Improper, unskilled, or negligent treatment of a patient by a physician, dentist, nurse, pharmacist, or other healthcare professional.” Whether or not a healthcare provider has provided excellent or unacceptable care depends on the general state of healthcare at the time service is provided.

The critical element is standard of care, which is concerned with the type of medical care that a physician is expected to provide. Until the 1960s the standard of care was traditionally regarded as the customary or usual practice of members of the profession. This standard was referred to as the “locality rule,” because it recognized the custom within a particular geographic area. This rule was criticized for its potential to protect a low standard of care as long as the local medical community embraced it. The locality rule also was seen as a disincentive for the medical community to adopt better practices.

Most states have modified the locality rule to include both an evaluation of the customary practices of local physicians and an examination of national medical standards. Physicians are called to testify as expert witnesses by both sides in medical malpractice trials because the jury is not familiar with the intricacies of medicine. Standards established by medical specialty organizations, such as the American College of Obstetricians and Gynecologists, are often used by these expert witnesses to address the alleged negligent actions of a physician who practices in that specialty. Nonconformance to these standards is evidence of negligence, whereas conformance supports a finding of due care. –Legal Dictionary

The recent case of a young Salvadorian mother named Beatriz offered a graphic example of how religious interference in medical care can force doctor to commit malpractice. Beatriz, who suffers from lupus, was pregnant with a nonviable anencephalic fetus yet was refused an abortion clear through the second trimester, as her condition became increasingly risky. Salvadorian minister of health, Maria Isabel Rodriguez, called her situation a “grave maternal illness with a high probability of deterioration or maternal death.”

“I just want to live,” Beatriz told the press—echoing the sentiments of Savita Halappanavar who died last year after being denied an abortion in Catholic Ireland. Salvadorian doctors were willing to perform the needed abortion, but their hands were tied by laws based in Catholic theology. Finally, at 26 weeks gestation and under international pressure, a Salvadorian court ruled that Beatriz could end the pregnancy—via caesarean section. As in the case of the ectopic pregnancy, Beatriz was offered an invasive surgical procedure rather than the standard treatment which would minimize recovery time and leave her body intact. As best can be determined from news reports, the only reason the doctors had to cut her was to satisfy the Catholic pretense that this was an attempt to deliver a viable baby.

In the wake of Halappanavar’s death and Beatriz’s dangerously substandard care, Marge Berer, founder of the international journal, Reproductive Health Matters, questioned the ability of Catholic-controlled facilities to provide emergency obstetric services and asked whether they should be formally stripped of their right to provide maternity care more broadly. Unfortunately, with Catholic theology encoded as law in many countries and with Catholic healthcare ministries buying up independent care facilities here in the U.S., a woman may have few other options. If all currently proposed mergers are completed in Washington State, for example, nine counties will have all hospital beds tied to religious institutions by the end of 2013, including the University of Washington system.

When bishop directives trump science and patient preference, pregnant women are not the only ones at risk. According to a litany of articles at two watchdog sites, CatholicWatch.org and Mergerwatch.org, the problem of religious interference in health decisions extends far beyond obstetrics and family planning, spanning end of life care, treatment of queer families, and any drugs remotely derived from embryonic stem cell research. As medical science offers us more and more ability to manage sexuality, reproduction, body modification, and our dying process, religious dictates will be increasingly at odds with secular standards of care. Doctors working under these mandates will be forced to offer treatments that, by contrast with the best available, can be classed only as malpractice—a pattern that both patients and personal injury attorneys are bound eventually to notice.