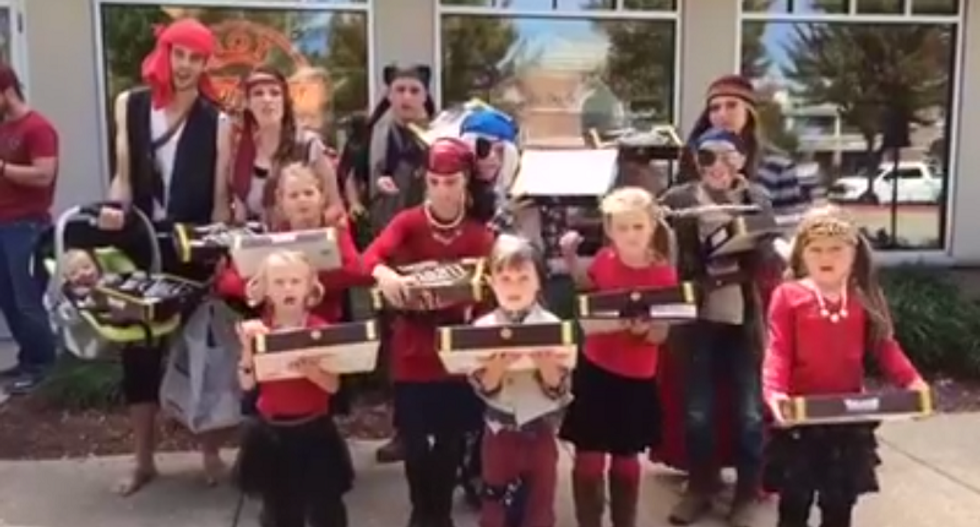 The Duggar family inspired ire this week for snagging no less than 168 doughnuts during a giveaway at Krispy Kreme, Inquisitr reports.

The family apparently went to the doughnut chain for their "Talk Like a Pirate Day" promotion, where anyone who said something like "Arr matey" got a free doughnut. Customers who went the extra step of dressing up got a dozen doughnuts. It's possible Krispy Kremes wasn't expecting 14 Duggars to show up in full pirate gear, but they all got a box of doughnuts that it seems unlikely they'll be able to eat.

A video posted to the Duggars' Facebook page shows the kids holding their boxes and exclaiming, "Free doughnuts!"

This caused some backlash on social media.

"Just because you 'can' get something for free, doesn't mean you should!" wrote Susan Panther. "Too bad that wasn't in the homeschool wisdom booklets. Do you realize that you not only cannot possibly eat that many donuts, but it is greedy to take more than you need?! And perhaps you are taking food out of mouths that truly could use it? I'm beyond disgusted by your selfish, pirating, plundering, pandering ways."

Sally Reader wrote, "Seems excessive to take that many 'free' donuts from a business that was doing a promotion. Those donuts weren't 'free' to make. Even if you give them away, you are still taking advantage of that business. That is just not right."

Some people came to the defense of the family, though most of the comments were negative.

"Actually this family volunteers a lot in our community so I am sure they were donated to maybe our women and children shelter or other just homeless people," Kayla Lambert wrote.

A lot of fun and family time! 14 dozen donuts for free to share!