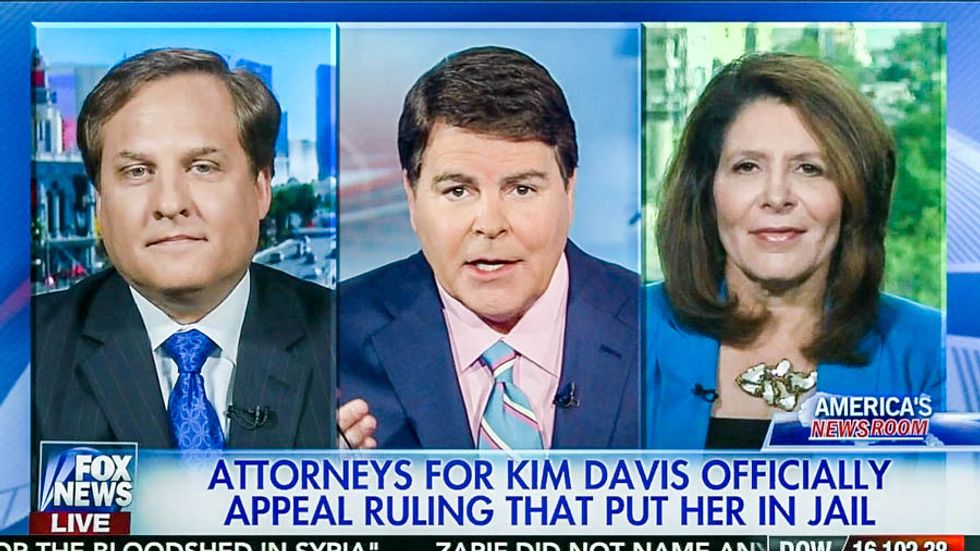 A panel of legal experts on Fox News came to the conclusion on Monday that Kim Davis' attorney, Mat Staver, was "ridiculously stupid" for asserting that the Supreme Court did not have constitutional authority to strike down same-sex marriage bans.

On Monday's edition of Happening Now, trial attorney Chip Merlin pointed out that anyone who violates a judge's order should "expect to be thrown in jail."

"She can still practice her faith," Fox News host Gregg Jarrett noted. "Just not on the job in a way that interferes with the legal rights of the citizens she serves. And in fact, the U.S. Supreme Court said so nine years ago."

"She's a hypocrite," criminal defense attorney Sharon Liko agreed. "She's applying for the job of a martyr. She wants to practice her faith by not issuing marriage licenses. Yet, she will not agree to let the deputy county clerks issue marriage licenses even if it's okay with their faith."

"When she took the job she swore to uphold the law," Jarrett explained. "We rely on government officials to do that. They can't just pick and choose what laws they like, which ones they don't. If they were allowed to do that, wouldn't that lead to chaos, anarchy and so forth?"

Jarrett also called out Davis's attorney, who said it was "questionable" if the Supreme Court had the "constitutional authority" to rule on same-sex marriage.

Jarrett added that Staver's statement appeared to be "stunningly obtuse."

"That's a very polite way of putting it," Liko replied. "I would say it's just a ridiculously stupid statement. The Supreme Court does just that, and they determine constitutionality issues, they resolve these kinds of disputes."

"This woman has a choice, she can either follow the law -- she can do her job -- or she can get out."