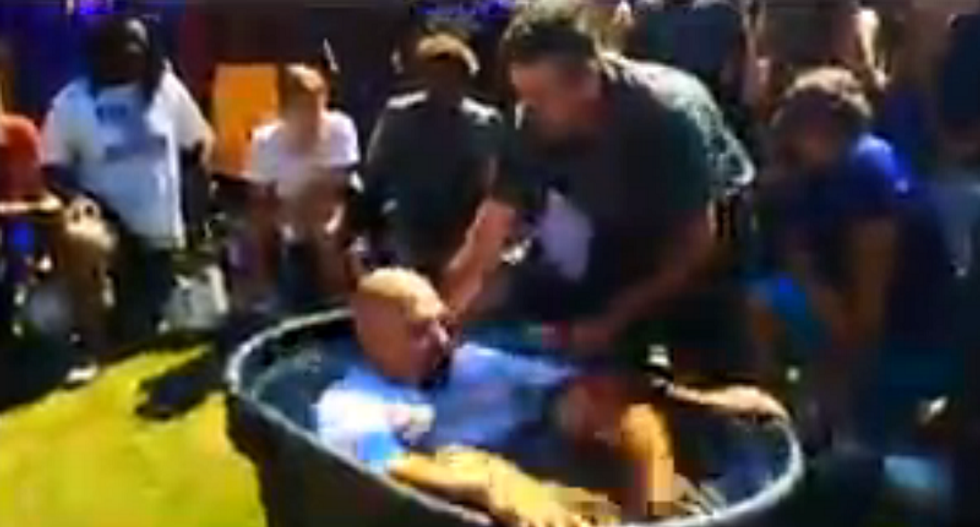 The coach and players at Villa Rica High School were reportedly baptized on the field (Screenshot/11Alive.)

A Georgia public high school football team is the subject of a school district investigation after video of what appears to be a mass baptism of its players was posted online.

The video posted by First Baptist Church of Villa Rica shows members of the team and coach climbing into a large bucket on the football field and having their heads dunked as organ music is played. The caption on the YouTube video says the players go to Villa Rica High School, according to local station 11Alive.

"We had the privilege of baptizing a bunch of football players and a coach on the field of Villa Rica High School! We did this right before practice! Take a look and see how God is STILL in our schools!" the video caption reads. The video was removed from YouTube as of Tuesday night.

The school district is now investigating the incident.

"The Carroll County School System was made aware of a situation that took place at Villa Rica High School prior to football practice on August 17th. The District is currently looking into the specifics of this situation and will take appropriate steps to ensure all state and federal laws are followed," a statement read.

In response, the Freedom From Religion Foundation sent a letter to the school district stating they prefer to settle matters cooperatively, but reminding them of a similar situation at another Georgia school district. FFRF sued the Emanuel County School System in February, seeking punitive and personal liability damages after elementary school children were subjected to daily Christian prayers.

Annie Laurie Gaylor, co-president of FFRF, said having a team baptism that includes the coach is extremely troublesome because of the pressure it places on high school students to participate, despite their personal beliefs.

"I can’t remember another case like this," she told 11Alive. "It's really misusing the authority of the coach to promote his personal religious agenda... It’s forcing them to undergo a religious ritual to be accepted on a team. How are they going to cross their coach? They have no choice. It's proselytizing, it's coercive, and it's not legal in our schools."

First Baptist Church of Villa Rica did not respond to requests for comment by the news station.

Watch the report, via USA Today, which includes footage of the baptism, here: