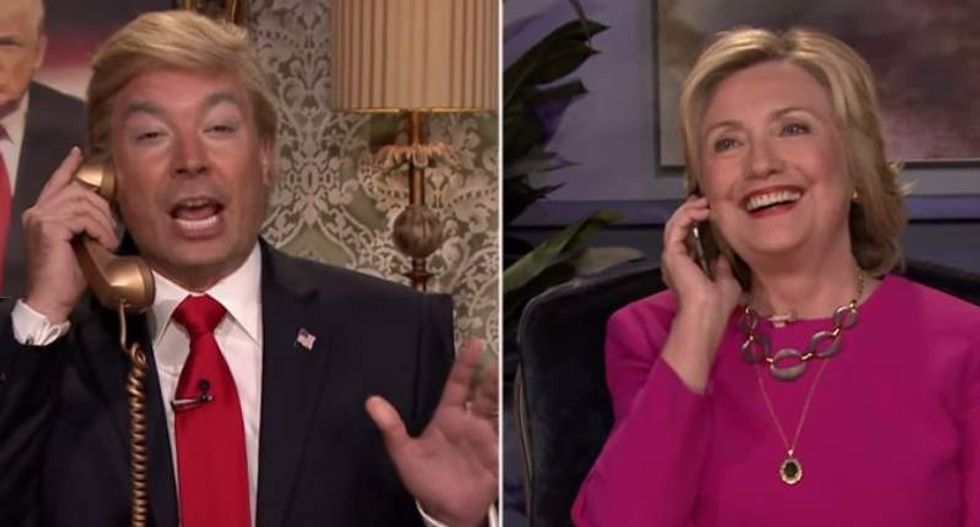 Jimmy Fallon followed up on Wednesday night's GOP debate by bringing back his Donald Trump impersonation for a phone conversation with former Secretary of State Hillary Clinton on The Tonight Show.

"You sound like a robot," "Trump" chided. "Bleep blorp bleep blorp. Does not compute. You want to win, here's what you gotta do: First, yell. I yell all the time."

He then revealed that his phone was not even plugged, boasting, "I'm just yelling and you're hearing it."

Fallon-as-Trump then suggested to Clinton that she pick three things everyone loves and say she hates them, offering up puppies, fall foliage -- "tree puberty" -- and rainbows as examples, before asking if she was taking notes.

"Let me grab my pen," Clinton said, when in fact she reached for a glass of wine. Later, a question about immigration turned into a bigger exchange regarding politics.

"Do you have any idea what it's like to work so hard for something, to be so close to getting it, then someone pops out of nowhere and tries to take it all away?" Clinton asked "Trump."

"Are you talking about Bernie Sanders?" he replied. "I hate to say this, but I think he's losing his hair."

"At least he doesn't have this one strand that he twirls over his head like a soft-serve at Dairy Queen," she countered.

Watch the conversation, as aired on Wednesday, below.