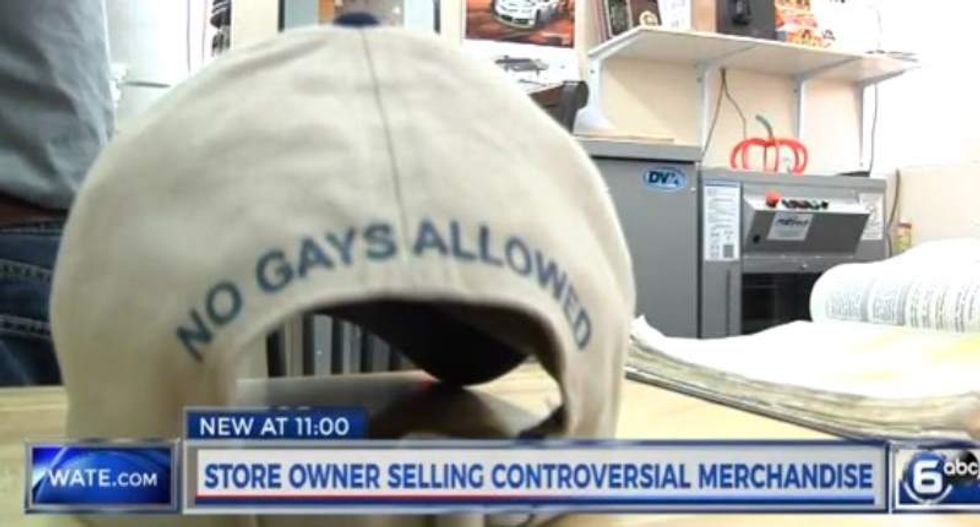 An anti-gay hardware store owner in Washburn, Tennessee said 300 people have signed a petition supporting not only his ban on gay customers, but merchandise related to it, WATE-TV reported.

"I'm just doing it because people have asked me for it," Jeff Amyx said of the hats and bumper stickers bearing the message, "no gays allowed." Amyx has allegedly sold out of each, and is planning to sell t-shirts with the same phrase printed on them. He is also selling merchandise bearing the phrase, "Choose God or gays," saying he makes no profit from the items and only makes enough to cover production costs.

Amyx, a Baptist pastor, implemented the ban following the Supreme Court decision striking down bans on same-sex marriages, saying Christians were the victims of a double standard preventing them from expressing their beliefs.

Another sign in the store follows up on that belief, stating, "We reserve the right to refuse service to anyone who would violate our freedom of speech and freedom of religion."

He also claimed that the signs and merchandise have been accepted in the rural committee, displaying a whiteboard with signatures from more than 300 people. However, the Tennessee Equality Project, an LGBT advocacy group, called Amyx's actions hurtful.

"The fact that he is selling merchandise that is saying 'choose God or Gays,' it doesn't really help those who are Christian and identify as LGBT as myself," chairperson Gwen Schablik said.

Watch WATE's report, as aired on Wednesday, below.