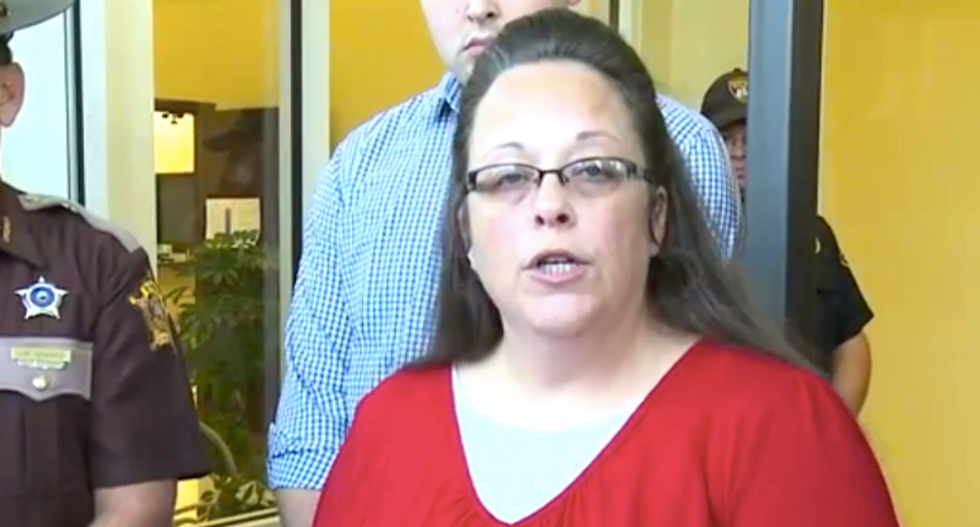 A deputy clerk in Kentucky is concerned that embattled Rowan County clerk Kim Davis has altered marriage license paperwork, according to a notice filed on Friday.

Richard Hughes, who represents deputy clerk Brian Mason, filed a notice in a Kentucky district court saying that Davis may have altered forms used in the marriage licensing process, raising questions over the validity of licenses issued in the county.

Davis was held in jail for five days after repeatedly refusing to issue marriage licenses because she opposes same-sex marriage, which became legal nationwide in June. She was released from jail last week under the condition that she would not interfere with how licenses are issued.

Mason told his attorney that Davis confiscated the original forms this week and handed out an altered form that did not include her name and does not mention the county. The new form has Mason’s name and a place for him to write his initials but not his signature.

Hughes said he was alerting the court because his client does not want to issue invalid licenses. Mason has been filing the appropriate paperwork, according to the notice.

State law requires marriage licenses to be issued under the authority of the county clerk. Someone else, a minister or other officiant, then performs the ceremony and signs the license. The clerk then files the license with county records.

Davis has said that any license issued – with or without her name – is not valid unless she authorizes it. However, when she was released from jail she changed the marriage license forms to say they were being issued under the authority of the federal court. Davis’s attorney said this new form, if OK with the judge, would solve the problem because gay couples would have a marriage license and Davis would have a clear conscience.

But lawyers with the American Civil Liberties Union, which represents the gay couples that sued Davis, said they are concerned the new forms might not meet the requirements of Kentucky state law. Hughes echoed those concerns in Friday’s court filing.

“Mr Mason’s concern is he does not want to be the party that is issuing invalid marriage licenses and he is trying to follow the court’s mandate as well as his superior ordering him to issue only these changed forms,” Hughes said.

The Associated Press contributed to this report