Marco Rubio has an astoundingly low opinion of women's intelligence 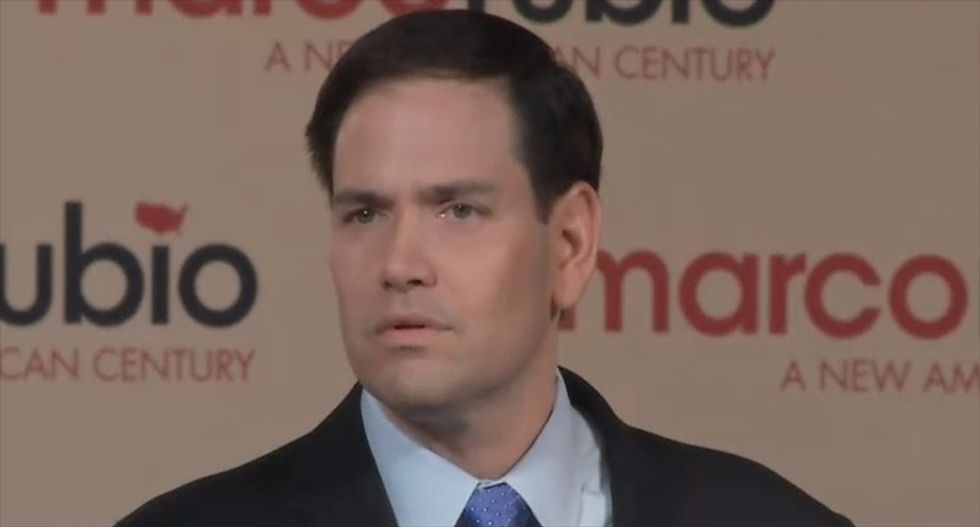 And at other times, sticking to the official talking point that women who get abortions are just too stupid to know how to make decisions:

If you go to one of these centers, young women are provided very few options. In many places, they’re not told anything about, for example, adoption services that might be available to them. … In essence, you come in and it’s already predetermined. … This is what this place does. It provides abortions, and we are going to channel you in that direction.

You know, for the money. *evil laugh* Nothing like a get-rich-quick scheme where you "sell" something at less than the cost it takes to store and ship it. Anyway, I write at RH Reality Check about the conspiracy theory madness that's going on here, so you should read that.

The one thing that didn't fit into my piece but I want to flag is this adoption gambit. Antis like it because it sounds kind of reasonable, but it's really not. It's not just because Planned Parenthood does, in fact, offer information about adoption. It's because this gambit assumes, without a shred of evidence, that women who get abortions would largely, even predominantly, choose adoption if someone just told them that was an option. In other words, it assumes women are stupid.

I wrote a little play to illustrate the world as Rubio's comments suggest he sees it. You may begin to see why this is not a good read on how thing really work.

Young woman at Planned Parenthood: Hi. I'm here because I have missed my period

Planned Parenthood nurse: Let us run some tests. (RUNS TESTS AND RETURNS.) As I feared, you appear to be pregnant.

Woman: What is "pregnant"?

Nurse: It means that if you just wait for 9 months, you will have a baby.

Woman: A baby?! Wow! Who knew? That is so great. Babies are so cute! I could keep it and play with it!

Nurse: Babies cost a lot of money. Do you have money? Do you know how you're going to take care of it? Do you have access to a day care? Do you want to keep waking up in the night to feed it?

Woman, despondent: No, that sounds hard. But gosh, babies are so cute. Could I just have it and give it to someone else who wants one?

Nurse, angry: Don't talk about that. (CATCHES HERSELF DROPPING CHARACTER, AND RECOVERS, PATTING THE WOMAN'S HEAD.) Oh no, dear. There's no one out there who wants a healthy white infant. Let's get you hooked up with an abortion instead.

Anti-choicers want you to believe women go into Planned Parenthood (and other abortion clinics) having not given a moment's thought about what they're going to do and are "steered" into abortions. Not only is that factually untrue, it doesn't even make sense unless you think women are thunderous idiots, every last one of them. Anti-choicers would like you to believe giving up a baby for adoption is an easy-breezy process, like throwing out a dress that has gone out of fashion. (Because they have so much respect for life, y'all.)

But if you give one second of thought to the question, you'll realize that thought is what is thunderously stupid. First of all, pregnancy takes a long time: People asking you questions, people congratulating you, etc. If  you're giving up the child, that's going to be a miserable, gut-wrenching slog. Plus, pregnancy itself is a lot of work, as much as antis deny it. And it's dangerous. And it alters your body. There's a reason that, as pressure to give up your baby rather than be a single mother declines, the vast majority of women choose motherhood. If you'll read that link you'll see that even as the abortion rate declines, due to improved contraception use, the percentage of women who give a child up for adoption is hitting a floor. The last available number was 2% of women giving birth outside of marriage. It's probably even lower than that now.

The fact that women decline to go through 9 months of pregnancy and childbirth to hand a baby off to strangers doesn't make them stupid or gullible. It shows they can do math and make basic common sense decisions. That's why it's dumb to act like women who call clinics to schedule abortions are stupid children who need to be scolded and lectured in hopes they will reconsider. What's to consider?

The only morons here are people like Rubio, who think that if you educate women about adoption, they're going to suddenly decide against abortion. Yeah, no. The reason women choose abortion is because they already have a good idea of what a massive ordeal adoption will be. Proper education isn't going to dissuade them from that view, because proper education would include admitting that it's a lot of work and a lot of heartache to go through the adoption process. Which is a choice women should have, absolutely. But those who choose against it know exactly what they are doing.