'My child is not a racist': Bakersfield mom defends son who tweeted he wanted to kill 'towel heads' on 9/11 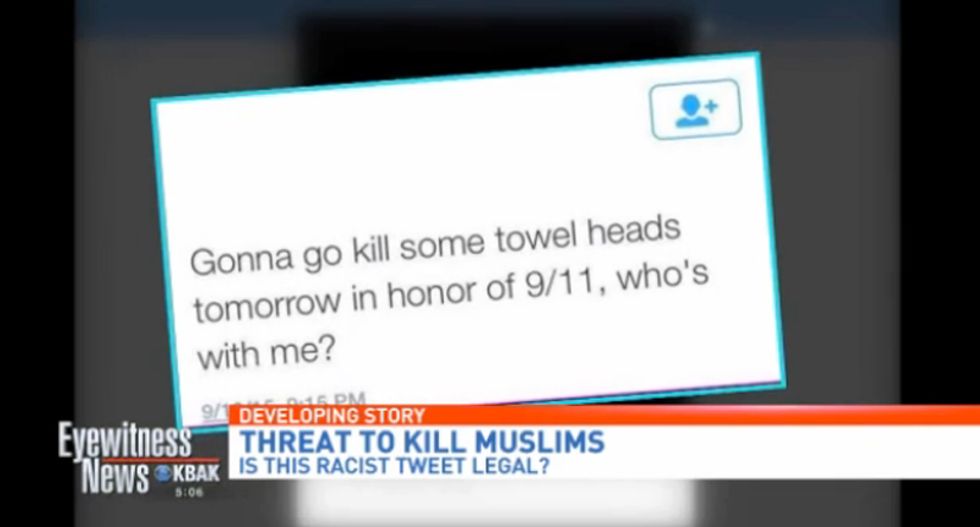 A California mom has come to the defense of her son after he stirred up the community by tweeting he wanted to "kill some towel heads" to honor 9/11, Bakersfield Now is reporting.

The tweet, since taken down along with the Twitter account, was the handiwork of a recent high school graduate whose mother stated that neither her son nor her family are racists.

Posted on the eve of the anniversary of the attacks on the U.S. dating back to 2001, the tweet read: "“Gonna go kill some towel heads tomorrow in honor of 9/11, who’s with me?”

Informed of the threat, Sgt. Joe Grubbs, a spokesperson for the Bakersfield Police Department, said that, while they investigate all threats, what the teen did is not illegal since he didn't make a specific threat against a person.

“Nothing about that is illegal. He’s well within his first amendment rights to say something like that,” Grubbs said, adding, “From this tweet, I don't think there's really anything to be scared about."

The mother of the unidentified teen initially told reporters that her son would not apologize, later issuing a statement that he was sorry, but that he would not be talking to reporters.

In a statement she wrote: "I would like to state that I never said my child wouldn't apologize. I just stated that he would not be interviewed, as he is a minor. He knows he made a huge mistake, and he is very sorry. He has been taught right from wrong and would never do something like that. My child is not racist. We are not racists. The story has been twisted. As a mother, I am protecting my child. That is my job."

Watch the video below from Bakersfield Now: