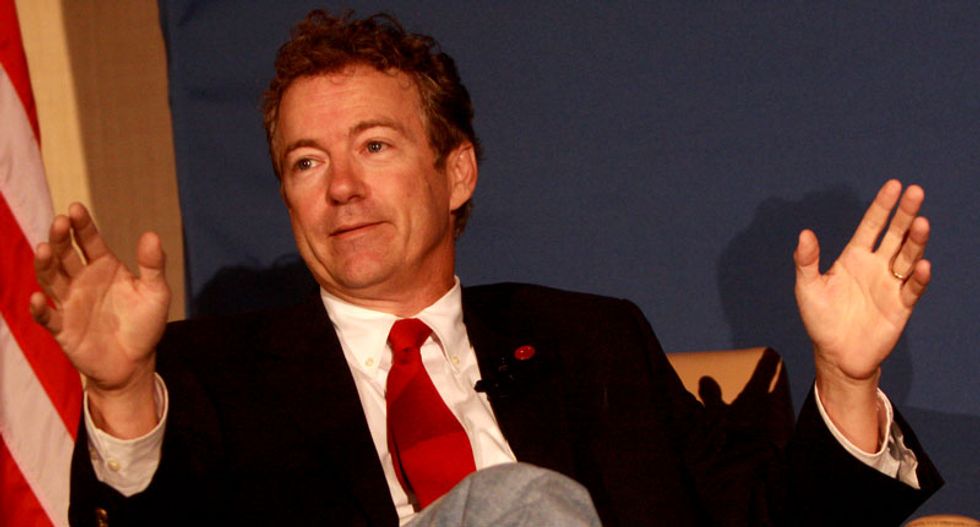 Sen. Rand Paul (R-KY) says the Donald Trump bubble may burst when voters realize that he may not be as antagonist as they would like.

However, the first-term senator and presidential candidate only hopes GOP voters come to their senses before handing the nomination to the real estate tycoon, reported the Boston Globe.

“It would probably be the worst defeat we’ve had since Goldwater, I’d predict, if Trump where the nominee,” Paul said.

Barry Goldwater, the five-term senator from Arizona, carried only six states in losing the 1964 presidential election to Lyndon B. Johnson.

Paul, who has described the Trump phenomenon as "insane," said the frontrunner's race-baiting bluster may be appealing to GOP primary voters, but he said Republicans may not realize the reality TV star is soft on many conservative issues.

“There is a lot of bluster and anger on Trump’s part, but a lot of his solutions are big government solutions,” Paul said. “I think eventually people are going to come to their senses and say, ‘Oh my God, I liked his angry vitriol, but I didn’t realize he was for gun control, Obamacare, increasing taxes, and taking private property (through eminent domain).’”

Paul tried to warn voters during last month's first primary debate that Trump was a moderate, but he still leads all other GOP candidates in polls by a wide margin.

“If one side doesn’t have ideas or has ideas that seem to be more liberal Democrat than Republican, we need to point these out to people,” he said. “It would be a tragedy if we were to get the nomination and then we discover we nominated a liberal Democrat. That would be a great irony.”

Paul was infuriated when Trump refused to rule out a third-party run if he fails to win the Republican nomination.