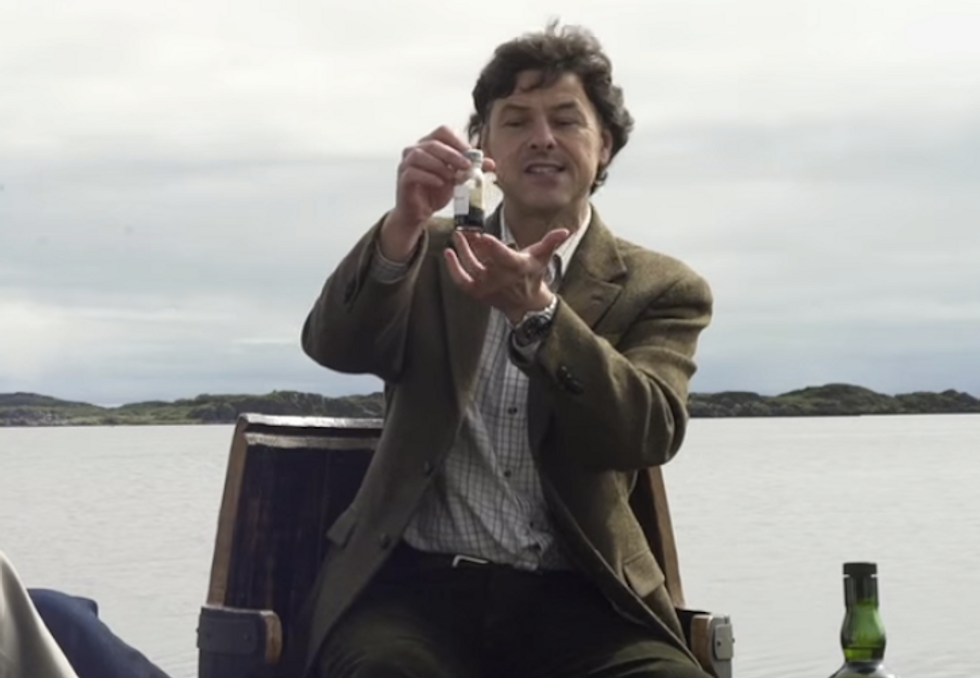 A Scottish distillery that sent un-matured malt whiskey into space to study the effect of near-zero gravity on its flavor now says that the results of the experiment have been "groundbreaking."

According to BBC News, Ardbeg Distillery, located on Islay -- a southern island in the Scottish Hebrides -- sent a vial of un-matured malt to the International Space Station (ISS) in 2011. Another vial was kept on Earth for comparison purposes.

Now the "space whiskey" has returned home to Islay, where tasters found "noticeably different" qualities in the two samples.

Ardberg said that the purpose of the experiment was to test the zero-gravity behavior of chemicals called terpenes, which make the building blocks for a whiskey's flavor. Terpenes are present in many foods and form the complex olfactory signatures of different strains of marijuana.

Notes from the tasters described the Earth sample's aroma as having "a woody aroma, reminiscent of an aged Ardbeg style, with hints of cedar, sweet smoke and aged balsamic vinegar, as well as raisins, treacle toffee, vanilla and burnt oranges."

The space sample's "intense" aroma, however, was described as having hints of "antiseptic smoke, rubber and smoked fish, along with a curious, perfumed note, like violet or cassis, and powerful woody tones, leading to a meaty aroma."

The Earth sample's flavor was described as having "woody, balsamic flavors" and "a distant fruitiness, some charcoal and antiseptic notes, leading to a long, lingering aftertaste, with flavors of gentle smoke, tar and creamy fudge."

Space whiskey, on the other hand, tastes like "smoked fruits such as prunes, raisins, sugared plums and cherries, earthy peat smoke, peppermint, aniseed, cinnamon and smoked bacon or hickory-smoked ham. The aftertaste is intense and long, with hints of wood, antiseptic lozenges and rubbery smoke."

The experiment, said Ardberg in a press release, paves the way for "unprecedented flavor profiles."

Dr Bill Lumsden, Ardbeg's director of distilling and whisky creation, told the BBC that in the space sample "much more of Ardbeg's smoky, phenolic character shone through - to reveal a different set of smoky flavors which I have not encountered here on earth before."

Phenols are a group of organic chemical compounds that range from neurotransmitters to highly aromatic chemicals that lend their smoky flavors to wine, whiskey and other comestibles like coffee.

"Ardbeg already has a complex character, but the results of our experiment show that there is potentially even more complexity that we can uncover, to reveal a different side to the whisky," said Lumdsen.

With Joe Biden in the White House, the disloyal opposition is not unreasonably seeking ways to chip away at his legitimacy. One way is make-believing he didn't win.1 Another is make-believing the moral foundation by which the Democrats held the former Republican president accountable suddenly doesn't matter now that the president is a Democrat. This is the reason everyone's talking about Andrew Cuomo.

As you know, he's the Democratic governor of the state of New York. What you might not know is that a third woman has emerged to accuse him of sexual misconduct of some variety. (This time, he allegedly tried to kiss her without her consent.) Last year, the press corps cast Cuomo as Donald Trump's antipode, a state leader stepping up to combat the covid pandemic when the president failed to do any such thing. It has since been revealed that the governor did a terrible job, specifically that his administration allowed an estimated 9,000 covid patients to enter nursing homes around the state.