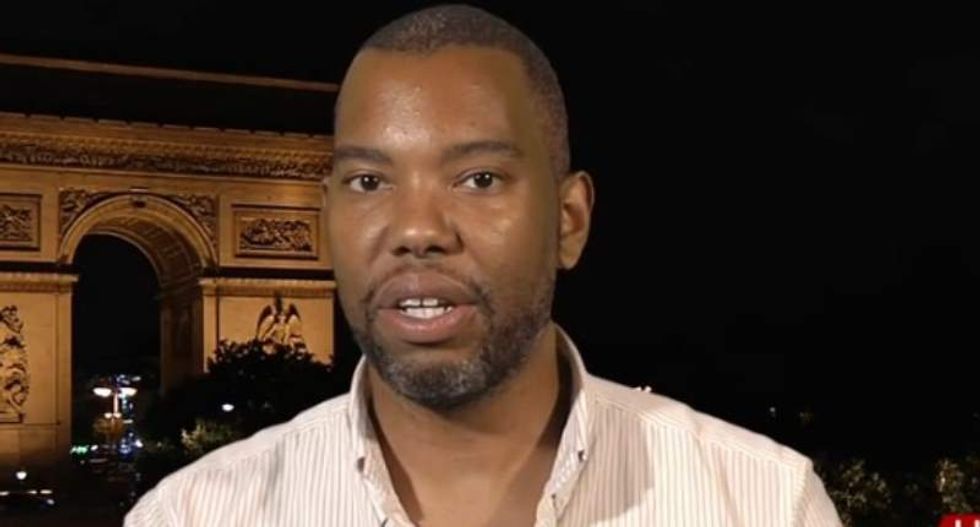 Author Ta-Nehisi Coates slammed conservatives who have pushed the idea of a 'war' against police while also attempting to paint the Black Lives Matter movement as being a part of it during an interview on Monday with MSNBC host Chris Hayes.

"When you see people like Ted Cruz, when you see Nikki Haley -- the governor of South Carolina -- running a campaign against Black Lives Matter, when you see Donald Trump and you see people standing up talking about a 'war on cops,' anybody who thinks progress in the era of prison reform is a done deal really should be humbled by that," Coates said. "God forbid crime actually rise for real; forget the 'Ferguson effect.' God forbid it actually happens."

Republicans and conservative pundits have argued that police are increasingly unsafe in their jobs, in part because of Black Lives Matter demonstrations. But in fact, departments are on a pace to lose 36 officers to fatal shootings this year, a 25-year-low.

Coates appeared in the wake of his latest story for The Atlantic, in which he argued that the "original intent" of the Moynihan Report -- published 50 years ago by then-Sen. Daniel Patrick Moynihan should be reclaimed.

He told Hayes that, while he did not care to use the phrase "both sides" in discussing political criticism, he felt that both liberals and conservatives had misunderstood the report.

"From the liberal perspective, the notion that Moynihan was in any way blaming the victim, I think, is just completely off," he argued. "Moynihan is very, very clear about where the blame should be. And not only that, if you listen to the speech that [then-President] Lyndon Johnson gave that was inspired by the Moynihan Report, he literally says -- even as he talks about family breakdown -- that blame must be laid at the feet of white society, a statement no president would make today."

But conservatives alluding to the report's emphasis on family, he continued, "are not so eager to make allusions to the fact that Moynihan was very much calling for government action -- for money to be spent on behalf of black people. He thought it should be done through the family, but he was a liberal who believed in government action. One of the regrettable decisions that Moynihan made was leaving out solutions, and the result was it left it open for folks who wanted to just lament the problem but felt that government should do nothing about it."

He also expressed skepticism when Hayes asked him about the prospect of bipartisan reforms to cut down the country's incarceration rate, which Coates reported stood at around 700 prisoners per 100,000 people.

"There is no country in the world with reliable numbers that's even competitive with us," he said. "At 400 per 100,000 we would be somewhere in the vicinity of Russia. We still would be a major outlier, and still an embarrassment to democracy in the world, but that would be some sort of progress."