There is water on Mars, but what does this mean for life? 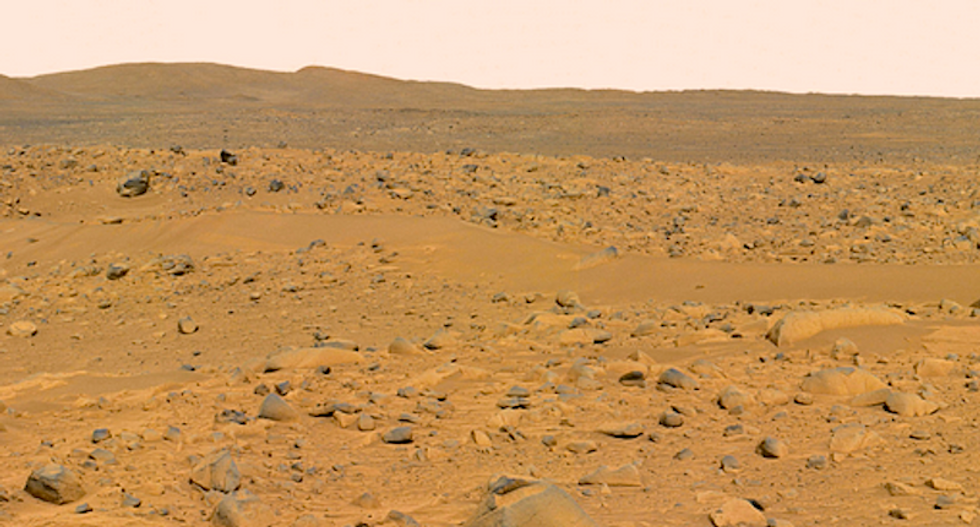 We’ve known for a long time that there’s water on Mars. Now we know – thanks to NASA’s latest announcement – that some of it is at the surface.

Features called recurring slope lineae – dark lines that appear on Mars seasonally – have been shown to have salts from briny water associated with them. It means that water is in its liquid form and is flowing at the surface of Mars today.

According to NASA, the probable mechanism enabling liquid water to exist is a process called deliquescence, where the salts absorb water from the atmosphere and then release it periodically.

But what does this mean for the prospects for life on Mars? The surface of Mars is a rotten place for life, being exposed to ultraviolet radiation that will kill anything pretty quickly. So it all depends on where the water that life requires comes from.

In this case, the water cycle is all at the surface. So any life would be trying to cling on in a very harsh environment. But another option is that it could be from acquifers, the plumbing system in the rock that feeds these seasonal streams.

If so, there might be regions near the surface where the conditions for life exist, which are protected from radiation. Suddenly the prospects for life gets a lot better. And even though the water on Mars appears to be very salty, we do know of extremophiles that are able to live in incredibly salty environments.

We won’t really know until a Mars probe goes to these lineae to have a look what’s there. The Curiosity rover might even be able to do this.

Curiosity landed in Gale crater three years ago and is currently climbing the 5km mountain in the middle of that crater, called Mount Sharp. That mountain contains a layered rock record of Mars' history. Every time the rover stops and analyses a rock, we could learn something that revolutionises our understanding of the history of Mars.

The larger implications of this week’s announcement may not relate to life. Water is a precious resource. Having access to it at the surface is a game changer when it comes to human exploration.

Astronauts need it to drink. Separate the oxygen and they can breath it too. And oxygen and hydrogen are the components for rocket fuel. Every kilogram of anything you take to Mars costs around A$3 million.

So having drinking water, oxygen and fuel accessible at the surface suddenly means you have much cheaper options for Mars missions. Future missions will carry further instruments and test technologies that will let us answer these questions.

The Mars 2020 mission is due to launch in 2020 and will involve another big rover – like Curiosity – able to travel large distances over difficult terrain, and with a massive array of analytical tools. One of those experiments is specifically designed for resource utilisation: it will take in the Martian atmosphere and extract oxygen from it.

The tools on this rover will open up even more exciting possibilities relating to life because they’ll be able to see beneath the surface. If there is still life on Mars, that’s where we’ll find it.

Beneath the surface of the red planet

NASA’s InSight mission, launching next year, is the first probe to carry geophysical instruments. The Seismic Experiment for Interior Structure (SEIS) is an extremely sensitive seismometer, built by the French Space Agency.

It is so sensitive that it will be able to detect tidal forces in Mars’ crust generated by its tiny moon, Phobos. It’s the first look we’ll have into the interior of Mars.

SEIS is looking deep. We’ll get better resolution into the near-surface with Mars 2020. One of the headline instruments is a minitiarised ground-penetrating radar package, built by the Norwegian Space Agency.

It will provide centimetre-scale images of the Martian sub-surface, areas accessible to the rovers' drill. And you don’t have to get too deep to get to regions that might sustain life.

So NASA’s latest discovery is exciting, but there are still plenty of questions that need answering from current and future missions to the red planet.

If you’d like to know a bit more about what missions to Mars might look like, Hollywood can takes you there this week in the movie The Martian, staring Matt Damon and directed by Ridley Scott, based on Andy Weir’s novel of the same name.

Damon’s Martian might find it a lot easier to live there than we thought before this week’s announcement.

Later this week on The Conversation, Helen Maynard-Casely will review the movie The Martian. What did she make of the science depicted in the movie: fact or fiction?