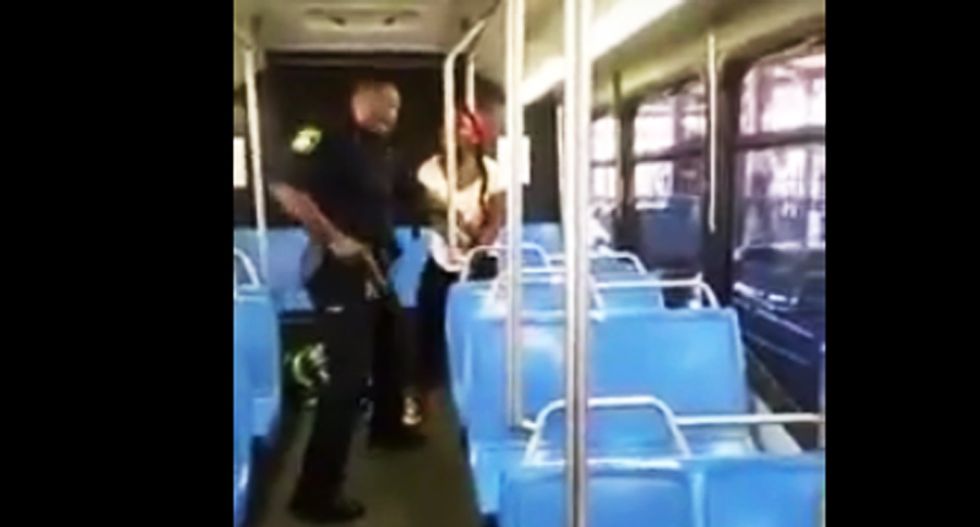 A tense situation in Boston came to a peaceful resolution when a Boston police officer holstered his service weapon during a struggle with a black woman on a bus after he listened to bystanders pleading with him to "drop the gun."

In a video posted on YouTube Friday night, the officer can be seen struggling with the woman near the end of the bus --reportedly over a petty theft charge --  and quickly drawing his gun as bystanders scrambled to get out of the way.

With multiple witnesses filming the altercation on their cell phones, bystanders can be heard yelling "drop the gun," "officer, please put down the gun" as the cop can be seen looking back at them and seeing he is being recorded.

After holstering his weapon, the officer continues to attempt to control the woman who flails at him while climbing up on bus seats in an attempt to get away.

Witnesses can heard pleading with her "sister, chill out" and "relax," saying "we're here for you."

Another officer enters the bus and -- after initially reaching for his weapon causing more calls to "put down the gun" -- takes control of the woman who continues to attempt to twist away as bystanders continue to tell her to stop resisting, saying they have filmed the whole altercation.

Watch the video below, uploaded to YouTube by BoomNation Station: