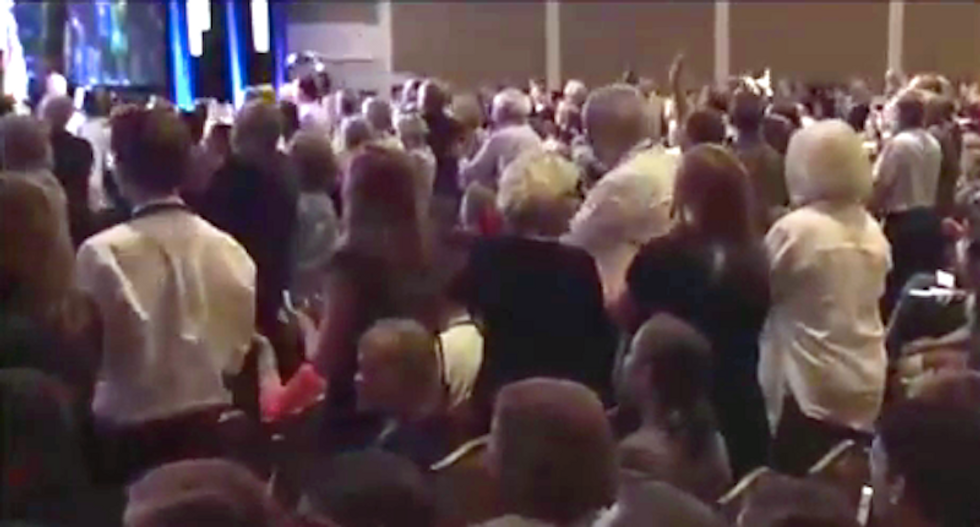 Religious conservatives broke into a rowdy and prolonged cheer when they learned House Speaker John Boehner (R-OH) would resign from Congress.

How can it be that we sent a Republican majority to Congress, and yet they're still not able to stop our country from sliding in the wrong direction?" Rubio said.

"We'll see how things progress," Rubio added. "Just a few minutes ago, Speaker Boehner announced that he will be resigning."

A cheer immediately went up, and the crowd screamed and clapped for a full 30 seconds, before the Republican presidential candidate began speaking again.

Watch the video posted online by The World is Yours News:

'Painful to watch': Challengers worry about Madison Cawthorn -- and feel he'd be 'relieved' to lose

It’s no secret there is a national baby formula shortage, but many in the GOP and on the right are falsely claiming it is the job of the federal government to ensure the supermarket shelves are stocked with food for infants. Ironically and hypocritically these are the same right-wingers who have been charging everyone on the left with their derogatory slur “socialists,” which is exactly what having the federal government manufacture or supply baby formula would be.

The right isn’t bothering to educate Americans about the problem or its causes, so I will: A small number (4) of multinational conglomerates own the baby formula market, the Trump administration entered into a trade agreement that makes it difficult and expensive to import baby formula, a voluntary recall of reportedly bacteria-contaminated formula after four infants got sick and two of them died, hoarding, and price-gouging.