Watch what happens when a Fox guest tells a black man that Kim Davis is like Martin Luther King, Jr. 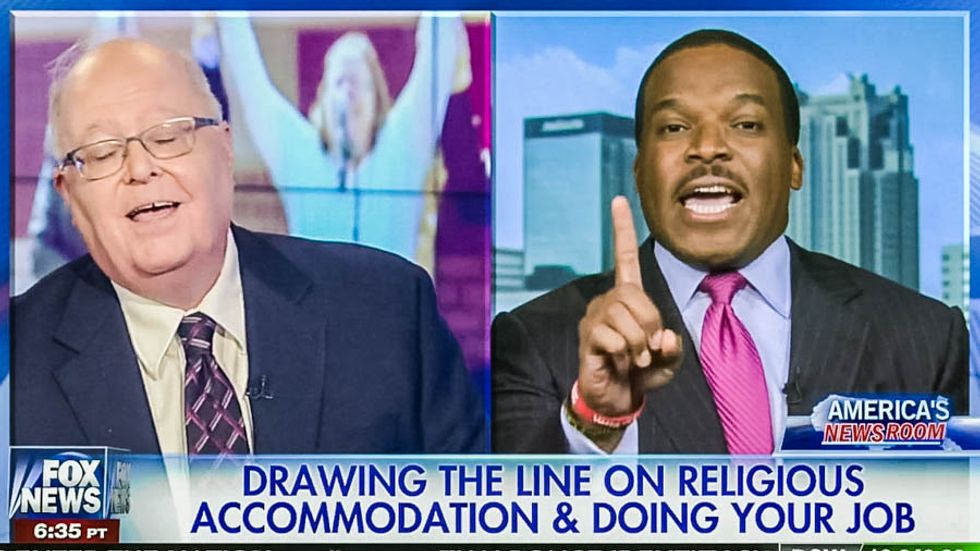 A Fox News panel descended into chaos on Wednesday when Catholic League founder Bill Donohue suggested to a black guest that Kim Davis was the new Martin Luther King, Jr.

Fox News host Martha MacCallum began her segment by asking defense attorney Eric Guster, who is African-American, if Davis should be given "accommodations" to alleviate the need for her to issue same-sex marriage licenses, a job she was elected to do.

"We're getting so far away from what we should do as a society," Guster said. "Follow the law and stop blaming religious freedom on every single thing that they can. She needs to follow the law and she was wrong."

"If you are the circuit clerk of a county, if you are the clerk and it is your job to issue marriage licenses even if you don't agree with it then simply don't do it," he continued. "You have to simply quit that job or move along... She was trying to be this martyr for religious conscience [and] she simply is not. She's simply a bigot."

That remark did not sit well with Donohue.

"You know what I find amazing," the Catholic League leader opined. "I'm sure that Eric regards Martin Luther King as a hero. I certainly do. When he was sitting in the jail, he wrote the 'Letter from a Birmingham Jail' invoking St. Augustine, that you're obligated not to follow an unjust law."

"Civil disobedience is based on moral persuasion," he insisted. "She's trying to morally persuade the country by protesting a law, which by the way, the Supreme Court made this up out of whole cloth. Nowhere is it found in the Constitution that two men can get married."

"Eric, I want you to address the Martin Luther King comparison," MacCallum said, turning to Guster.

"This is not a comparison," Guster shot back. "Martin Luther King would want everyone to have the same equal rights as everyone else. That is the Martin Luther King comparison. He wouldn't want to associate with someone who was a bigot, who was against people for what they believed in and who they are, and that is exactly what Kim Davis does."

"So if I believe that a man and a woman should get married and not two men, I'm a bigot, right?" Donohue interrupted. "This is the new idea. You know what, that doesn't work, fella."

"This is the same the same example such as interracial marriage!" Guster shouted over Donohue. "I'm from Birmingham. So, I know civil rights. When you have a situation when two people want to get married and it's the law of the land, allow them to get married. That is her job."

"So I know about civil rights, young man," the defense attorney added, waving his finger. "You should know that."

"You should read more about what Martin Luther King said!" Donohue yelled back.

"Oh, I know more about Martin Luther King than you do!" Guster exclaimed. "So, you're wrong."