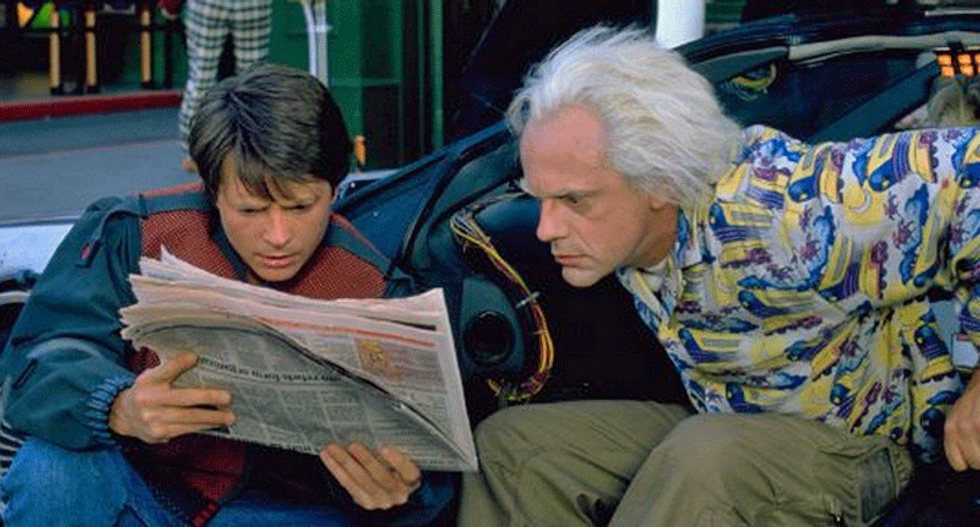 Screenshot from "Back to the Future II" (Amblin Entertainment/Universal Pictures)

The art of futurology – predicting what future society might look like – is plagued with difficulties. Books, films, TV shows and plays that feature such efforts are all judged through the prism of hindsight.

The 1989 film Back To The Future Part II (BTTF2) saw its characters travel in time to 21 October 2015 and experience a world hugely different to the 1980s one they came from. Now we have reached 2015, it is clear that some of the predictions have proved surprisingly accurate – while others have fallen woefully flat. But we’re also surprisingly close to seeing a few of the film’s wackier technologies become reality.

The film sees teenage Marty McFly (played by Michael J Fox) and inventor Dr Emmett Brown (aka Doc, played by Christopher Lloyd) travel to 2015 in a fusion-powered DeLorean time machine. Of course, McFly needs the right outfit to blend in as he violates the law of space-time causality, so in the film’s 2015, he sports an automatically fitting and self-drying jacket with self-tightening high-top trainers. This kind of outfit still sounds distinctly like science fiction but it’s actually closer to fact than you might think.

Bringing this technology to a department store near you will involve integrating novel materials with everyday clothes. But instead of mechanical systems that can automatically change the size of a jacket, we’re more likely to see the use of something called memory material. This is a material that can be bent or stretched into different shapes but then return to its original programmed design. Memory material is already used to create glasses that if squashed will recover to a perfect fit.

While we might not yet have jackets with built-in blow-dryers, in other ways real world clothing technology will soon far surpass that of BTTF2. Flexible materials that can generate electricity from body heat, sunlight, and motion already exist in research labs and it won’t take much to integrate them into our everyday clothing.

The last couple of years have also seen an explosion of wearable technologies that can monitor our vital signs. Soon, flexible electronics and transducers will enable our clothing to know what we are doing, how we are feeling and our state of health. The list of possibilities is endless.

The home of tomorrow, today

In the 2015 of BTTF2, the technologies in and around McFly’s house are manifold, including rehydratable pizzas, a hydroponic garden dining table centrepiece, and Skype-like video calls made with what looks suspiciously like Google Glass.

But what about today? We’ve had rehydratable food since the advent of the space age but its use on Earth isn’t really clear. Besides, rehydratable pizzas would be disgusting.

Home hydroponics certainly exist but are mostly used for growing, well, not vegetables. And while video-phone glasses exist in the form of Google Glass, so far consumers have roundly rejected them.

The film rather absurdly predicted that fax machines would be essential in every room of the home, while failing to see the enormous impact that the internet and social media, such as Facebook and Twitter, now plays in our day-to-day lives.

The two main modes of transport in the movie have to be among the most desired by its child (and adult) viewers: hoverboards and flying cars. Earlier this year, Lexus unveiled a real-life working hoverboard that uses liquid nitrogen to create a superconducting magnet that lifts the board above a specially designed track. It’s effectively a mini magnetic levitation train for your feet.

Unfortunately, the need for dedicated tracks and regular liquid nitrogen top-ups mean that the Lexus device in its current form probably wouldn’t be worth the large pricetag it would come with.

Likewise, several companies have developed what they call “flying cars” but so far they look more like roadworthy planes with fold-away wings and have yet to find a market.

Even with the reality-check that comes with a few decades' physics experience, I still dream of a world where Mr Fusion, a kitchen appliance-style home nuclear power generator, provides cheap and clean energy for everyone. Such an invention could enable some of the more speculative ideas in BTTF2, plus a whole bunch of innovations not even dreamt of yet, to become reality.

Scientists are currently building what they hope will be the first experimental fusion reactor to produce more energy than it uses, with very little radioactive waste compared to existing nuclear fission reactors. The International Tokomak Experimental Reactor (ITER) will be housed in a 60m-tall building in southern France and use superconducting magnets to manipulate plasma made up of hydrogen ions heated to 150 million℃. The ions will fuse together to create helium and release large amounts of energy, replicating the reaction that powers the Sun but at temperatures 10 times hotter.

ITER will start operating around 2020 and test ideas in fusion research for 20 years, hopefully confirming that we can harness this energy production mechanism here on Earth. But it’s hard to imagine fitting something like ITER to the back of a DeLorean or keeping one on your kitchen counter, let alone fuelling it with rubbish. We might have to wait a bit longer for that.