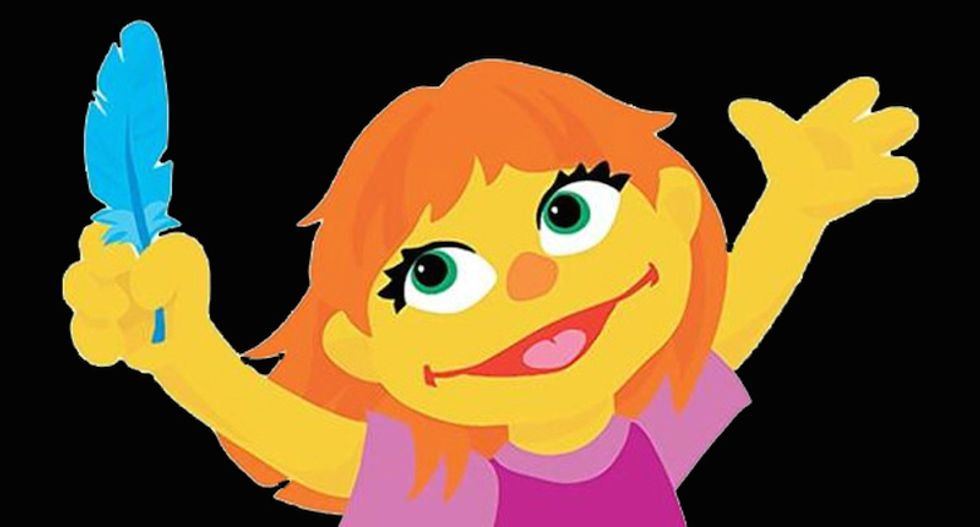 "Sesame Street" is introducing a new Muppet character who has autism -- and some anti-vaxxers are furious.

"The rollout of autistic Julia is Sesame Street's attempt to 'normalize' vaccine injuries and depict those victimized by vaccines as happy, 'amazing' children rather than admitting the truth that vaccines cause autism in some children and we should therefore make vaccines safer and less frequent to save those children from a lifetime of neurological damage," wrote Mike "The Health Ranger" Adams, of Natural News.

While many parents, physicians and educators hailed the character's introduction, some critics have complained that Julia is a girl -- although boys are far more likely to have autism -- or pointed out that her autism is relatively moderate.

Adams, however, described the character as "yet another sickening example of the absolute mental derangement of modern society."

Most anti-vaccine advocates believe vaccines cause autism, although numerous scientific studies have debunked that theory and the Centers for Disease Control recommends vaccines as safe.

But Adams and other anti-vaxxers appear to be blaming the victims of what they see as a conspiracy between the government and pharmaceutical companies.

"I'm so glad I'm not the only one who thought this!! I was like why in the world is everyone celebrating this?!!" posted Lindsay Serrahn. "Normalize autism! It's not normal, it's cruel that vax companies help cause this and then it's oh this is normal."

The father of a boy with Asperger's syndrome, a form of autism, pointed out that the character was intended to help other children better understand children they might meet who have autism -- but the anti-vaxxer crowd shouted him down.

"On the surface it's promoting acceptance but it's also trying to condition young children to think autism at today's rate is normal, (but) we know that is not true," posted Sarah White, who speculated Sesame Street was part of the conspiracy. "These shows are owned by networks controlled by big money. They have no boundaries. Not even what goes into our children's heads. Why do you think this is conspiratorial? It's happening."

Other anti-vaxxers proposed shutting down the "sick a**holes" at PBS.

"(It's) not (an overreaction) when you analyse (sic) their childrens' programming; intensely racist, derogatory and demeaning to white children," complained Dara McNamara.

Other anti-vaxxers complained that the character should be a black boy to be more representative of children who have autism -- and that's a point Adams, "The Health Ranger," made in his overheated style.

"In the name of 'vaccine science,' they actively altered data to eliminate the statistical link between vaccines and autism in African-American boys, thereby condemning millions of young black babies to a life of permanent neurological damage. #BlackLivesDONTmatter to the vaccine industry, it seems," Adams wrote.

He also complained that another Sesame Street character, Elmo, "has been exploited as a literal puppet by the vaccine industry" to encourage parents and children to get vaccinated for preventable diseases -- such as measles.

"They try to brush it off as a normal disease that anyone can get like flippen measles!" posted Lizette Lamprecht. "Morons!"

Autism is a developmental disorder of the brain, not a disease, and is not contagious.