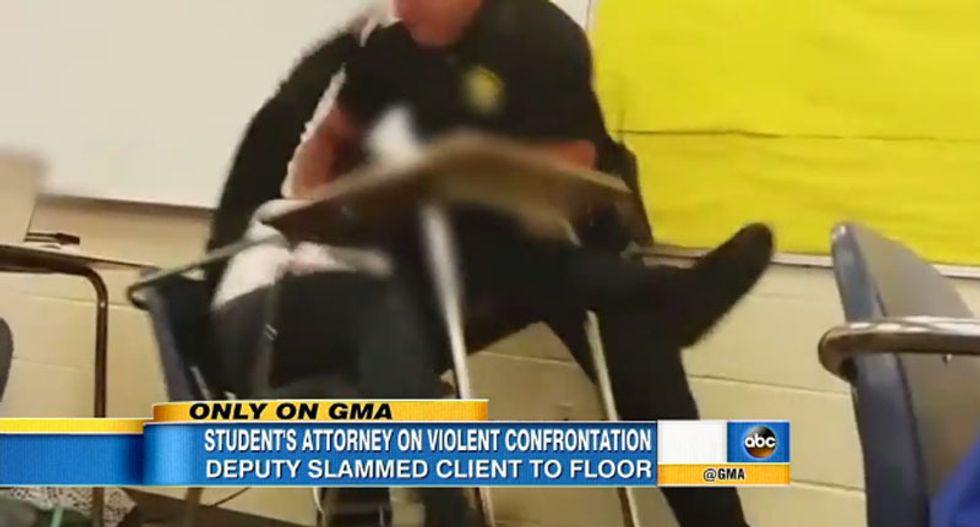 An influential South Carolina Democrat plans to represent a teenage girl thrown to the ground by a school resource officer -- and he intends to change a state law that allows police to arrest students for being disruptive in class.

Richland County Deputy Ben Fields was fired Wednesday for violating agency policy when he picked up the 16-year-old girl and threw her across a classroom during the arrest at Spring Valley High School.

State Rep. Todd Rutherford (D-Columbia) told WLTX-TV the 16-year-old girl suffered arm, neck and back injuries when Fields grabbed her by the throat and threw her to the ground after the teen refused to hand over her cell phone to a teacher.

"He weighs about 300 pounds," Rutherford said. "She is a student who is 16 years old, who now has a cast on her arm, a band aid on her neck, and neck and back problems. There’s something wrong here."

Rutherford told the New York Daily News that the teen recently lost her mother and is living in a foster home. The teen's foster mother said the girl was "devastated and emotionally traumatized by all that has happened to her," according to the Daily News.

Rutherford said that lawmakers must tighten up restrictions on use of force by school resources officers such as Fields -- who students say was "known for slamming" pregnant women and teenage girls to the ground.

"The legislature needs to take action, and make sure our students are not the targets of rogue police officers called 'Officer Slam' who are going to walk in and brutalize them at a moment’s notice," Rutherford said.

Rutherford, who serves as the Democratic Minority Leader of the South Carolina House of Representatives, also plans to represent 18-year-old Niya Kenny -- who was also arrested for "disturbing school" while video recording the violent attack on her classmate.

"We passed that law several years ago, and when we did arrests of students shot through the roof," Rutherford told the TV station. "They were getting arrested for everything because it meets with the statute. The statute is unconstitutionally broad, and everyone knows it."

The lawmaker said he was shocked by the deputy's actions -- which he said were completely unjustified.

"I had no words because that was something that simply should not happen," Rutherford said. "It was a classroom. We’re not talking about a roadside setting where you’re worried about the safety of an officer, we’re not talking about any setting where the officer’s safety is in jeopardy and he needs to make sure he controls the situation. It was a classroom."

He said school resource officers are placed in schools to protect students from outsiders and threats involving guns or knives -- and not to punish students for showing disrespect.

"Law enforcement officers simply need to establish a line that they cannot cross," Rutherford said. "Unfortunately, that line is blurry, and it leads a lot of people to believe that if you don’t do exactly what a law enforcement officer asks, that he gets to brutalize you and beat you up in front of other people -- and that’s not true."

Watch video, via ABC News, below:

The parade on Wednesday to mark the 75th founding anniversary of North Korea's armed forces featured fireworks, military bands and uniformed soldiers marching in unison to spell out "2.8" -- the date of the celebration -- and "75", the official Korean Central News Agency reported.

Former President Donald Trump says he'll provide a DNA sample to defend himself against a rape claim by E. Jean Carroll, but legal experts are dubious the offer is genuine.

The advice columnist still has a black coat dress that she claims she was wearing during the alleged sexual assault in the mid-1990s, which could still have DNA evidence, and Trump finally agreed last week that he would at some point allow his lawyers to collect a sample for comparison, reported The Daily Beast.