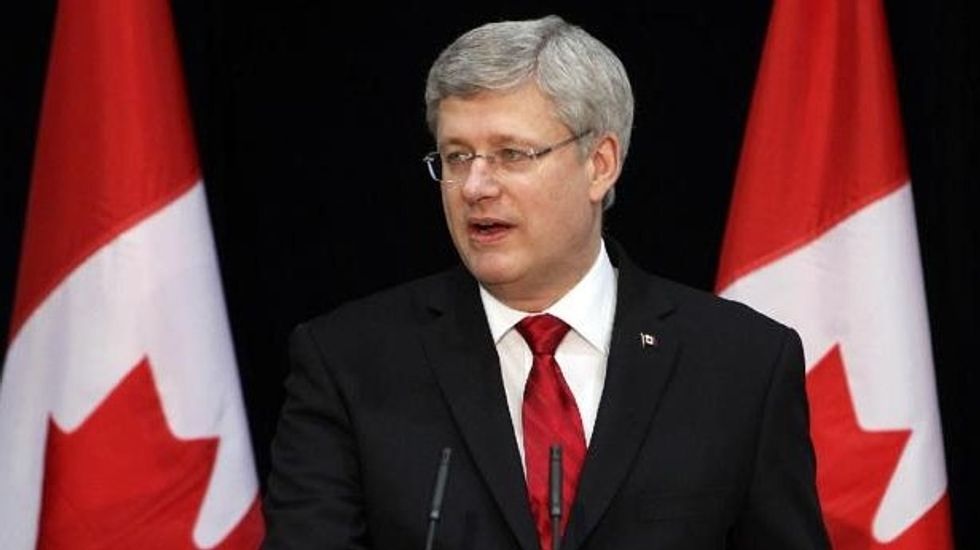 Polling released Sunday on the eve of the vote showed the Liberals, after a late surge from third place, with a seven-point lead ahead of the Tories.

Public opinion, however, has swung wildly -- up to 12 percentage points -- during the campaign. And many of Canada's 26.4 million registered voters remain undecided.

At a final campaign stop in Calgary, Alberta, Trudeau said the Liberals offer "not just a change in government, but a better government."

The 43-year-old is the son of former prime minister Pierre Trudeau, who is considered the father of modern Canada.

He is hoping for a repeat of the "Trudeaumania" that in 1968 replaced the plodding management style of the old guard with his late father's bullish vision and flare that Canadians were craving.

But Harper warned Canadians would pay more taxes under a Liberal government that would also plunge the nation back into deficit.

"Every single vote for a Conservative candidate is a vote to protect our economy against Liberal... deficits and taxes," he said.

"They may try to fool you by giving the old car a fresh coat of paint. But as we've seen, the Liberal party is just as rusted-out underneath as it was when Canadians kicked them out of office for corruption the last time," Mulcair said.

The first polling stations were to open at 0830 am (1100 GMT) in Newfoundland and Labrador, Canada's most easterly province.

The 11-week campaign, which was one of the longest in Canadian history, gave voters unprecedented exposure to the party leaders and their ideas in five debates and almost daily stump speeches.

Along the bruising way was a record influx of people fleeing war in Syria, a court ruling quashing a veil ban and a recession -- crises that gave Canadians a chance to assess parties' reactions in near-real time.

At times, the battle descended into personal attacks, with Tory ads suggesting that Trudeau -- with his youthful good looks -- is "just not ready" to be prime minister.

In one that played out early on, Harper's former chief of staff testified against a Conservative senator accused of bribery, breach of trust and fraud.

Another involved the co-chair of the Liberal campaign, who resigned Wednesday after a leaked email showed he was shilling for a pipeline builder during the campaign.

In power since 2006, Harper is seeking a fourth mandate, hoping to hold on to key Tory support in the western plains and in suburban Toronto, Canada's largest city.

Over the past nine years, he has led two minority governments and one majority government, under mandates that have never exceeded 40 percent of the popular vote.

But Harper is now up against a strong desire for a change in government and his personal image is at an all-time low -- highlighted by Tory television spots that open with "Stephen Harper may not be perfect..."

The NDP hopes to build on its second-place finish in the last ballot, in 2011, and govern for the first time ever.

But the NDP has stumbled in recent weeks, losing key support in Quebec province over its opposition to a popular ban on the niqab, or veil.

According to the latest Nanos survey, the Liberals have 37.3 percent support versus 30.5 percent for the Tories, while the NDP sank to 22.1 percent. The margin of error is 2.2 percent.