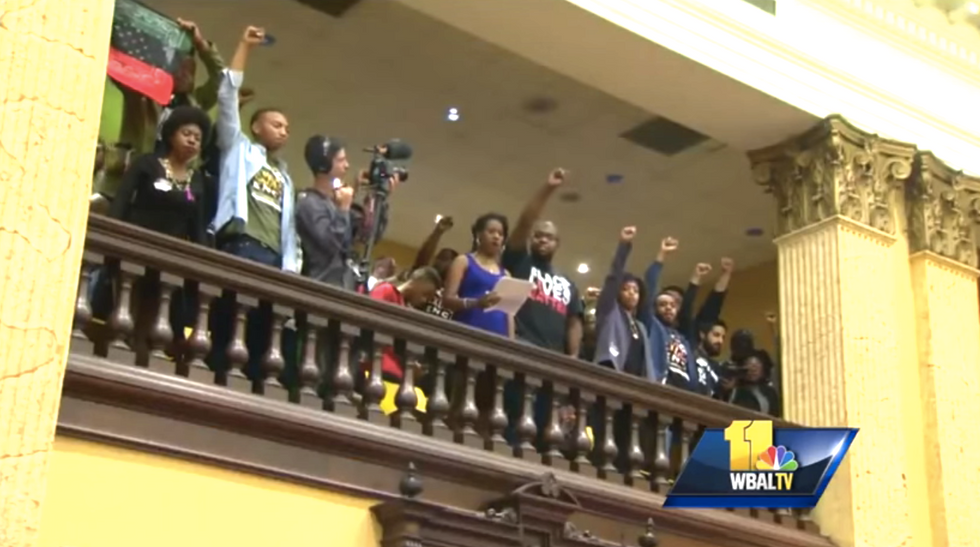 Activists have taken over Baltimore, Maryland's City Hall to protest the permanent appointment of the city's current interim police commissioner.

According to the New York Daily News, protesters from the Baltimore Uprising movement have said they will not leave the building until Mayor Stephanie Rawlings-Blake and acting Police Commissioner Kevin Davis hear out a list of their demands.

The group of high school students and community activists stood and chanted in the upper gallery of City Council chambers as a subcommittee prepared to vote whether the city should make Davis' position as police commissioner permanent. The subcommittee approved Davis and the full city council is scheduled to take up the vote on Monday.

"All night, all day, we will fight for Freddie Gray!" the group chanted. "No justice, no peace!"

Gray is the black Baltimore man who died of injuries sustained while in police custody in April. In May, a grand jury handed down indictments for all 6 police officers implicated in the killing.

In July, police Commissioner Anthony Batts was fired from his job and Davis was appointed as acting commissioner.

Among the protesters' demands are a request that the police stop using armored military-style equipment and vehicles against civilian protesters. They would also like officers to wear badges and name tags at all times and for protests on a large scale to be allowed in the city.

The Baltimore Sun reported that at least 12 protesters have been arrested and jailed, according to reports posted to the #BaltimoreUprising hashtag on the social medium Twitter.

Watch a video statement from Tre Murphy of Baltimore BLOC, embedded below: