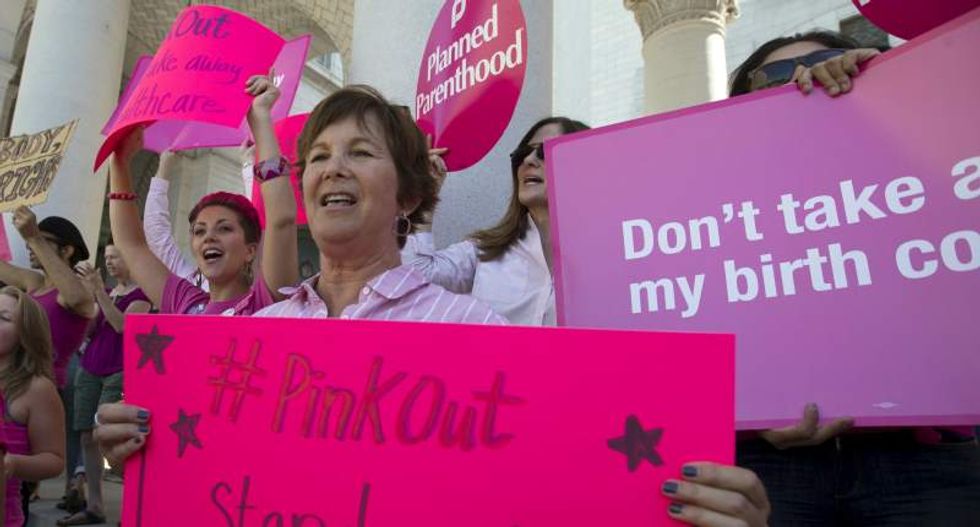 Activists hold signs as they rally in support of Planned Parenthood on "National Pink Out Day" on the steps of City Hall in Los Angeles, California on Sept. 29, 2015. Photo by Mario Anzuoni for Reuters.

A U.S. district judge on Friday ordered Arkansas to continue payments to Planned Parenthood for its treatment of three women who challenged Governor Asa Hutchinson’s directive cutting off Medicaid reimbursements to the organization.

The order applied only to the cases of the three plaintiffs, although the judge suggested that Planned Parenthood as an organization might successfully challenge the cutoff.

Judge Kristine Baker held that the three women, identified in court papers as “Jane Does,” had demonstrated they would incur irreparable harm should they not be able to access contraceptive care and other services through Planned Parenthood.

Arkansas is one of several Republican-controlled states that have cut funds for the organization after the release of videos by an anti-abortion activist group, the Center for Medical Progress, in which Planned Parenthood officials are seen discussing transactions involving fetal tissue.

Planned Parenthood has denied any wrongdoing.

The preliminary injunction the judge issued on Friday follows a temporary restraining order she put in place two weeks ago.

The judge declined to bar the introduction of the videos in further proceedings, but dismissed them from immediate consideration as "inadmissible hearsay."

Hutchinson, a Republican, said in a statement the ruling was limited to the three women and that he would direct the state health department to "prohibit funding to Planned Parenthood consistent with the Court’s ruling."

Planned Parenthood gets about $500 million annually in federal funds, largely in reimbursements under Medicaid, the government's healthcare program for the poor.

In Arkansas, reaction from social conservatives to the judge's move was swift.

"Arkansans have made it clear time and again they do not want public dollars subsidizing abortions,” said Jerry Cox, president of the Family Council of Arkansas.

Planned Parenthood has said almost all of its work in the state covered services other than abortions.

The Arkansas contracts with Planned Parenthood involved services including nurse practitioners, pharmacy and family planning and were delivered through the Arkansas Medicaid program. No state funds were used for abortions, except in the case of incest, rape or when the life of the mother was at stake, state health officials said.

A spokesman for the state attorney general said no decision had been made regarding an appeal of the ruling.