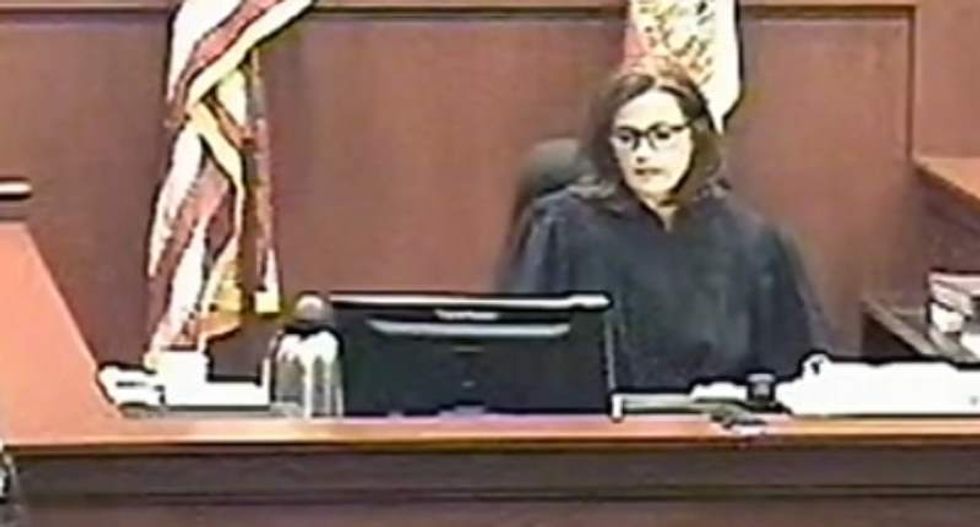 A judge in Seminole County, Florida will not discuss her harsh tone toward a sobbing domestic violence victim whom she sentenced to three days in jail, WFTV-TV reported.

WFTV published footage of the July hearing on Tuesday. Collins has refused to comment on her decision because the woman could still file an appeal.

Collins, who was re-elected last year, sent the woman to jail for refusing a court order to appear during the trial of her abuser. According to WFTV, she also had the option of fining the woman or ordering her to perform community service for failing to respond to the subpoena.

The unidentified man, who is the father of the victim's 1-year-old son, was accused of choking her and grabbing a kitchen knife. The woman says in courtroom footage that she refused to attend the trial because she was dealing with depression.

"Why didn't you show up to court?" Collins asks.

"You think you're going to have anxiety now?" Collins says. "You haven't even seen anxiety. We had a jury -- six people there -- ready to try [the abuser], who has a prior criminal history of domestic violence."

Collins later asks the woman whether her statements to police following the man's arrest in April were true. The woman says that they were, then explains, "I'm trying to move on with my life," saying she was living with her parents and had sold all of her possessions because she was not able to receive child support. Her abuser, she said, lost his job after being sentenced to 16 days in jail on charges of simple battery.

"I'm just not in a good place right now," the woman says while audibly holding back tears.

"And violating your court order did not do anything for you," the judge responds. "I find you in contempt of court. I hereby sentence you to three days in the county jail."

The victim can be heard crying as bailiffs approach. Collins then orders her to turn around in order to be handcuffed.

WFTV also reported that Collins' actions were described as "appalling" by Jeanne Gold, whose organization, SafeHouse, provides housing for domestic abuse survivors. The woman, Gold said, would likely never call police for assistance if her safety were threatened again.

Collins was also criticized by Belvin Perry, a former chief judge for the state's Ninth Judicial Circuit Court and a WFTV analyst.

"Sometimes the judges, in the haste of trying to do their jobs, forget the big picture," Perry said.

Watch Collins' discussion with the victim, as posted by WFTV, below.