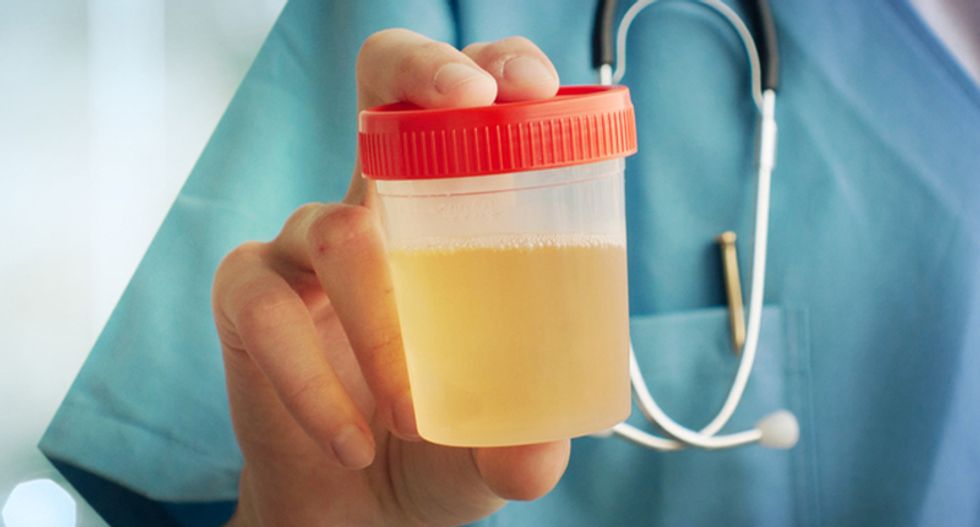 Before Scott Walker unhappily shuffled away from the GOP primary race, he tried to stand out in the crowded field with a right-wing classic: striving to make life harder for poor people who need government aid. Since July, Walker has boasted about his efforts to force every person who applies for food stamps (SNAP) to undergo a drug test. The ever-ambitious Wisconsin Governor even preemptively sued the federal government to ensure that the U.S. Department of Agriculture, which administers food stamps, wouldn't quash the program.

Making people pass a urine test before they can have food is for their own good, Walker insisted in September, telling the Huffington Post, "We're trying to help people who are in need of our assistance to get jobs [...] because the best thing we can do with them is to make sure they get the skills and education they need, and make sure they are drug free if they have an addiction, to get back in the workforce."

In fact, drug testing people who need government assistance hits pretty much every measure of extraordinarily bad policy: it doesn't work, it burns tax money, and it aims to solve a problem that doesn't exist.

But Walker won't be the last ambitious right-wing politician to propose drug testing government aid recipients, for obvious political reasons (though, as the Post points out, it didn't help his Presidential bid.)

"One of the things that makes these laws so dangerous is that there's no political risk involved for lawmakers," says ACLU staff lawyer Jason Williamson, who succesfully litigated a lawsuit against a drug testing law in Florida. "It's an easy way to go on record to say you're trying to save the state some money, help people addicted to drugs, make sure tax payer money not spent on a drug habit. Sounds great as a sound bite, not accurate in a number of ways."

Here are some of the reasons drug testing aid recipients is not very smart.

1. Welfare recipients don't do drugs at much higher rates than anyone else

Conservative lawmakers continue to exploit the myth that all poor people are blowing taxpayer money on all kinds of exciting and nefarious things. But most low-income people spend their money on necessities like food.

"There's no reason to have extra suspicion of people simply because they are poor," Williamson points out.

Social science and addiction researchers haven't been able to precisely gauge rates of substance use and abuse among low-income people compared to the general population. The data is imperfect, based on self-reporting, and does not always differentiate between very different groups who live below the poverty line. But researchers largely agree that there's no evidence that substance abuse among aid recipients is a big problem that warrants the privacy intrusion of drug testing someone just because they're poor.

University of Chicago social scientist Harold Pollack, who has studied drug use among recipients of welfare (TANF) benefits, wrote in a Washington Post op-ed,  "However one runs the numbers, illicit drug use disorders are not common among welfare recipients. Other physical and mental health problems are far more prevalent. Yet these less-moralized concerns receive much less attention from legislators or the general public."

2. It doesn't actually catch people who use drugs

Even if tons of welfare recipients were using their measly checks as weed rolling papers, drug testing programs can't seem to find them. Tennessee is the latest example of a state where a drug testing program yielded almost comically poor results. A year after the state started testing all applicants for a welfare program for families with kids, they ended up denying assistance to around 30 people -- out of 28,559 who applied, reported WMOT.

Earlier this year Think Progress assembled results from 7 states that have tried drug testing recipients of welfare or food stamps in the last few years. Out of 38,970 welfare applicants, 48 people got positive drug tests in Missouri. Utah blew $64,566 to catch 29 people who did llegal drugs. Arizona found 3, and Mississippi just 2.

3. It's ineffective partly because it's unconstitutional

Ironically, the programs' ineffectiveness stem from their unconstitutionality. As Gov. Rick Scott discovered in Florida, the courts don't see poverty as a good reason to stomp all over people's privacy rights (that is, at least, when it comes to drug testing).

Because of that, states have to establish "reasonable suspicion" that a person is abusing illegal substances, so that the laws have a chance of standing up to legal challenge. Many states have relied on the SASSI questionnaire, a psychological test that determines the likelihood that someone may be an addict. Some of the questions include, "Most people would lie to get what they want" and "Much of my life is uninteresting" to determine if someone is at risk for addiction, as AlterNet has previously reported.

Williamson points out that the test was developed for use by drug and alcohol treatment centers, not for screening welfare applicants. In fact, the researchers who developed the test issued a scathing critique of lawmakers who use it to deny aid. On their website, they point out that the tool is meant to assess addiction risk, not whether someone is using drugs. They also note that the test is not designed in itself to determine if someone is an addict, saying "these screening results are not themselves sufficient to constitute an official clinical diagnosis of substance use disorder – full clinical evaluations by qualified professionals are necessary to provide these diagnoses."

They also stated their ethical objections:

4. Drug use and addiction are not the same thing

Despite evidence at the last Republican debate that some GOP candidates are hip to the pot, most lawmakers are wildly misinformed about addiction, drug use and the effectiveness of rehab.

As the SASSI researchers note, the urine tests miss alcohol, which is far more potentially addictive than marijuana. Many people use recreational drugs without it interfering in their lives. Actual addiction often stems from trauma, and punitive measures can be re-traumatizing.

And the idea that people who suffer from addiction just need some tough love that'll inspire them to turn their lives around is not borne out by research. That is why so many psychological and addiction experts and groups oppose punitive measures, such as putting people in jail or taking their kids away, as a way to deal with addiction.

5. Shaming people is cruel and it does not work

While drug testing programs seem to fail by most measures of smart public policy, they do succeed in shaming struggling Americans while burning a bunch of taxpayer cash.

Think Progress estimates that the 7 states with drug testing programs on the books have collectively spent over a million dollars to net very few users.

The plaintiff in the Florida case was a vet. He'd fought in Iraq and didn't think it was right to have to pee in a cup to get aid.

"For him, he absolutely felt violated as someone who fought for the country now asked to compromise constitutional right," Williamson says.