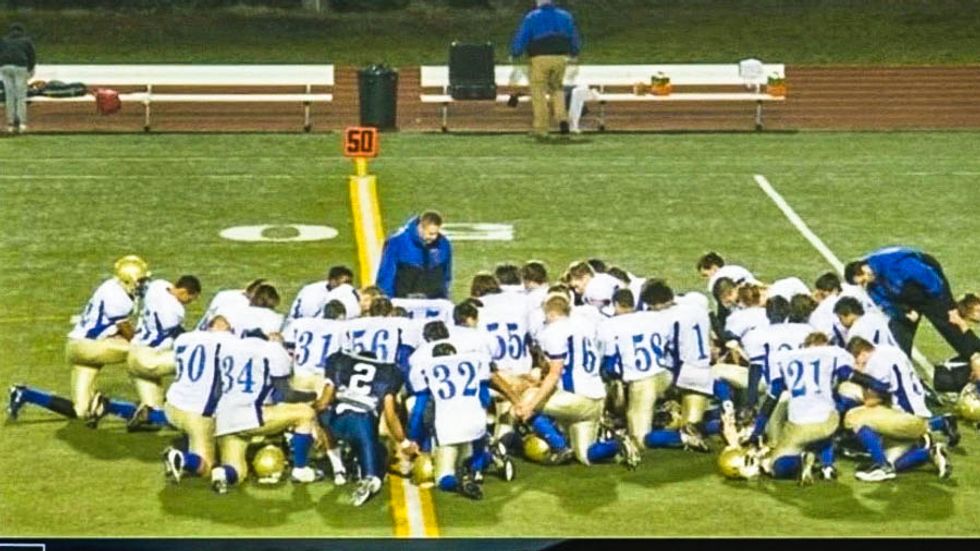 A high school football coach who has been ordered to stop leading team prayers on the 50-yard line said on Thursday that he would continue the tradition at the risk of being fired because he has an "agreement with God."

Joseph Kennedy, head coach at Bremerton High School in Washington state, was told by the school district last month that his 9-year-old tradition of holding team prayers violated the Establishment Clause of the First Amendment.

Although Kennedy agreed to stop pre-game prayers with a "captive audience" in the team locker room, the coach has said that he would continue the post-game prayers on the 50-yard line because players could choose not to join.

"It's really incredible to see the whole entire team coming out there and joining us," Kennedy told Fox News host Steve Doocy on Thursday. "And then it spread from there to the other teams, and now everybody in the league [is doing it]. We've had the opposing team, it doesn't matter if it's a home or away game, they have joined us out on the 50 for the whole thing."

"I kind of made an agreement with my personal faith and with God that this was something that I was going to do, and I was going to give him the glory after every single game, and do it on the 50," the coach added. "I'm kind of a guy of my word, and I'm just going to go through with what I've always done."

Liberty Institute attorney Hiram Sasser, who is representing Kennedy, asserted that "the coach has a right as a citizen to be able to go out there and personally pray, and he doesn't have a duty to flee the scene if other kids happen to come along."

Kennedy said that he planned to go ahead with team prayers at Bremerton's home coming game on Saturday.

"I really don't believe I'll be fired for what I'm going to do," the coach insisted. "You know, I have a higher power that I answer to."

"My lawyers have said that I'm well within my rights."