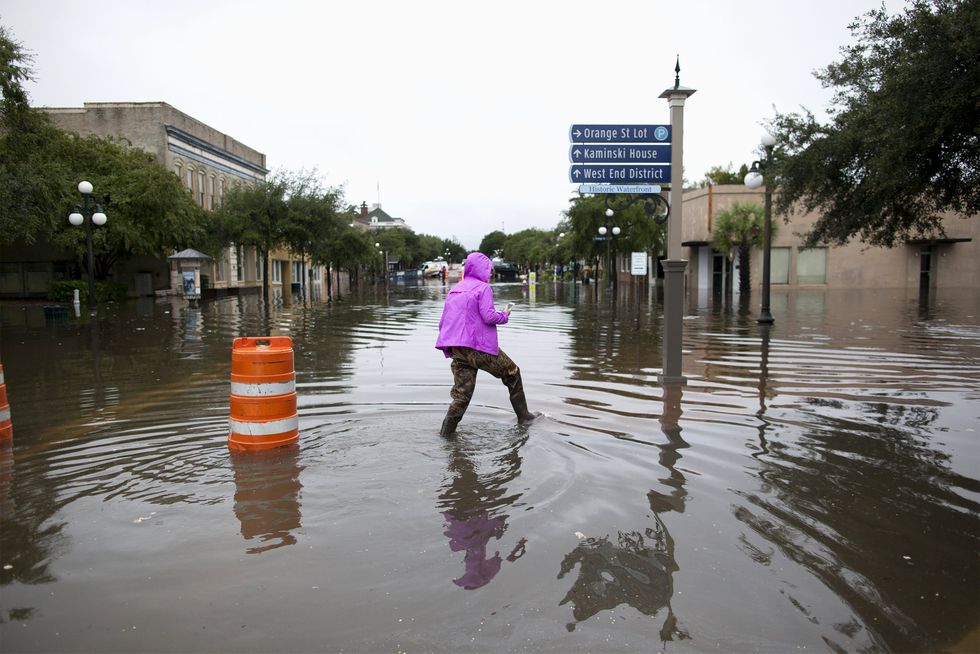 No deaths had been reported, although five traffic fatalities in North and South Carolina were blamed on a weather system that dropped more than 18 inches (45 cm) of rain in one part of South Carolina. The state climatologist forecast another 2 to 6 inches (5 to 15 cm) through Monday as the rainfall began to slacken.

South Carolina Governor Nikki Haley said parts of the state were hit with rainfall that would be expected to occur once in a thousand years, with the Congaree River running at its highest level since 1936.

"Our goal is all hands on deck. If you are in your house, stay in your house," Haley told a news conference. "This is not something to be out taking pictures of."

Overnight rains flooded highways along the South Carolina coast between Charleston and Georgetown, the National Weather Service said. Georgetown, population 9,000, was mostly under water, and the four major highways leading into it were closed.

"We have every ambulance in the county out responding to calls. People are being moved from their homes in boats," Georgetown County spokeswoman Jackie Broach said.

Inland flooding also hit the state capital, Columbia, where the Congaree rose 10 feet (3 m) in 12 hours, according to local officials.

State emergency officials urged residents not to travel due to unsafe roads and curfews were imposed in several places, including Columbia. Schools and universities in South Carolina canceled classes on Monday.

Haley said state police received 754 emergency calls from 6 p.m. on Saturday to 6 a.m. on Sunday, with almost half of them for vehicle collisions.

Tennessee and other states have dispatched water rescue teams and North Carolina is sending four National Guard helicopters, she said.

Precipitation records fell in many places. In less than four days, Charleston broke its record for the greatest monthly rainfall for October.

Counties reported more than 200 rescues from flood waters since Saturday night and more are expected, the emergency management division said in a Twitter post.

The American Red Cross opened 18 shelters across the state, the organization said on Twitter.

Amtrak, the passenger rail service, canceled its Virginia-to-Florida auto train and a passenger train from New York to Miami because of the flooding.