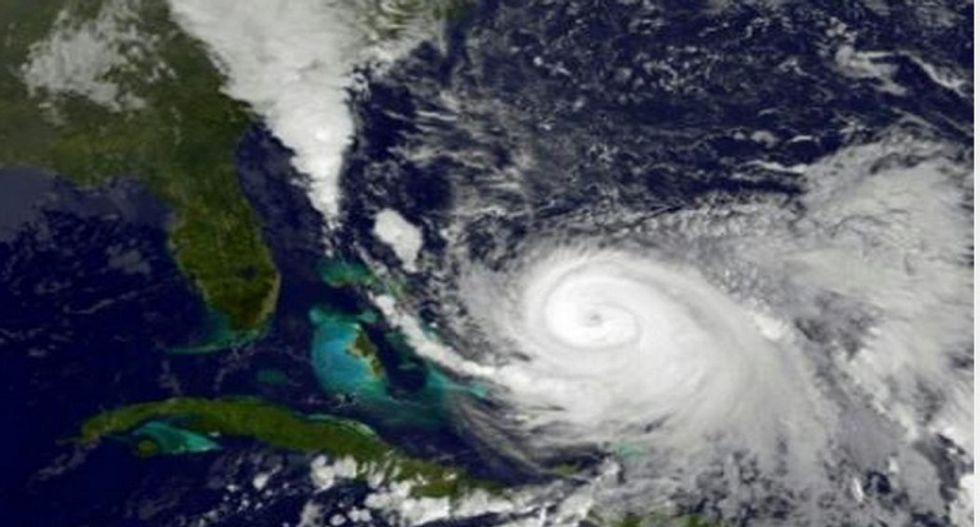 Parts of the US southeast were under water on Saturday, deluged by Hurricane Joaquin's torrential rains, with forecasters predicting historic flooding for the already waterlogged region.

Joaquin, a powerful Category Four storm, brought record-setting rain to the southeastern US after devastating parts the Bahamas and threatening to do much the same to Bermuda.

News reports have blamed Joaquin for four deaths in the United States since Thursday.

CNN reported that one person was killed by a falling tree in North Carolina. Three others died in weather-related accidents in South Carolina.

Meanwhile, the Bahamas, a low-lying archipelago, has huge areas where homes were destroyed and residents left without power or phone service after the passage of the storm.

"This is my 26th year living here, and I have never seen this before," San Salvador resident Paul Turnquest told The Nassau Guardian.

"This is the worst I've ever seen."

The Bahamas' National Emergency Management Agency was working on damage assessment, and did not immediately have casualty figures.

At least one person was killed on Long Island, Tribune242 reported, as lawmakers headed out on overflights to survey the damage.

And eleven houses were under water on Rum Cay, a resident there told the Guardian. Lawmaker V Alfred Gray said at least seven homes were totally destroyed between Snug Corner and Mason Bay, on Acklins Island.

The sprawling Bahamas islands is home to 385,000 people and visited by far more tourists every year -- about 1.3 million.

The US east coast -- which had had heavy rains in the days leading up to the arrival of Joaquin -- avoided a direct hit, but nevertheless suffered heavy rain from outer bands of the powerful, slow-moving storm.

Forecasters said Joaquin now is closing in on tiny Bermuda, population of just 66,000 people, where the potential damage could rival what was seen in the Bahamas.

The hurricane's center was some 500 miles (800 kilometers) southwest of Bermuda, and it was moving northwest at 17 miles per hour, (28 kilometers per hour).

Meanwhile, rescuers were frantically searching for the El Faro cargo vessel, with which contact was lost early Thursday as the dangerous weather system approached the Bahamas.

There were "still no signs of the vessel or any communication with them, but we are hoping for better weather conditions to be able to do more extensive searching," Coast Guard chief petty officer Ryan Doss told AFP.

En route from Florida to Puerto Rico, the 735-foot (224-meter) cargo ship was reported to be caught in the storm near Crooked Island, which is part of the Bahamas island chain.

It was from there that it sent a satellite notification stating the ship had lost propulsion and had a 15-degree list.

A total of 28 Americans and five Poles were on board, the Coast Guard said.

Rescue workers however sounded an optimistic note Saturday as the storm moved away from the Bahamas, where the government discontinued all hurricane watches and warnings for its islands.

"As the storm moves to the north, we can get further into where we believe the ship's last position was," Doss said.

Joaquin has increased its forward speed and its eye should pass west of Bermuda on Sunday, the NHC said in its latest update.

Although Joaquin is now expected to travel far to the east of the United States, "a prolonged period of elevated water levels and large waves will affect the mid-Atlantic region," the NHC said in a statement.

This will cause "significant beach and dune erosion with moderate coastal flooding likely," it added.

Emergencies were already declared in parts of the US East Coast and residents were evacuated after a powerful rainstorm lashed several states.

The weather system was thought to have been whipped up in part by Hurricane Joaquin.

Part of the city's downtown was closed to traffic, city police said on Twitter, while further north in Myrtle Beach, torrents of rain were causing flooding.

AccuWeather predicted rainfall of one to two inches (2.5 to five centimeters) per hour in some areas of the Carolinas.

South Carolina Governor Nikki Haley told drivers to stay off the roads and warned power outages were possible during the weekend.

"We are expecting historic levels of rainfall this weekend," she said in a statement.

At least four storm-related fatalities were reported in the United States.

Joaquin is the third hurricane of the 2015 Atlantic season, which began in June and ends in November. Peak activity usually occurs in September.

The Koch network, headed by billionaire oil and gas tycoon Charles Koch, is mobilizing its vast resources in an effort to convince holdout Sen. Kyrsten Sinema to tank the Democratic Party's new reconciliation package ahead of a possible vote this week.

Since the deal was announced last week, Sinema (D-Ariz.)—a frequent obstructionist of her own party's agenda—has been completely silent about the bill, a hodgepodge of renewable energy investments, tax provisions, oil and gas industry giveaways, drug price reforms, and other measures. The bill was negotiated principally by Sen. Joe Manchin (D-W.Va.), another right-wing Democrat.

Sheriff’s deputies in Genesee County spotted a gray Nissan Sentra driving through Leroy, a small town 30 minutes outside of Rochester, NY, in March. After the deputies observed the vehicle fail to signal before making a turn and making an evasive maneuver, the deputies initiated a traffic stop.

The driver was Michael Alan Jones, a 24-year-old North Carolina man, and his passenger was another man identified in court documents only as “PK.” What the deputies found in the Sentra was something akin to a mobile arsenal: “several knives, military surplus gear, and two compound bows.” Bolt-cutters protruded from a backpack on the floorboards of the passenger seat, where PK was sitting. Inside, the deputies found pry bars and gloves, leading them to believe they were looking at burglary tools. They also found ammunition and pepper spray in the vehicle.

The criminal case against Donald Trump is "both comprehensive and compelling," according to a conservative columnist, but it remains uncertain whether he will ever be prosecuted for his role in the Jan. 6 insurrection.

A federal judge found the former president had "more likely than not" broke the law in his attempt to remain power, and the House select committee has revealed strong evidence for prosecution, but The Bulwark's Charlie Sykes said the decision to charge Trump carried immense political and historical weight.