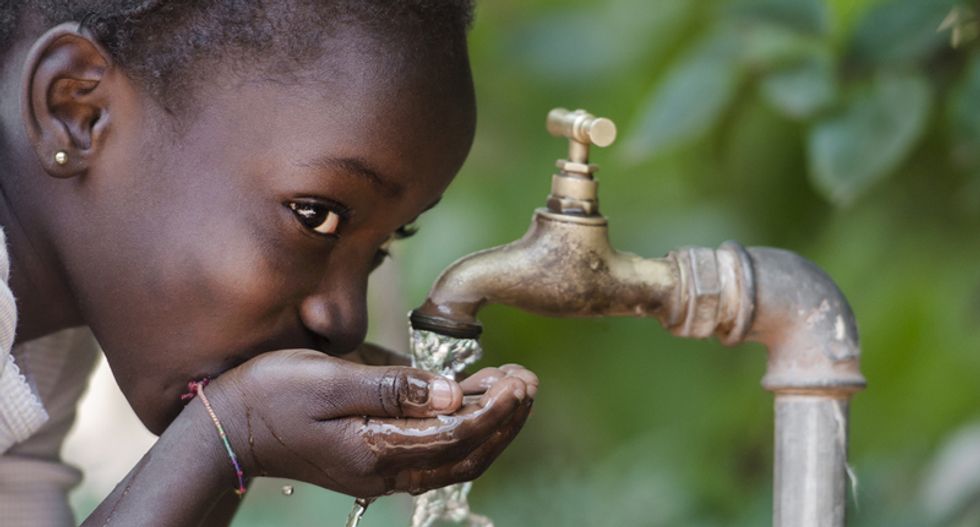 When Lee-Anne Walters learned in March that her son’s immune system was compromised after being exposed to lead in the city of Flint’s water supply, she did what any parent would likely do: break down and cry.

“Shocked, angry … I was hysterical,” Walters told the Guardian. Barely able to speak, the 37-year-old called her friend Melissa Mays.

“I just couldn’t believe that we were paying to poison our kids,” Walters said.

A spate of kids are experiencing elevated blood-lead levels in Flint, and some drinking water lead levels are so high they are defined as hazardous waste, according to several local studies.

Residents also pay some of the highest water rates in the US, in the community known for its economic decline.

After months of resisting complaints about the water, and even a press conference by local doctors warning of potential effects, officials relented this week, declaring a public health emergency.

The spike in lead occurred last spring after Flint changed the source of its drinking water. Conducted by a pediatrician with Hurley Medical Center, the newest study examined the lead levels of hundreds of children, comparing blood tests taken before and after April 2014, when Flint stopped using Detroit water and started drawing water from the Flint River as a temporary cost-saving measure.

Ever since the switch, according to the Hurley study, the number of children in the city with elevated blood levels increased from 2.1% to 4%. In some areas, the number increased as high as 6.3%.

The study found no significant change over the same period in lead levels of children from surrounding Genesee County, which continued to purchase water from Detroit instead.

The Hurley study only compounded results from prior independent testing conducted by researchers from Virginia Tech, a group of citizen volunteers, and the American Civil Liberties Union of Michigan.

As a result, according to the study, the city’s water is wholly unsafe.

“We’ve been screaming [about] this since February and people, they’ve just blocked us out,” said Mays, who is 37 and works in radio marketing.

According to Virginia Tech researchers, water from the Flint River is far more corrosive than Detroit’s supply, and it eats away at lead from service lines, before flowing into homes across the city of 100,000.

For weeks, city and state officials hadn’t embraced the findings with open arms and insisted the city’s water was safe to drink.

But following the release of the Hurley study last week, the city promptly issued a lead advisory, telling residents to flush their pipes and install water filters. In addition, the city said, it is now feverishly working to implement a corrosion control plan to reduce levels of lead.

Why the Michigan department of environmental quality didn’t ensure a plan was in place when Flint switched sources remains a mystery, said Marc Edwards, a professor at Virginia Tech who was involved the Flint Water Study.

“Flint is the only city in the United States that does not have a plan to control lead corrosion,” said Edwards. “They haven’t had one since April of last year. It’s unconscionable what happened here.”

The city’s water woes come amid a troublesome moment in Flint’s history: Throttled by financial uncertainty, Flint was placed into state receivership in 2011, when Republican governor Rick Snyder appointed an emergency manager with vast power to oversee the city’s day-to-day operations. Flint also ranks high on the list of violent US cities, a standing that’s exacerbated by a continually fleeing tax base.

It’s against that backdrop that Flint’s water supply became a source of trouble, following then emergency manager Ed Kurtz’s decision, in April 2014, to decline a short-term deal with Detroit to continue receiving water from the city, and instead sign a contract to join a new system.

Immediately, problems arose. Residents complained about water that was suddenly cloudy, odorous and tasted rancid. Test results showed levels of fecal coliform bacteria and, eventually, elevated levels of total trihalomethanes, chemical compounds which, according to the Environmental Protection Agency, can lead to liver or kidney issues for an individual who consumes water with high levels over a long period of time.

As the problems continued to fester, residents started to organize and rally for clean, affordable water. Flint residents pay an average $140 monthly bill for water, an analysis by the Flint Journal found.

During a meeting in January, Walters said she approached the city’s emergency manager to show off a collection of water bottles that contained her discolored supply.

“He told me that I was a liar and stupid,” Walters said. Furious, she handed her bottles to Mays, whom she’d never talked to before. Mays took a step backward along with Walters’ daughter, who said: “My mom’s gonna hit him.”

“So at that point me and her started talking,” Mays said, as the pair laughed about the incident inside Walter’s home this week. “We talk to each other more than we do our families.”

Almost immediately after Flint switched to the river, Walters said her household’s water was “coming in brown”. Whenever her four-year-old son Gavin would come in contact with the water, she said, “he would break out in this scaly, gross rash”.

It wasn’t just Gavin, however.

Soon, the family started losing their hair. The mother of four also got a rash on her right leg; despite her use of multiple creams and antibiotics, it hasn’t gone away.

Then, in February, she was informed by her pediatric doctor that Gavin had been diagnosed with lead poisoning. Low-level exposure could produce long-term health effects, including behavioral and learning disabilities. What’s more, there is no safe level of lead exposure, according to the Centers for Disease Control and Prevention.

Startled by the test result, Walters eventually connected with an EPA employee in the agency’s midwest office, who introduced her to Edwards.

The 51-year-old scientist explained to Walters how to conduct a sampling of the fluid coming out of her faucet, the results of which “stunned” the Virginia Tech researchers: the average amount of lead in Walters’ water was more than 2,400 parts per billion (ppb), substantially higher than levels deemed safe by the EPA. The highest test came back at 13,200 ppb; at 5,000 ppb, water is considered hazardous waste.

“The lead poisoning was a game changer,” Walters said.

Months later, in August, Edwards was on the ground with a group of seven research scientists and nine graduate students, alongside the American Civil Liberties Union (ACLU) and a “small army” assembled by Mays and Walters’ citizen group Water You Fighting For?

Over two weeks, the group canvassed the city, handing out 300 test kits for households; more than 270 were returned to sample, an “unprecedented” effort, said Edwards, a 2007 MacArthur “genius” grant winner.

Edwards said the level of effort by the citizens to ensure homes were tested cannot be overstated.

Some spent their anniversaries and birthdays to stay involved.

“We worked our butts off,” said Mays.

But once their work was complete, the Snyder administration immediately disputed their findings.

‘We’ve done what we can’

On 24 September, Brad Wurfel, a spokesperson for the state department of environmental quality, told the Detroit Free Press the state doesn’t take the issue lightly, but that it stands by its testing and its data, which showed a downward trend of Flint children with elevated blood-lead levels.

“We’re confident with what we’ve done, but we know there are concerns,” Wurfel told the Free Press . In fact, the state’s data actually confirmed the findings in the Hurley report, according to an analysis by the newspaper. (Wurfel did not respond to requests for comment by the Guardian.)

But last week, it emerged that Snyder helped an anonymous donor distribute water filters to Flint residents, even as his office sought to downplay concerns. On Wednesday, the governor conceded the situation may be far worse than his office initially portrayed.

“It appears that lead levels could be higher or have increased,” Snyder told reporters. An estimated 5,000 residents are expected to receive water filters, following an influx of $100,000 in donations from public and private sources.

“[It] will not necessarily have the effect that some expect,” he said. “Flint has long-term challenges with water infrastructure that need to be addressed.”

While that may be the case, Edwards said a return to Detroit water would reduce Flint’s lead levels within 30 days.

“Flint water is pouring 20 times more lead into the water than Detroit water,” he said. “It’s plain as day; you can see it with your eyes.”

That’s why the coalition of groups behind the Flint Water Study filed a petition with the EPA on Thursday, calling for the agency to take action to secure lead-free water in the city.

“The EPA, along with city officials, must exercise their full authority to guarantee that the people of Flint are protected from the hazardous water now flowing into their homes,” said Kary L Moss, ACLU of Michigan executive director, in a statement.

On Friday, Snyder relented and said in a conference call with reporters that discussions are ongoing to consider reconnecting Flint with Detroit’s water system. A decision is expected in the coming week.

Officials announced plans to immediately test water at local schools, expand testing of residents at no costs, and expedite corrosion controls in the Flint system to prevent additional leaching of lead. An additional $1m in state funding will be appropriated to allow 4,000 residents to purchase water filters.

The potential success for Walters comes as she moves her family to Virginia.

But the mother and activist said she already has a meeting scheduled with officials in Washington DC to talk about Flint.

“Just because I’m not physically going to be here, I’m still going to be involved,” she said. “I’m not giving up what we’ve started.”