'It's capitalism at its worst': Nazi gas chamber valve and slave collar among items hawked at Florida auction 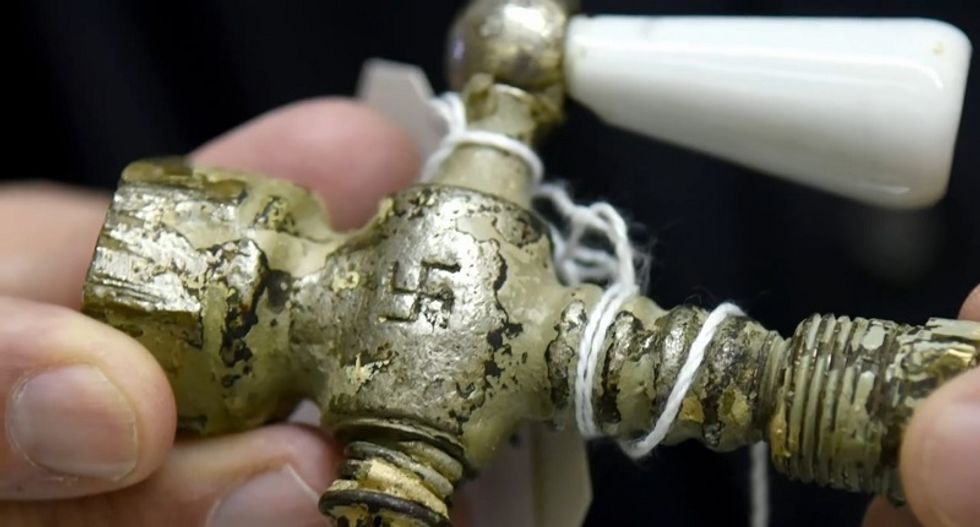 Klan hoods, a slave collar, a gas valve from a Nazi death chamber. These are items from atrocities that most would like to leave in the annals of history.

But auctioneers in South Florida have dug up items from some of the worst that humanity can offer and are selling them for profit, the Sun Sentinel reports. Reporter Michael Mayo recounts walking through a warehouse full of concentration camp badges, Nazi flags, discriminatory signs from the Jim Crow South and letters written by serial killers, all part of the "The Ultimate Evil Auction."

"From a moral standpoint, I didn't know whether it was right or wrong," Scott Grasso, president of J. Sugarman Auction Corp, told Mayo. "But these items have a historical significance to them, and you can't change the course of history. ...So far, there's been more interest than objection to it."

In a video report by the Sentinel, Grasso says some of the worst items include a gas valve with a Nazi insignia on it that he was told was used to kill concentration camp prisoners, and a slave collar worn by an African-American slave before the Civil War.

"I'm extraordinarily disturbed and distressed," Rositta Kenigsberg, president of the Holocaust Documentation and Education Center, told Mayo. "I've never seen anything quite like this in our local community."

According to their website, you can bid on items like a KKK brass spittoon, a hand-written letter from Manson follower Lynette "Squeaky" Fromme and other disturbing items starting at $10.

Mayo guessed that more people weren't distressed about the auction because it's not well known.

"I'm extraordinarily disturbed and distressed," Rositta Kenigsberg, president of the Holocaust Documentation and Education Center, told Mayo. "I've never seen anything quite like this in our local community."

The auction company sells a wide variety of items from home decor to jewelry to clothes and accessories, according to their website. This auction is the first of its kind for them. Larger outlets like eBay and Amazon have bans against offensive objects being sold, according to the Sentinel.

Some worried about who would be buying such objects.

"If he's doing it, that means there's a market for it," Kenigsberg, a daughter of a Holocaust survivor, told Mayo. "Who's buying this stuff and why?"

The auction company sent the Sentinel a press release saying it "in no way intended to condone or glorify the heinous criminal acts of those involved." Grasso also said he reached out to anti-hate organizations in the area to see if any wanted a portion of profits from the auction, but did not hear back.

Mayo, who is Jewish, called it "capitalism at its worst."

Watch the video report, via the Sun Sentinel, here: