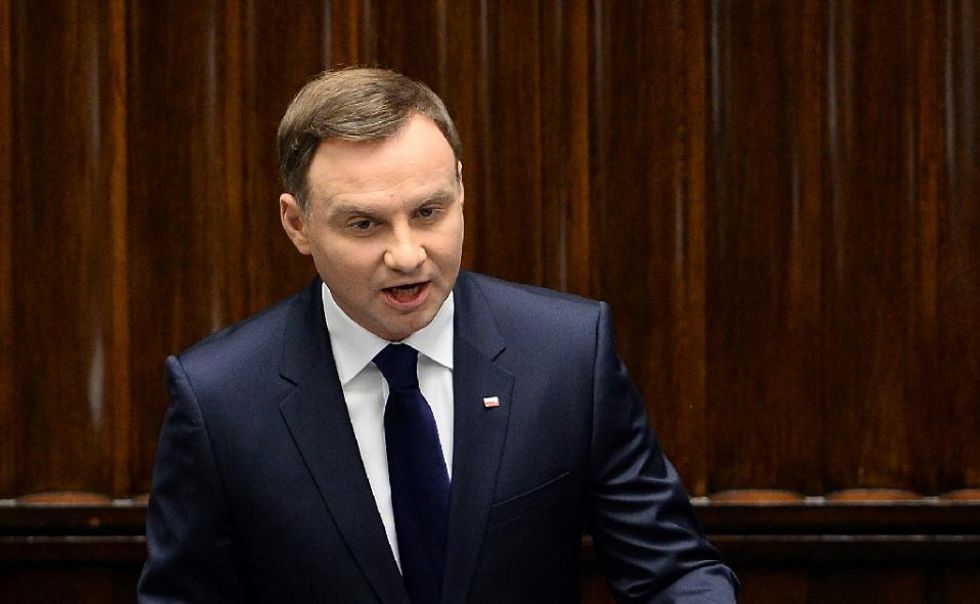 Image: Polish President Andrzej Duda, pictured on August 6, 2015, said if the government was ready to accept migrants it should take measures "to ensure that Poles are well protected against epidemiological risks" (AFP Photo/Janek Skarzynski)

Poland's conservative President Andrzej Duda on Sunday said his government should take steps to protect its citizens if it took in migrants as they could bring "possible epidemics".

The statements are potentially embarrassing for former Polish premier Donald Tusk, who is now the EU president, and who has criticised the growing trend among European nations to erect new barriers to keep out refugees from Syria and elsewhere.

Duda said if the government was ready to accept migrants it should take measures "to ensure that Poles are well protected against epidemiological risks".

"The security of citizens is the most important question... financial and physical security as much as health," Duda told the TVN24 channel.

His comments echo those of Jaroslaw Kaczynski, leader of the populist Law and Justice party of which Duda is a member.

The party is widely tipped to win legislative elections due on October 25.

Kaczynski had spoken of "cholera in the Greek islands" and "dysentery in Vienna" and accused migrants of "bringing in all kinds of parasites which are not dangerous in their own countries but which could prove dangerous for the local populations" in Europe.

Speaking outside a refugee centre, Kaczynski had also asked the centrist government of Prime Minister Ewa Kopacz to clearly spell out how it planned to "protect" Polish citizens.

These comments were widely criticised by both centrist leaders and the media which likened them to hate speech and said they were reminiscent of Nazi propaganda. The Nazis had accused Jews of carrying typhus.

Poland had long been reluctant to take in migrants but finally agreed to accept about 5,000 of the 120,000 people to be shared out between the 28-member EU, up from an initial 2,000.

More than 630,000 people fleeing war and misery in the Middle East and Africa have landed on Europe's shores this year.