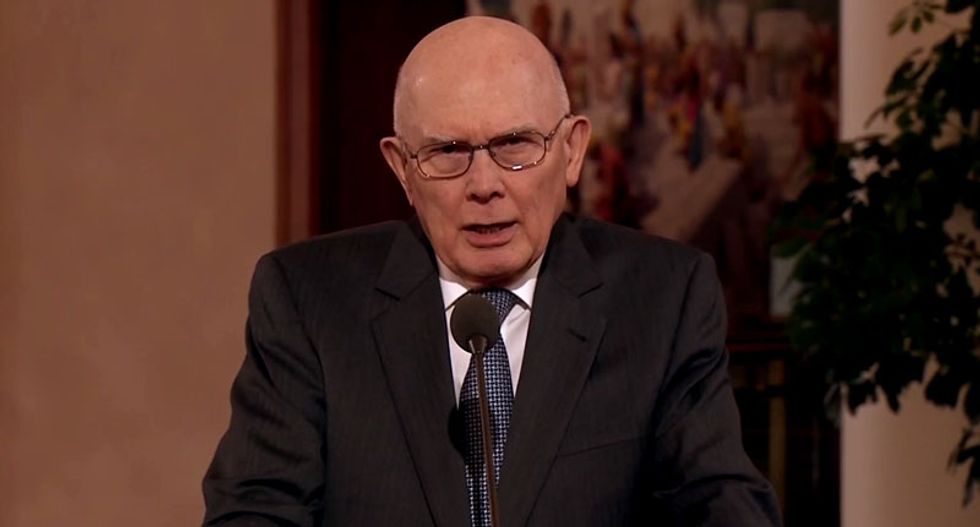 A Mormon elder has urged faith leaders and attorneys to seek a middle ground on gay marriage and religious liberties, specifically criticizing the actions of a Kentucky clerk who refused to issue marriage licenses to same-sex couples.

Church of Jesus Christ of Latter Day Saints elder Dallin H Oaks made the comments in a closed-door interfaith meeting of attorneys and clergy in Sacramento, California. His speech was seen as an attempt to further moderate the Mormon church’s position on homosexuality, which it refers to as “same-gendered attraction”.

“There should be no adversariness between believers and non-believers, and there should be no belligerence between religion and government,” said Oaks . “Believers and religious organizations should recognize this, and refrain from labelling governments and laws and officials as if they were inevitable enemies.”

He went on to reference a “county clerk”, later confirmed to mean Kim Davis. The clerk refused to issue marriage licenses in Rowan County, Kentucky after the US supreme court legalized gay marriage across the country.

“All government officers should exercise their civil authority according to the principles and within the limits of civil government. A county clerk’s recent invoking of religious reasons to justify refusal by her office and staff to issue marriage licenses to same-gender couples violates this principle,” Oaks said.

Davis’s practices have remained controversial among religious leaders since she began her protest following the landmark US Supreme Court decision in June . She met Pope Francis during his journey to the US. At the time, Davis said the meeting “ kind of validates everything ”, but Vatican leaders quickly distanced themselves from Davis , calling her one of dozens of people invited to meet Pope Francis.

Oaks’ speech, titled The Boundary between Church and State, focused on the separation of church and state as a protection for religious believers, rather than an obstacle. Oaks is a member of the church’s Quorum of Twelve Apostles, was once a justice of the state’s supreme court, and served as president of Brigham Young University (his alma mater).

As is the case with the Roman Catholic church, recent statements by Mormon elders have been seen as small steps toward a moderate approach to homosexuality.

Elders have increasingly made statements leaning toward acceptance of same-sex relationships, though not always without controversy . Leaders told members they should lobby for the anti-gay marriage Proposition 9 in 2008, which was later found to be unconstitutional. Official church teaching remains unchanged – that marriage is the union of one man and one woman.