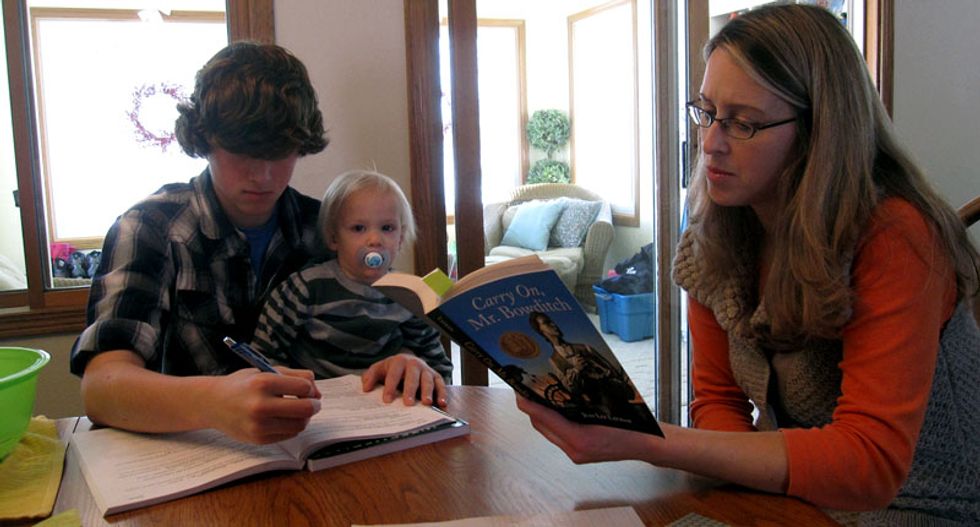 An estimated two million children are being homeschooled in the United States. Scholars studying homeschooling often talk about the academic achievement of homeschoolers or their social skills.

But, as important as those things are, they are not the main concern of many families who choose homeschooling. According to the surveys conducted by the National Center for Education Statistics, 91% of homeschooling parents are more concerned about the environment of schools and want to offer a religious (64%) and/or moral (77%) alternative.

Smaller-scale studies of parental attitudes have found the same thing, from the conservative fathers who try to form a moral cocoon around their children, to African-American families who want to foster a sense of racial pride in their children, to “quiverfull” families trying to have enough children to Christianize the United States by demographic transformation.

Does homeschooling help parents achieve what they want?

Let’s first look at the broader findings about the success or failure of passing on religious and political beliefs to children.

Demographers have consistently shown that the United States is gradually growing more secular. This secularization is a generational phenomenon – that is, each generation is becoming less religious than the one preceding it.

This is consistent with the finding that children of intensely polarized parents often embrace their parents’ views when they are young but go on to reject them as they enter young adulthood. At the same time, however, many adult children continue to identify with the religion in which they were raised, especially if they had a strong bond with a devout father.

Given these trends, many conservative religious families have turned to homeschooling as a way to better ensure that their children will grow up to be like them.

What do the data show?

Baylor University sociologist Jeremy E Uecker found through his analysis of data from the massive National Study of Youth and Religion that the key factor in transferring religious commitment was the level of religiosity of the parents and not the sort of schooling children received.

On average, homeschooled young adults were no more religious than demographically similar young people who attended public or private schools.

Another large-scale study, the Cardus Education Survey, conducted in 2011, likewise found that parental religious devotion is the most important factor for young adult religious commitment.

Cardus researchers David Sikkink and Sarah Skiles’ analysis, based on a second round of the Cardus Education Survey conducted in 2014, found that while adults raised in a Christian homeschool context were a bit more likely to hold conservative theological views, they were less likely to have an active religious life or to be deeply involved in a religious congregation than demographically equivalent public and privately schooled young adults.

Indiana University professor Robert Kunzman, in his careful study of six homeschooling families, found that, at least for his sample, homeschooled children tended to become more tolerant and less dogmatic than their parents as they grew up.

He found that the more authoritarian the parenting style, the more pronounced the liberalization tended to be.

Albert Cheng, a doctoral student at the University of Arkansas, found in his study of students at a Christian university that homeschoolers were a bit more tolerant of other views than graduates of private and public schools attending the same university.

The type of schooling did not really make a lot of difference, especially not the sort of transformative difference many parents who choose it hope for.

If anything, homeschooled children, especially those raised in very conservative homes, tend to liberalize over time, especially if they went on to college.

Beware of the anecdote

These studies are among the most compelling on the question of the religious outcomes of homeschooling. Unfortunately, however, the best studies are not those that are most widely circulated on the internet.

Readers need to be aware that there are more partisan studies that exist.

On the other hand, a poorly designed survey by a critic of unregulated homeschooling found that most former conservative Christian homeschoolers had liberalized significantly, and a substantial minority had jettisoned their families’ religious and political views completely.

So what does it all mean? Anecdotes and biased studies aside, it seems from this emerging body of work that homeschooling itself will not automatically produce adults who share the conservative political, religious and moral beliefs of their parents.

The data also suggest that family climate, especially faithful religious devotion by both parents, delivered in a context of loving nurture, is far more important than where a child goes to school.