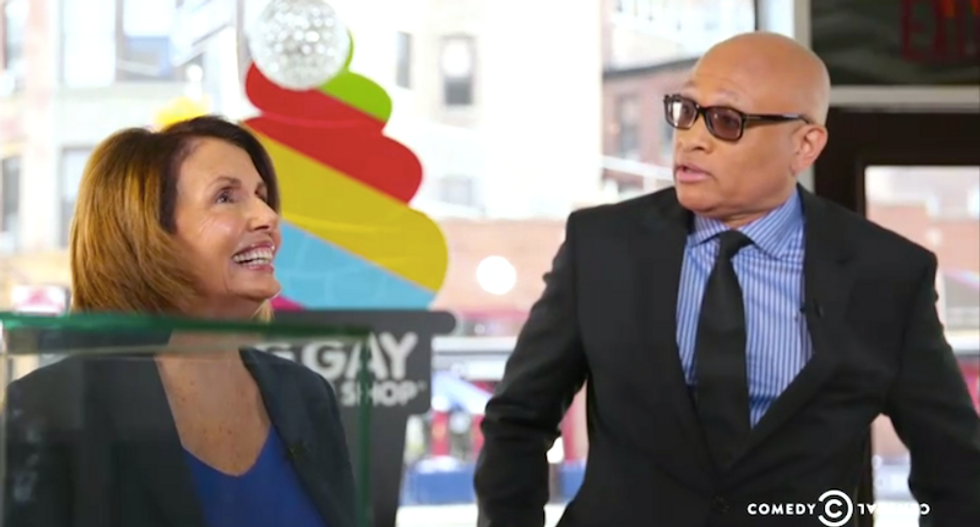 Larry Wilmore took Nancy Pelosi out for ice cream, and the House Minority Leader dished on the presidential candidates from both parties.

The "Nightly Show" host asked Pelosi about the sudden resignation of House Speaker John Boehner, and she said she was surprised.

Pelosi said she was impressed by the Democratic presidential candidates.

"Any one of them would be a good president, but in this field, Hillary Clinton is the person who will be our nominee," she said.

Wilmore asked if she would be satisfied if the first woman president were a Republican, rather than a Democrat.

"Or would you still be, like, okay girl, I don't agree with you, but you know -- we still got it," he joked, as Pelosi watched in mute horror.

Wilmore asked Pelosi who she thought was the "least crazy" GOP candidate -- or even someone with whom she might enjoy a Big Gay Ice Cream.

"That's a hard contest," she said. "I would name several, but I don't want to get them in trouble in their caucus."

Wilmore reminded the lawmaker that New Jersey Gov. Chris Christie had simply "touched a black president, so now he can't be president" -- although Pelosi pointed out that "he has other problems."

Pelosi dismissed Donald Trump's presidential chances, and she brushed off almost all the other Republican candidates as unserious charlatans.

"It will never happen," she said. "He's not gong to be president of the United States, no -- and he knows that. Of course, he knows. I think this is about book sales and lecture fees, I mean for all of them. Maybe not for George -- what's his name? -- Jeb Bush."

Pelosi said she had one regret from her time as House Speaker.

"One regret," she said. "We really do have to address the issue of gun safety in our country."

Pelosi recalled playing with a group of children at a child care center in her district when a balloon popped, and one 4-year-old urged the others to drop, thinking it was gunfire.

But she said two lobbying groups, the National Rifle Association and the Gun Owners of America, had grown so powerful that they could block any attempts to address gun violence.

"Nobody wants to take away their guns, but what we don't want is for people who shouldn't have a gun to have a gun," Pelosi said. "What's more important, political survival or the survival of children in Newtown or college students in Oregon?"