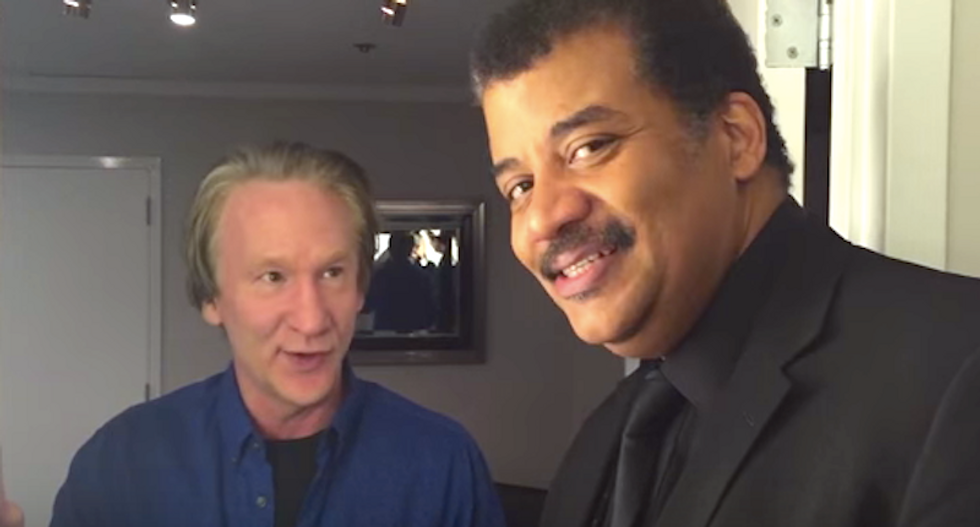 Neil deGrasse Tyson says humans should learn to master our own planet before venturing out to explore new worlds.

The celebrity astrophysicist chatted with Bill Maher after the comedian and talk show host appeared on an episode of "Star Talk," and the pair speculated about ways humanity could avoid the devastating effects of climate change.

"You know what I want to happen?" Tyson said. "I think it's not about finding another planet. I think it's about being masters of geo-engineering."

"Think about it: We run away from volcanos, we know how to tap a keg -- let's tap the volcano, take the pressure out so it doesn't explode, use the thermal energy to drive the power needs of a city," he continued. "We run away from hurricanes, we're not there yet. Imagine if we controlled the energy of the earth -- oh, my gosh. Then we can control where it rains (and) how much it rains. We're just these scurrying, scared things."

Maher agreed that saving Earth was more important -- and possibly more practical -- than exploring other planets.

"We're so far away from getting to anywhere in the universe," Maher said. "I remember (George W.) Bush used to talk about how we have to put a base on the moon so we can get to Mars. I understood there was (less) gravity on the moon, so it'd be easier to launch, but who wants to live on Mars?"

Maher begged for another season of "Cosmos," and Tyson assured him that he and his producers were working on that but didn't have any definite plans yet.

"I always say to people, watch that show and you'll understand that, like, 12 to 20 people in the world thought of everything great that the other billions just glom onto," Maher said.

Tyson agreed that "whole chunks of civilization" were developed by those pioneering scientists.

"Without that very top (fraction of) one percent who thought of everything, the rest of us would be wiping our ass with bark," Maher joked.