Noah defends Trump: Bush claiming we were safe on 9/11 is like saying ‘I’m blackout drunk and cool to drive’ 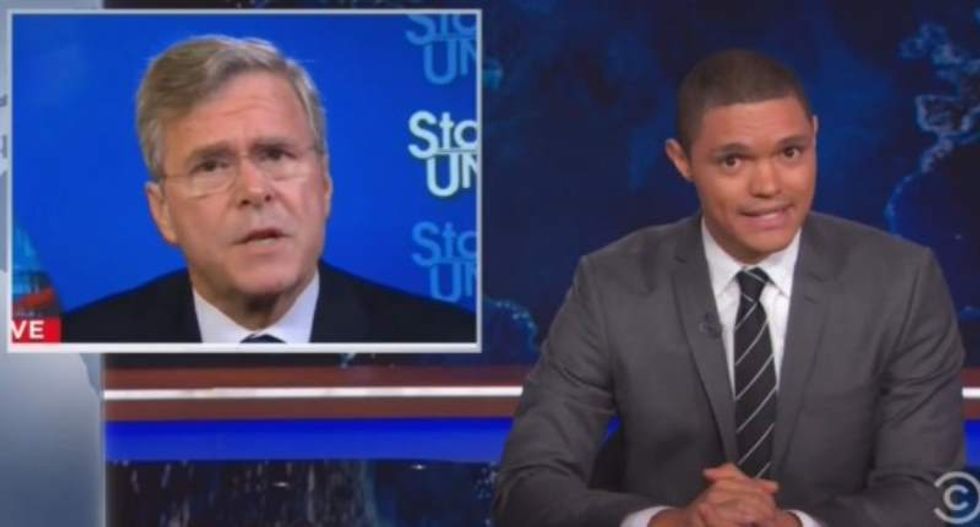 Daily Show host Trevor Noah said on Monday that Jeb Bush is now deeply on the defensive after trying to respond to Donald Trump's barbs regarding the 9/11 attacks and Bush's brother, former President George W. Bush.

"What's happened here is very simple: Jeb's family was attacked, and he responded quickly and decisively. But then he found that the situation was more complicated than expected, landing him in a quagmire of hard questions," Noah said. "If he pulls out of the decision, he leaves his name vulnerable to more attacks. But if he stays the course, he winds up destabilizing the party's position on Iraq and Benghazi. I'm just saying, it's an unwinnable situation. So maybe he shouldn't have jumped in so quickly in the first place."

Noah showed footage of the former Florida governor struggling to respond on Sunday when CNN's Jake Tapper asked how he could hold President Barack Obama and then-Secretary of State Hillary Clinton responsible for the Benghazi attacks while insisting that his brother "kept us safe," a phrase Jeb Bush has used both in person and online.

"That doesn't really make sense, though," Noah said. "'We were attacked,' and 'my brother kept us safe'? Do you know how that sounds? It's not really correct. It's like saying, 'I'm blackout drunk, and totally cool to drive.' 'I lost your children, and this field trip was a success.' It's one or the other. It can't be both."

It was Trump, Noah said, who sparked the latest round of criticism against Bush by pointing out that his brother was president during the 9/11 attack, which surprised the host.

"I'm sorry to say this," Noah said. "But strictly, within the factual confines of that sentence, Donald Trump is ... Donald Trump is ... he's not wrong. Which is worrying, because if he's not wrong about this, then what other things is Trump not wrong about? Maybe he is best at military. Maybe multiple bankruptcies doesn't mean he's a bad businessman. The possibilities are endless."