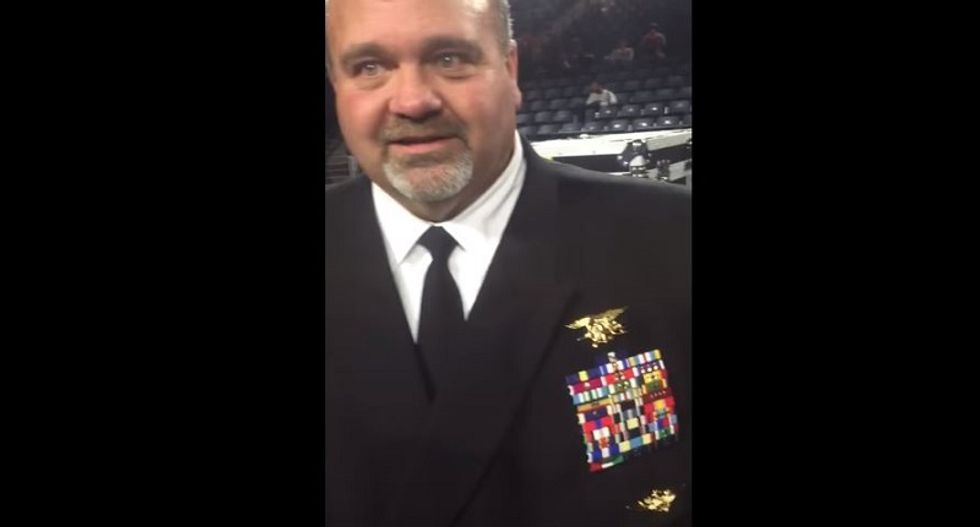 A U.S. Army veteran noticed a curious thing at a recent convocation event at Jerry Falwell's Liberty University. A graying man was wearing military dress uniform and badges that indicate what seemed like an impossible accumulation of achievements and commendations.

The man identified himself as Mark Joston, the Friendly Atheist reports. Joston had insignia on his uniform identifying him as a Navy SEAL with four purple hearts, an Afghanistan and Iraq veteran, and rear admiral for the CIA's special ops.

The man was none of those things, nor was his name Mark Joston. He was Pastor George Hunley of Louisa, Virginia, who earlier this year was arrested for falsely reporting to police he was robbed and shot by a black man.

Veterans were quick to detect inconsistencies in Hunley's story.

"This guy made a big mistake by putting on that Navy Cross if he did not earn it because there are only a dozen or so who have earned the distinguished Navy Cross during the war on terror," writes Michael Swaney at Popular Military. "There is no Mark Joston or “Josten” to be found on any list of Navy Cross recipients. However, there are three unidentified Navy SEALS who earned the Navy Cross during the global war on terrorism. So we cross referenced his name with the Navy Silver Star recipients and there is also no Mark Joston or Josten."

After Swaney wrote about Joston, his readers pointed out a Raw Story post from February in which Hunley led police on a fabricated story that he'd been robbed and shot by an interracial couple he'd pulled over to try and assist on the road. His story fell apart at that time because police couldn't find any evidence Hunley had been shot, and also found his wallet and checkbook, which he claimed had been taken in the incident.

Watch the video, as posted to YouTube by Nizzland456, here: