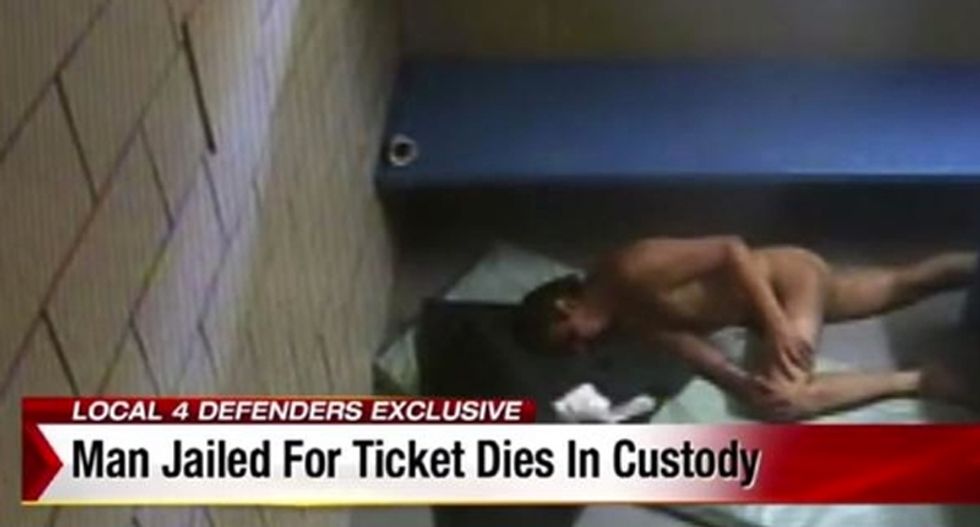 Friends and family of a Michigan man who died naked in a jail cell of drug withdrawal while serving a sentence for a traffic ticket staged a rally on Saturday, as the FBI continued to investigate the incident. Local authorities said deputies had done nothing wrong in the case.

David Stojcevski, 32, was undergoing drug addiction treatment when Macomb County sheriff’s deputies arrested him in June 2014, for failing to pay a $772 ticket for careless driving. Unable to pay, he was locked up at the county jail for a 30-day sentence.

According to a federal lawsuit filed by his brother, Vladimir, problems arose almost immediately. Stojcevski was placed in a jail cell, the suit says, even though a nurse observed that he showed “obvious physical signs of drug abuse” and recommended placing him a drug detox unit.

Stocjevski told jail officials he took methadone as part of a drug treatment program, along with klonopin and oxycodone for anxiety and pain relief, the lawsuit said.

Within 17 days, as he experienced noticeable withdrawal symptoms, Stojcevski’s weight plummeted by 45lbs to 50lbs. In a jailhouse video released by WDIV, a local NBC affiliate , Stocjevski can be seen writhing in pain for hours.

The disturbing footage attracted national attention. On Saturday, friends and family said it showed how the criminal justice system can neglect prisoners.

“I don’t even think he should’ve been put in jail for a driving ticket,” said Brandon Balakier, 31. “I mean, there’s other people who do way worse things that are out the next day.”

Stojcevski’s mother, Dafinka, said her son was a gentle soul with a “big heart”.

“He didn’t deserve to die in jail,” she said.

A week after he was admitted to jail, the 70-page complaint says, Stojcevski began “hallucinating, talking to people that are not there, and also stated that he died earlier today”.

At that point he was transferred to a mental health unit, where he was monitored by video at all times. During that period, the county failed to provide access to his prescriptions, the lawsuit claims.

The following 240 hours of Stojcevski’s life were captured on tape. His “mental and medical health deteriorated so dramatically” amid the drastic weight loss, the lawsuit filed by his brother says, “that [the county] knew or should have known [it] was compromising David’s ability to survive”.

According to a county medical examiner’s autopsy, Stojcevski died of acute withdrawal from chronic benzodiazepine, methadone and opiate medications.

County officials defended the actions of the sheriff’s deputies involved in the case, saying they have been unfairly portrayed in the media and that Stojcevski was treated properly and according to procedure.

“We’ve dissected the video in a timeline down to a minute,” said John Schapka, corporation counsel for Macomb County . “Trust me, we don’t throw people in jail cells naked and don’t feed them.”

Responding to complaints that jail officials were inattentive, Schapka told the Guardian that in the mental health ward, deputies are told not to cause any “needless physical confrontations”.

“The idea there is not to trigger escalation,” Schapka said. “We don’t escalate situations. That just leads to needless excess force claims, needless confrontations.”

Schapka denied that medical personnel failed to examine Stojcevski on a regular basis.

“He was seen by medical every day he’s there,” he said.

Earlier this month, Macomb County sheriff Anthony Wickersham , who declined to comment to the Guardian, spoke at a press conference regarding the initial story on the case by local NBC affiliate WDIV.

“It was unwarranted, not factual, and may have, in my opinion, been published with reckless disregard,” said Wickersham, who is named as a defendant in the federal lawsuit.

The sheriff also said he believed his department deserved an apology from Stojcevski’s attorneys, for pushing the case in the media.

Schapka said the case should serve as example of how jails have replaced mental health facilities as a last line of care.

“In general, when the state started closing all of the mental health facilities … that leaves literally jails and hospitals … as the last place for individuals with pyscho-emotional difficulties,” he said.

Friends and family of Stojcevski said that should not excuse the way he was treated over a simple traffic ticket.

“This is not a criminal, man,” said Jason Howard, a friend. “This could be you or I.”

The family’s lawsuit claims the county’s treatment of Stojcevski violated his constitutional rights, amounted to “gross negligence” and intentionally inflicted emotional distress. It seeks more than $75,000 in damages and asks for a jury trial.

Schapka said he believed the county would prevail in the suit but declined to elaborate, citing “privileged information”. A judge will consider the county’s request to dismiss the lawsuit on Wednesday.

The FBI has launched a review of the case, which Sheriff Wickersham has said he welcomed.

“I promote transparency within my office and look forward to the findings of the FBI,” Wickersham said in a statement earlier this month.

“Any death that occurs in the Macomb County jail is tragic,” the statement added, “not only to the family of the deceased but to the men and women of the sheriff’s office who oversee the care and custody of our 1,200 inmates daily.”

Irrespective of the outcome, Dafinka Stojcevski and her family will continue to grieve their loss.