Revealed: Anti-abortion protester is a sex offender who raped a family member at knifepoint 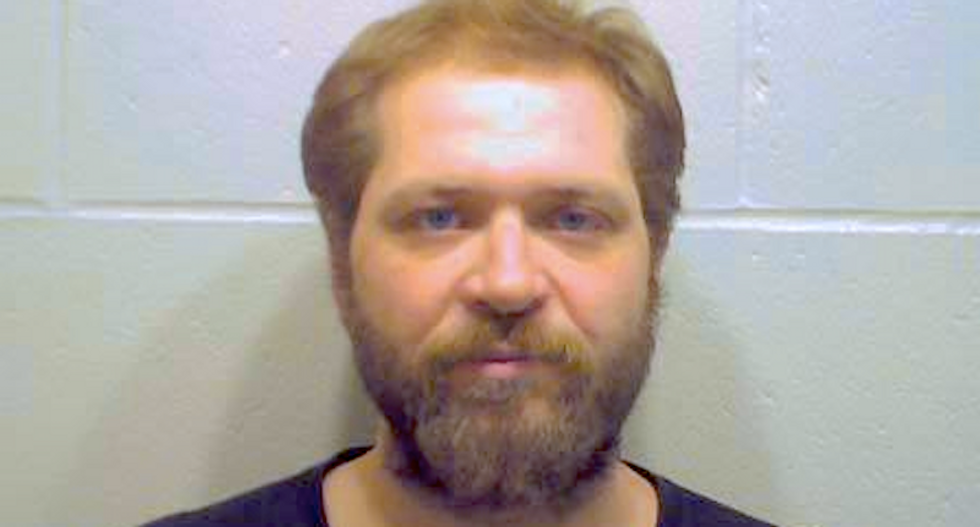 Bartholomew Schumacher, a convicted rapist and domestic abuser, is among the anti-abortion protesters complaining about an admitted Internet troll who's been annoying them outside a North Dakota women's health clinic.

Nik Severson said he's trying to make the abortion protesters feel as uncomfortable as they make the clinic's patients, holding a sign that reads "hail Satan," and he said the protesters have threatened him and called police on him at least five times.

"I feel like someone needs to have a voice for the women," Severson told WDAY-TV.

"It's a hard decision for these women to make this decision, and they don't need any more hateful messages," he added. "There's pictures of dead baby fetuses out here, and it's just a circus out here."

One of the protesters, Bartholomew Schumacher, complained that Severson won't listen to him.

"He just wouldn't engage," Schumacher said. "He just kept saying we're oppressive white men who want to control women's lives and stuff. I don't want that -- I just want protection of the innocent."

The 38-year-old Schumacher, however, was convicted of sexually assaulting a family member.

Police said he punched and raped the woman five years ago before binding her legs and hands with electrical tape and threatening and taunting her with a knife.

"She said while he was tying her up he was also kissing her and she thought it was a sick move and was very upset with the gesture," police said in their report.

He was convicted in 2011 of sexual imposition and must register as a sex offender until 2039.

Despite all that, the anti-abortion protester insists: "I stand for life."

Severson, the count-protester, said he was astonished to learn that Schumacher was a convicted sex offender.

"I went to the Clinic immediately, and told a group of ten 'Christians' who he was and what he had done to a woman," Severson told Jezebel. "They called me liar, they screamed at me to leave. I showed a few of them the article and still they denied it. They called the cops on me and the police officer confirmed that the man was who I said he was. The 'Christians' shook his hand and hugged him. It was the most disgusting thing I had ever seen in my life."

He called police earlier that same night to file a complaint against a man and his son who had been threatening him and gathering personal information about him, but he said officers never arrived and told him later they had been too busy.

"It was funny, when I was waiting for the police was when I found out about Schumacher being a rapist," Severson said. "Later, it only took ten minutes for the police to show up when the 'Christians' called me in for harassment. I have sacrificed the safety of my life to harass these people back."

He's hoping others will join his counter-protest, but the director of Red River Women’s Clinic said she would prefer that both Severson and the anti-abortion protesters would go away and leave patients alone.

Severson said he admires the volunteers who escort patients into the clinic, but one of those escorts said she doesn't trust the counter-protester or his motives.

"He repeatedly approached escorts and asked their names (and what woman *doesn’t* love having a stranger repeatedly ask, 'Hey, what’s your name? What’s your name?' as they are just trying to do what they’re doing?)," the woman told Jezebel. "Whenever people would stop to take pictures he would ask them to tweet at John Oliver so that he could get on John Oliver’s show. His actions made it pretty clear that he wasn’t there for the women but for himself."

Severson, who described himself as a "keyboard cowboy" who trolls political foes through Facebook, admits he just wants attention.

"Of course the goal is to gather attention," he said. "I don’t like 'Christians' using God to shame women. I want their faces plastered all over the internet. I also need the attention to gather others to my cause. So far, I think I have been successful."