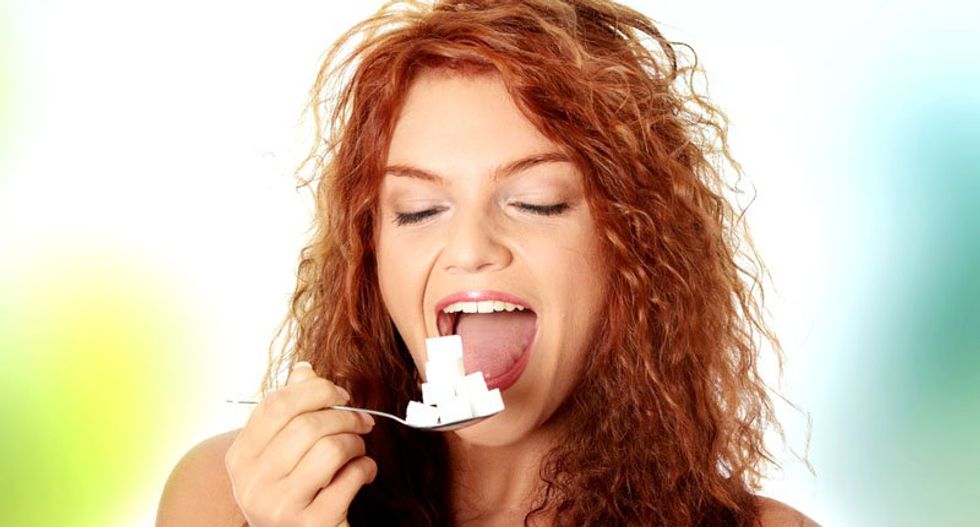 Children are manifesting increased rates of adult diseases like hypertension or high triglycerides. And they are getting diseases that used to be unheard of in children, like Type 2 diabetes and fatty liver disease. So why is this happening?

Everyone assumes this is the result of the obesity epidemic – too many calories in, too few out. Children and adults are getting fat, so they’re getting sick. And it is generally assumed that no one specific food causes it, because “a calorie is a calorie”.

I’ve been studying the role that sugar plays in contributing to chronic disease for years, and my research group at the University of California, San Francisco has just published research in the journal Obesity that challenges this assumption. If calories come from sugar, they just aren’t the same.

Diabetes is increasing faster than obesity

It’s clear that the cause of rising rates of health conditions like Type 2 diabetes isn’t as simple as people just eating too many calories.

And certain countries are obese without being diabetic (such as Iceland, Mongolia and Micronesia), while other countries are diabetic without being obese (India, Pakistan and China, for instance). Twelve percent of people in China have diabetes, but the obesity rate is much lower. The US is the fattest nation on Earth and our diabetes prevalence is 9.3%.

While 80% of the obese population in the US is metabolically ill (meaning they have conditions like diabetes, hypertension, lipid problems and heart disease), 20% is not. Conversely, 40% of the normal weight population has metabolic syndrome.

If normal weight people have these conditions, how then are they related to obesity? Indeed, we now know that obesity is a marker rather than a cause for these diseases.

Epidemiological studies have found a correlation between added sugar consumption and health conditions like cardiovascular disease. So could cutting excess sugar out of our diets reverse metabolic syndrome?

What happens when you stop feeding kids added sugar?

Our group at UCSF studied 43 Latino and African-American children with obesity and metabolic syndrome over a 10-day period. We started by assessing their metabolic status – insulin and glucose levels, as well as blood fats and other markers for disease, like lactate and free fatty acids – on their home diet.

For the next nine days, each child ate an individual tailored diet. We catered their meals to provide same number of calories and protein and fat content as their usual home diet. We gave them the same percentage of carbohydrate, but we substituted starch for sugar. The big difference: this special diet had no added sugar. This means their diet had no sugar from sugarcane or high fructose corn syrup. The kids consumed foods such as fruits and other whole foods that naturally contain some sugar. These foods also have fiber, which reduces the rate of sugar absorption, so they don’t affect the body the same way that added sugar does.

We took chicken teriyaki out. We put turkey hot dogs in. We took sweetened yogurt out. We put baked potato chips in. We took donuts out. We put bagels in. We gave them unhealthy processed food, just with no added sugar. Each child was given a scale to take home, and if their weight was declining, we made them eat more. Then we studied them again.

The children had eaten the same number of calories and had not lost any weight, and yet every aspect of their metabolic health improved. With added sugar cut out of their diet for 10 days, blood pressure, triglycerides, low-density lipoprotein (LDL, or “bad cholesterol”), insulin sensitivity and glucose tolerance all improved. And remember, we weren’t giving them just leafy greens and tofu – we fed the kids processed foods, just ones without sugar.

Further studies are needed to see if this will also work in adults, and if the benefits are short-term or long-term.

This study demonstrates that a calorie is not a calorie, and that sugar is a primary contributor to metabolic syndrome, unrelated to calories or weight gain. By removing added sugar, we improved metabolic health.

Sugar may not be the only contributor to chronic disease, but it is far and away the easiest one to avoid. Kids could improve their metabolic health – even while continuing to eat processed food – just by dumping the sugar. Can you imagine how much healthier they’d be if they ate real food?

The naysayers will say, “But sugar is natural. Sugar has been with us for thousands of years. Sugar is food, and how can food be toxic?"

material consisting essentially of protein, carbohydrate, and fat used in the body of an organism to sustain growth, repair, and vital processes and to furnish energy.

Sugar by itself furnishes energy, and that’s about it. In that sense, sugar is like alcohol. It’s got calories, but it’s not nutrition. There’s no biochemical reaction that requires it. And at high doses, alcohol can fry your liver.

Same with sugar. Fructose, the sweet molecule in sugar, contains calories that you can burn for energy, but it’s not nutrition, because there’s no biochemical reaction that requires it. In excess, it can fry your liver, just like alcohol. And this makes sense, because where do you get alcohol from? Fermentation of sugar.

Too much sugar causes diabetes, heart disease, fatty liver disease and tooth decay. When consumed in excess, it’s a toxin. And it’s addictive – just like alcohol. That’s why children are getting the diseases of alcohol – Type 2 diabetes and fatty liver disease – without alcohol. But our research suggests we could turn this around in 10 days – if we chose to.