Tenn. county to consider resolution begging God to spare them 'His coming wrath' over same-sex marriage 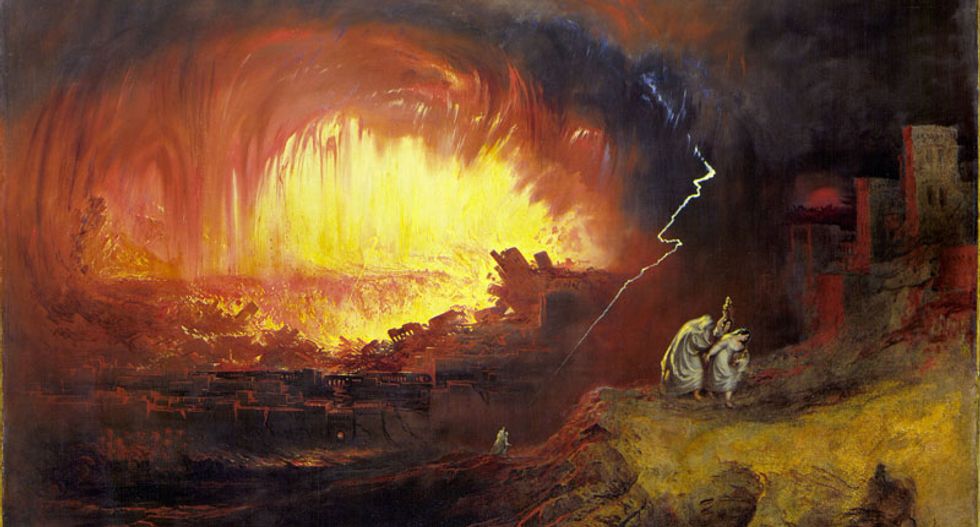 The Destruction of Sodom and Gomorrah, John Martin, 1852. (WikiCommons)

On Monday, the Blount County Board of Commissioners will consider a resolution asking God to spare their region from "His coming wrath" because the "lawless judiciary" of the U.S. is forcing them recognize same-sex marriages.

The proposal has been put forth by Commissioner Karen Miller and is listed on the docket as "Resolution condemning judicial tyranny and petitioning God's mercy. (Resolution 15-10-006)"

The resolution begins: "Whereas, the Governor, Attorney General, and ALL WE Blount County Legislators have sworn an oath consistent with the moral Law of God (“So Help Me God”) to uphold the Constitution of Tennessee and the Constitution of the United States; and Whereas, the fulfillment of this oath, in the American tradition, may not be read to contradict the written Constitution, Justice, Reason and higher Natural Law..." before turning to Commissioner Miller's grievances.

"Federal judges have once again usurped powers not delegated to them, and have violated Reason, the Rule of Law and Natural Law by purporting to strike down State laws and acts of the People recognizing and protecting Natural Marriage," it states by way of explaining that Miller believes the Supreme Court overstepped its bounds by legalizing same-sex marriage.

Miller's resolution calls upon "all of the Officers of the State of Tennessee, the Governor, the Attorney General, and the members of the Tennessee Legislature," to  join the commission in saving "natural marriage," and defending "the the Moral Standards of Tennessee."

Fearing that may be too little too late, the passed resolution would also beseech God to not destroy Blount County -- like He did Sodom and Gomorrah -- for the sins of America.

"WE adopt this Resolution before God that He pass us by in His Coming Wrath and not destroy our County as He did Sodom and Gomorrah and the neighboring cities. As the Passover Lamb was a means of salvation to the ancient Children of Israel, so we stand upon the safety of the Lamb of God to save us, " the resolution reads. "WE adopt this Resolution begging His favor in light of the fact that we have been forced to comply and recognize that the State of Tennessee, like so many other God-fearing States, MAY have fallen prey to a lawless judiciary in legalizing what God and the Bible expressly forbids."

Presumably God will hold off His wrath until the resolution can be considered as it is listed as seventh on the docket -- right after the board takes up compensation levels for Blount County School Board Members.